FRIDAY FLAVOR: The history behind the 'Norfolk Dog'

Hampton Roads has a history with one hot dog that dates back to the early 1930s. However, there was a scare that the life of the 'Norfolk Dog' would be short-lived. 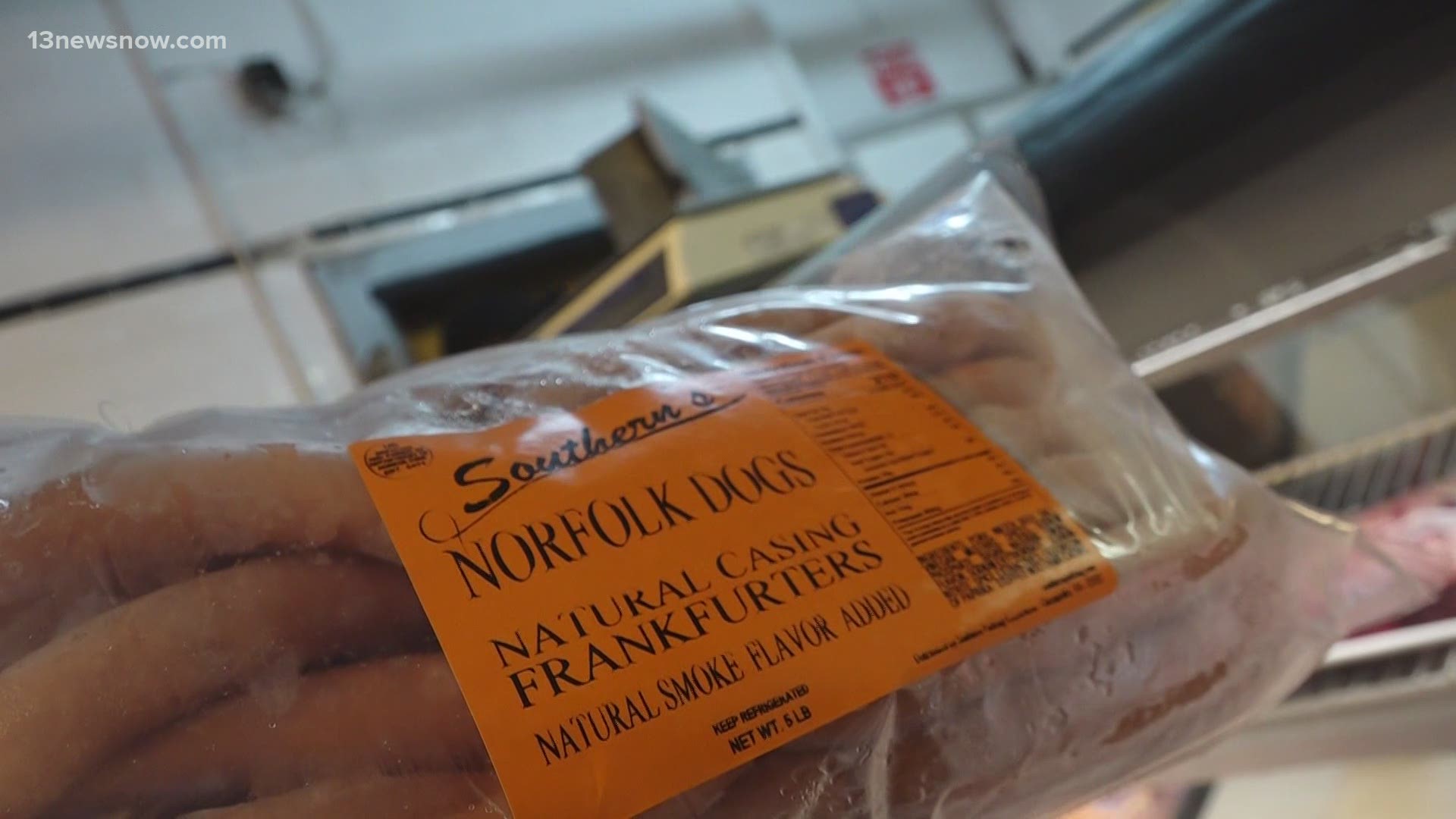 CHESAPEAKE, Va. — In 1937, Southern Packing Corporation opened in Downtown Norfolk near what is now Harbor Park. Back then, this family-owned business was a full-on slaughterhouse supplying meats to locals across Hampton Roads.

"We stopped the slaughtering and now we are a full-service retail company, and then we provide our retail stores for customers that come of the street as well," explains Todd Goldman, the current owner, and great-grandson of the original owner.

Southern Packing Corp. is currently located in Chesapeake, sitting almost on the North Carolina line. But, stepping inside, it's still a simple, family feel. They serve and sell various meats and cuts to businesses and wholesale if you'd like to stop by and grab something for dinner.  Their hours are just as regular as the building: 7 a.m. - 4:30 p.m.

However, behind the counter, there's more history than known of the owners knew they'd be a part of, and that's the story of the "Norfolk Dog."

"In the early 1930s, George Bacalis started in Downtown Norfolk selling a natural skin hot dog, and it became known as the 'Norfolk Dog.' Not so much the hot dog itself, but how it was prepared. It's a steamed hot dog bun, Lynnhaven-brand mustard, and a hot dog chili. Every hot dog place has their own secret recipe," Goldman started telling the back story with a smirk.

He went on to say that Bacalis' employees then branched out and created their individual hot dog spots.

"There was the original Tony's on Lafayette Boulevard in Norfolk. Then, he had two sons that opened up their own place. And then Jimmy's, which used to be on Euclid, started with Bacalis also," Goldman reminisced.

These are spots that have closed, but the names are all too familiar for longtime Hampton Roads residents.

There may have been different spots across the area with other toppings and chili variations, but one thing was constant at each location: the foundation of the hot dog. The Norfolk Dog was a Hormel tough-skin hot dog. Hormel sold this product in Virginia and nowhere else in the country.

Years have now gone by and Southern Packing Corp. had taken over the business from another meatpacking company and was now the primary supplier of the Hormel dogs for Hampton Roads. After decades of booming business, in December of 2018, Goldman got a gut-wrenching visit.

"Our Hormel rep came to us and said, 'I've got some bad news. We are no longer going to be making the Hormel tough-skin hot dog,'" he paused and took a breath as if he was reliving the moment. "So, that presented a litany of problems. I would be lying if I said selfishly I'm thinking about the amount of business we're going to lose out on. But then it [his thought] was these hot dog restaurants. That's what they do," his face scrunched in concern as he recounted the emotions from 2018.

Goldman called his dad -- who was the former owner -- and his dad's immediate response was to buy as much of the Hormel hot dogs as he could.

So, Goldman did just that. He said he purchased about 500 cases from Hormel and knew he needed to figure something else out.

"My cousin Ron who is my partner, called up a company up north who was already making sausage for us that we were selling to these same restaurants and got them to agree to attempt to recreate this hot dog," Goldman chuckled.

That recreation was time-consuming, "We probably went through four or five different batches. The natural casing would give the dogs a snap, so some people call them 'snappy dogs' also. The first batch, the snap wasn't snappy enough, the second batch, there was too much salt, the third batch, there wasn't enough smokey flavor," Goldman walked through each failure.

These trial hot dogs were being tested and tasted by the restaurant owners that Goldman was trying to please, and he said that wasn't easy.  All this was happening as the Hormel stash Goldman had stockpiled was dwindling.

As the panic was setting in, Goldman brought his clients the fourth trial batch. That's when it all clicked. The fourth batched pleased most of his clients, and he knew he had done it. He had created the new Norfolk Dog.

"With all the publicity back then, we had a huge calling through our retail store. Customers can come in and buy whole 10-pound boxes. They can buy 5-pound packages. And it's been rolling ever since. We've had just as much success with this product, if not more than we had with the Hormel brand. So we haven't skipped a beat," Goldman smiled proudly.

The original hot dog spots are no longer up and running, but some have stepped into the shoes of people like Tony and Jimmy. That means the Norfolk Dog continues to live on in the next generation, and Todd Goldman has a legacy that lives on among the restaurant owners.

When asked if there's anything else he's like to add, Goldman laughed, breathed in, and said, "These hot dogs are life to some people. We get calls and requests literally every day."

To visit Todd Goldman at Southern Packing Company, you can go to 4004 S Battlefield Blvd, Chesapeake, VA 23322, or visit their Facebook page.