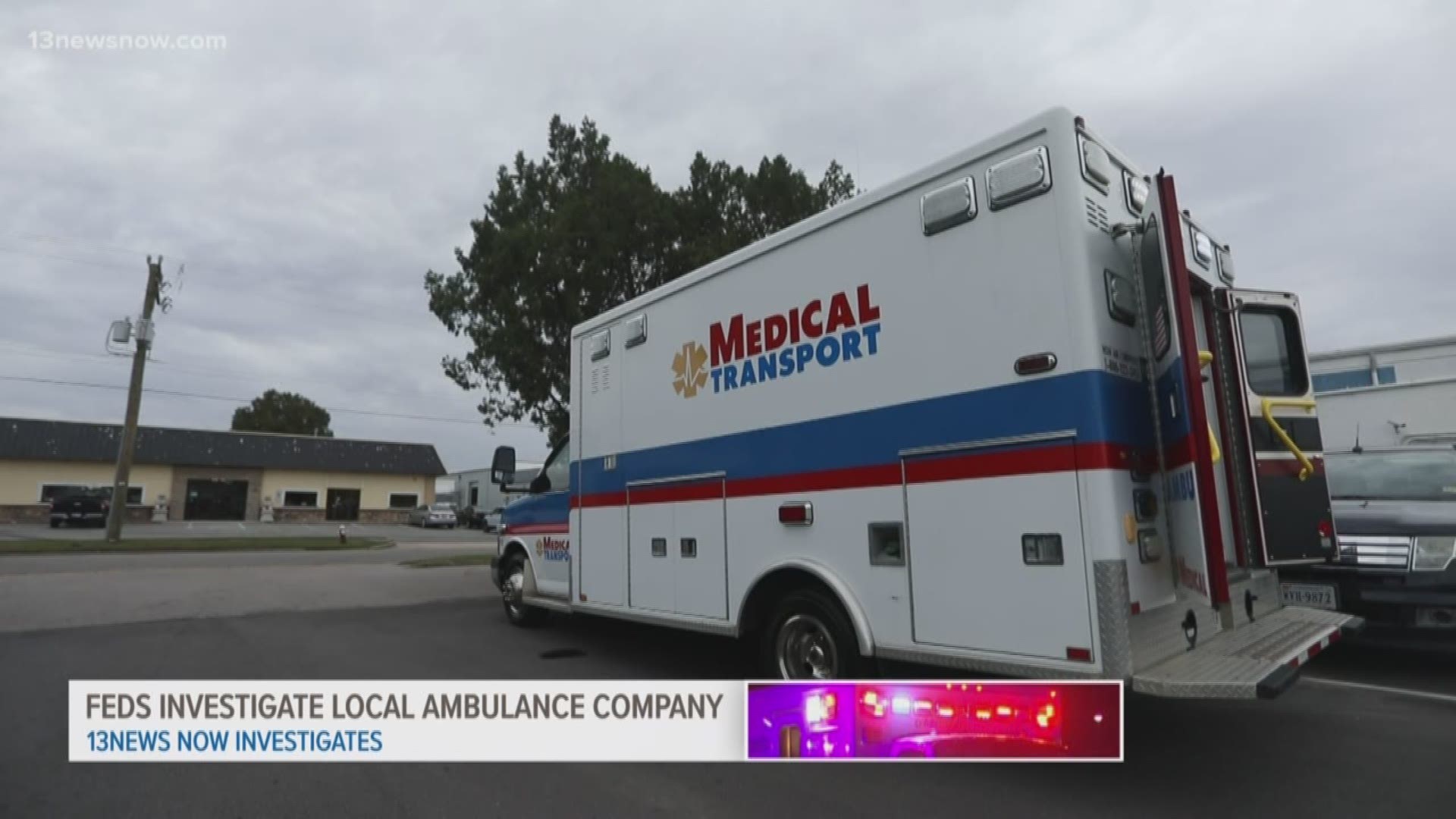 VIRGINIA BEACH, Va. — Medical Transport LLC provides about 500 ambulance rides each week. The Sentara Healthcare-owned company operates as a non-emergency ambulance service for people too weak or sick to travel in a car.

From 2011 to 2014, Medical Transport drivers took thousands of patients to their appointments who didn’t need to travel in an ambulance, according to the United States Department of Justice.

“We made an honest mistake for which we paid dearly," Medical Transport and Sentara spokesman Dale Gauding said.

Medical Transport staff billed taxpayer-funded programs like Medicare and Medicaid for millions of dollars in reimbursements.

After a federal investigation and years of legal negotiations, the company settled with the government for $9 million in March of 2018. Gauding said Medical Transport ‘misinterpreted’ the rules.

“This was an error, this was a mistake, this was a costly lesson, and now we’re doing business better and in compliance with all of the Medicare regulations," he said.

Gauding said the company now has a new compliance manager and compliance committee. He emphasized that the original mistakes did not involve quality, care or safety, only focusing on whether a patient was eligible for ambulance transport.

As part of the settlement, Medical Transport is now being watched closely by the U.S. Department of Health and Human Service Office of Inspector General through a 5-year monitoring program called a Corporate Integrity Agreement.

Any new problems and the company could face harsher punishments. That’s where there’s a growing concern.

A PCS form is commonly used for a doctor to sign off that a patient must be transported by an ambulance. For example, a kidney dialysis patient could be eligible for ambulance transport for up to 90 days. The form is normally only applicable for a limited amount of time.

However, Dale Gauding said he could not discuss PCS forms or any other details in the documents. He did confirm the existence of an investigation, saying the company is currently under an active federal investigation by the HHS-OIG.

“There is an investigation of one narrow aspect of our operation and because it is a current investigation it is a confidential matter until the Office of the Inspector General says that it’s not," Gauding said.

The internal documents instruct employees to not delete any files as part of the investigation. An HHS-OIG spokesperson also declined comment in a statement, saying: "As a matter of standard investigative practice the Office of Inspector General neither confirms nor denies investigations that may - or may not - be pending before the agency."

“People who use those programs are hurt because there are a limited number of dollars and if they’re used improperly it’s taking it from one thing and using it for something else," McInnis said.

He said a $9 million settlement is significant and one of the largest he's seen.

"This is part of a larger problem of healthcare fraud, one of the biggest expenditures in our budget for Medicaid programs," he said. "It's our tax money that's ultimately going to somebody who doesn't deserve it."

The Centers for Medicare and Medicaid Services installed a pre-authorization system for non-emergency ambulance transport patients in 2016, which Gauding said will help decrease the 'misinterpretations' of ambulance eligibility.

“Our goal is safe and compassionate patient transport and full compliance with every federal regulation that applies to our business, and we’re doing everything we can to remain in compliance going forward.”

Gauding said the general public should trust Medical Transport now because of the current government oversight, even with the ambiguity of the current federal investigation.

"We’re under more scrutiny from the federal government than we have ever been in our existence, that’s why they can trust [us]," Gauding said.

Medical Transport is currently subject to annual reviews under the CIA, which will expire in 2023.