Groundbreaking surgery changes a local woman's life and could have a big impact in the Hampton Roads medical community. 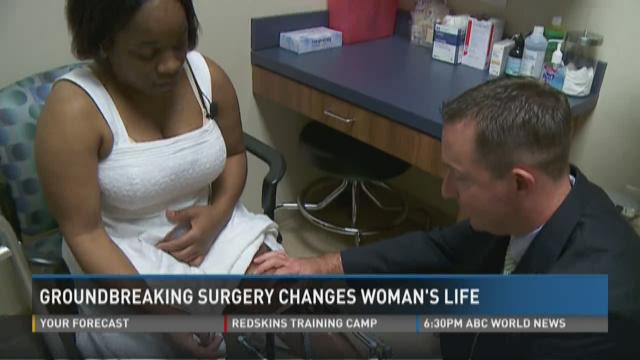 HAMPTON ROADS, Va. (WVEC) -- For most of her life, 37-year-old Natashia Christian has had to live with bowed legs. It's a condition that comes along with her genetic form of Vitamin D resistant rickets. Her son also has the condition.

While surgeries are working for him, Natashia hasn't had much luck. That is until she met Dr. Michael Campbell with Atlantic Orthopedic Specialists a year and a half ago. He knew there was a new procedure that could help her.

The hexapod external fixator had just gained FDA approval. While it had been used in other countries to correct bone deformity, Dr. Campbell is the first U.S. doctor to use the Hexapod on the upper and lower leg together.

He says this procedure is groundbreaking because "it's an exceptionally powerful tool and sometimes it gives you the opportunity to fix problems and correct deformities that otherwise would have been challenging or impossible."

Dr. Campbell did the first surgery on Natashia last year to straighten her right leg. Almost one year to the day she was wheeled into the operating room at Sentara Leigh Hospital to straighten her left leg. This time, he only had to use the fixator on the lower part of her leg. That's because she's already has a rod in her femur.

We caught up with Natashia almost three months post surgery. While she was still wearing the fixator she said she was already amazed at the difference she could see.

She said, "I just keep looking at it cause all my life I had bowed legs and no matter what the doctors did to try and straighten it just tended to bow right back out. Now it's like it feels like it's going to stay."

Dr. Campbell says the bones should stay in place. The fixator actually helped to align Natashia's legs properly and allowed her to grow bone to fill in where needed. That made Natashia three inches taller and more importantly, Dr. Campbell says for the first time her legs are actually straight.

He says, "It's one of these times when you really see the difference. I have this video of her walking before the first time we met on the first office visit and now when you look at her legs and you see how straight they are I know that it means that her knees, her hips her ankles and her femurs and stuff like that are going to last longer and work better."

That means Natashia can now start working on the things she wants to do, like going back to school to become a nurse. She's already taking classes online. She says she has a list of things she now plans to accomplish.

Dr. Campbell is happy to see all the changes this surgery has brought about for Natashia. But he's also excited because he knows what groundbreaking surgery like this means for all of us here in Hampton Roads.

He says, "A lot of times these types of problems are referred out to centers in big cities. Now we have the ability to do it right here in town."