At Hampton Roads Hyperbaric Therapy, Sarah Stoltman has treated more than 50 Hampton Roads veterans. Many of them with various levels of traumatic brain injury. 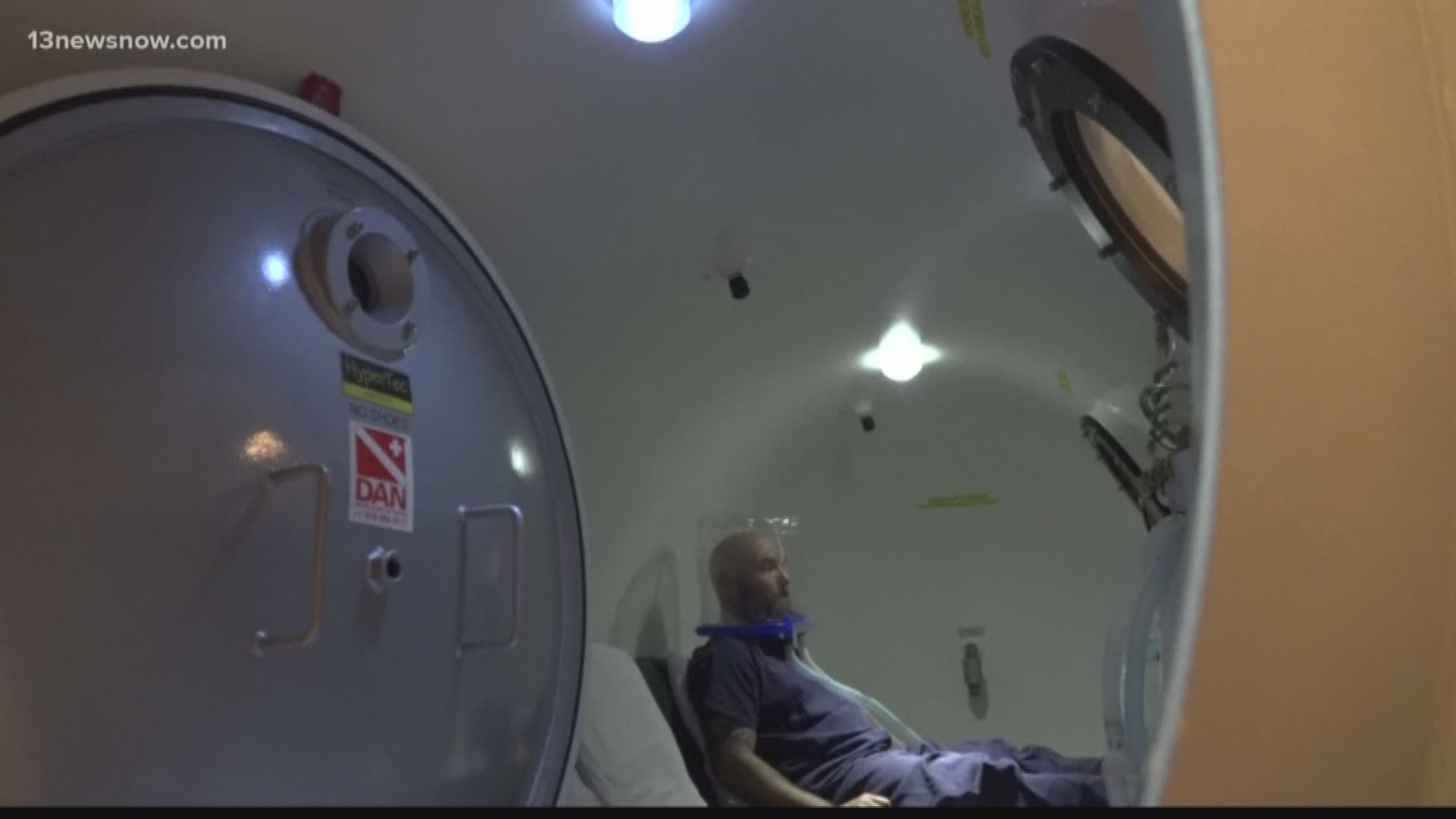 Hyperbaric Oxygen Therapy is commonly used to help divers with decompression sickness, or the "bends."

It uses a pressurized chamber filled with 100 percent oxygen to remove air bubbles from a person’s blood.

At Hampton Roads Hyperbaric Therapy, Sarah Stoltman has treated more than 50 Hampton Roads veterans. Many of them with various levels of traumatic brain injury.

“It’s like a gray version of themselves when they come in,” said Stoltman. “When patients get a mild traumatic brain injury it knocks blood flow out of certain areas of the brain.”

“There may be some dead tissue but most of the tissue is just lacking enough oxygen so it kind of goes into hibernation mode,” Stoltman said. “This can go on for years and years and years.”

“I am an eight-and-a-half year Navy veteran,” said Skarin. “I served another six years in the Air National Guard. So, I’ve got roughly 14 years of military service.”

Skarin was an aircraft firefighter, “and you know you’re talking about a jet idle at 120 decibels and this thing is going into full afterburn — and you're 10 feet from it and it feels like it's shaking the teeth out of your jaw.”

He has been waiting about a year and a half to get this treatment because he gave up his spot for another veteran that he thought needed it more even though living with traumatic brain injury wasn’t easy for him.

He said “nobody could explain what was going on with me.”

So, for 40 treatments over 8 weeks, Skarin documented his journey on Facebook Live at Hampton Roads Hyperbaric Therapy.

Stoltman gave Skarin a test to measure his brain function before and after 8 weeks. She said he had a 58 percent improvement in his cognition after completing treatments.

Right now insurance and the VA consider these treatments experimental.

“For eight weeks seeing the changes, I was just like why is this not covered? This is an amazing treatment and these people are getting their lives.”

In January the Department of Defense released a report rejecting the effectiveness of Hyperbaric Oxygen Therapy for mild traumatic brain injury in service members.

“I personally believe that hyperbaric will be a covered indication for a traumatic brain injury in the future. It is in other countries,” said Stoltman.

Research Psychologist Tom Fox has been in the clinical Hyperbaric Oxygen field for 30 years.

He believes the Department of Defense does not support hyperbaric oxygen therapy to treat veterans for mild traumatic brain injury because of the cost.

"If you look at the estimates of this, 40 percent of those that have served in the theater of combat for four months or greater could be at risk for this and if you multiply that out, that gives you a figure of about 800,000 to 1.2 million,” Fox said.

He added mild traumatic brain injuries can be caused by dramatic pressure changes like an explosion in combat.

Those big pressure changes also cause neurological decompression sickness like divers get and is treated with Hyperbaric Oxygen Therapy.

“There’s significant change from base line and all these guys deliver,” said Fox.

Patients like Skarin said they’ll keep advocating for Hyperbaric Oxygen Therapy treatment for veterans because the results are greater than words.

He said the best part of the treatment is “feeling human again, feeling like I’m going to be OK.”