Mayor Kenny Alexander said the Confederate monument in Downtown Norfolk would be removed from its location on Commercial Place. 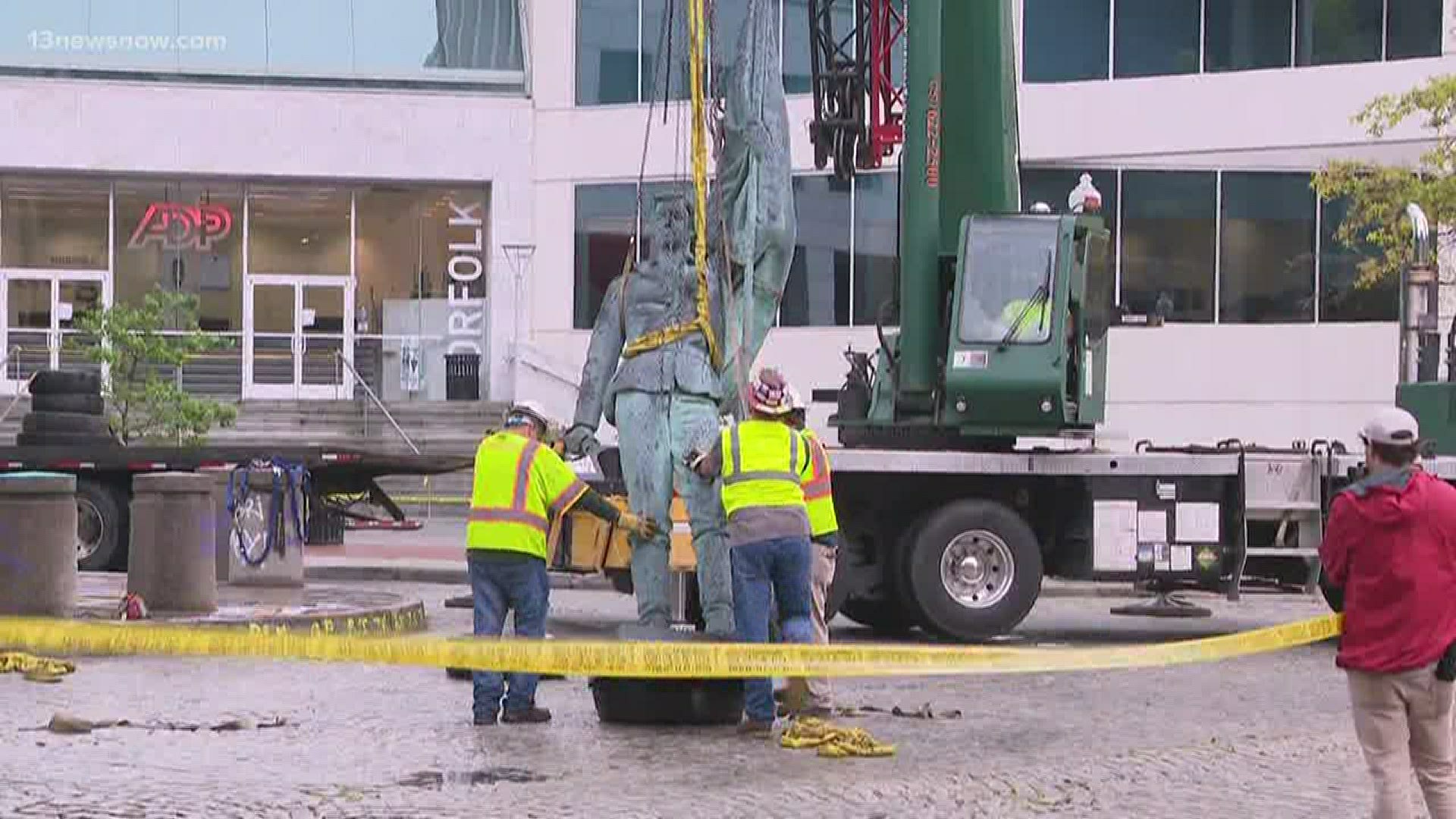 NORFOLK, Va. — Early Friday morning, crews removed the "Johnny Reb" statue that has stood in Norfolk for more than 100 years.

The removal came a little more than 12 hours after Mayor Kenny Alexander said the city's Confederate monument would come down. Alexander said Thursday night the process would start within 24 hours, weather permitting.

Crews had cranes in place to begin the removal. By 7 a.m. Friday, "Johnny Reb" was on the ground.

For years, the city had been working on a potential move of the statue and the column on which it stood.

Legislation passed in the Virginia General Assembly's 2020 legislative session gave cities and counties the ability to move Confederate and other war memorials without the state's permission. Prior to that, municipalities needed the OK from Richmond.

The amended law doesn't take effect until July 1, but Alexander said the interest of public safety outweighed waiting for that date.

Andre Case, a local of Norfolk woke up extra early to witness the historical moment.

"I came down at about 5:25 a.m. when the trucks pulled up and it was pouring down raining, but I wanted to see because this is only going to happen one time so it's history in the making," he said.

"I believe that this is a solid statement that a lot of people are behind and I feel like taking it down represents who we are more than having it up," Norfolk local, Carrie Short said.

Vincent Hodges who lives in Ghent was proud to see the city take action and remove the statue.

"It's a big deal because we know as a black culture that these monuments were put into place to keep us out. They were warning signs after the civil war ended so for the city to take them down and take action means more than anything," he said.

Alexander said the Virginia Division of the Sons of Confederate Veterans did not oppose the proposed move to Elmwood Cemetery where the monument will stand amongst the graves of Confederate soldiers.

A public hearing is planned for July 7, 2020, regarding the ultimate disposition of the statue and monument. Alexander said the city will observe the required 30-day period to receive further comment prior to making a final decision.

When Alexander talked about the interest of public safety, he said the events that happened at the Confederate monument in Olde Towne Portsmouth on Wednesday (June 10) expedited the decision to remove the memorial.

It was during a protest at the Portsmouth monument that people pulled down a statue of a Confederate soldier. The statue landed on top of Chris Green who was at the demonstration.

Alexander said "Johnny Reb" would be put into storage. Crews would work over the course of weeks to dismantle the column upon which it stood.

The city believes the monument was erected in the late 1800s or early 1900s and stands 80 feet tall.

On Thursday evening, a small group of protesters gathered at the base of the monument. Some spray-painted graffiti on it. A few they planned to be present when the statue came down.