A sailor who is stationed aboard USS Harry S. Truman surprised his three children who didn't know the aircraft carrier returned to Naval Station Norfolk from deployment. 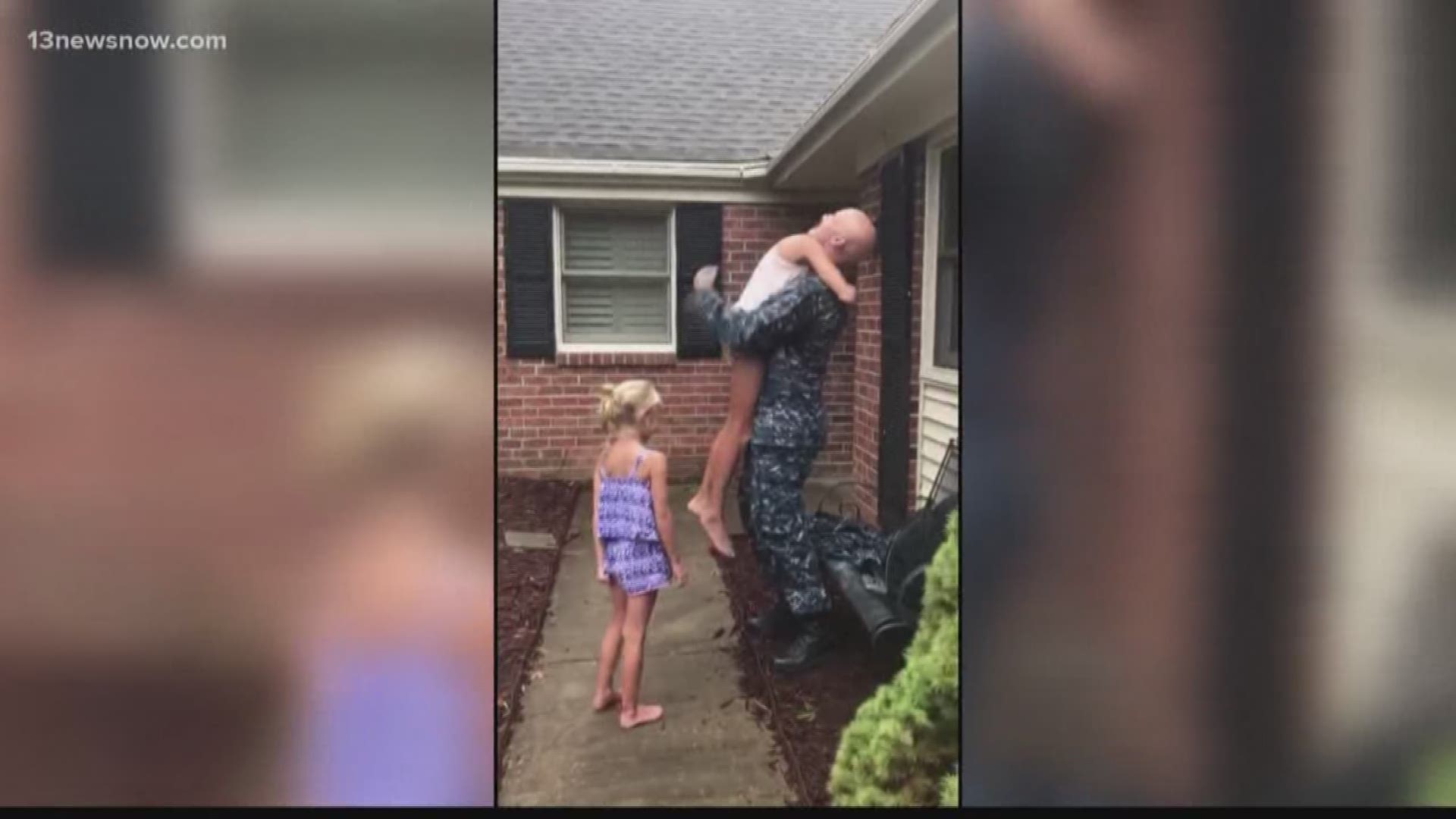 VIRGINIA BEACH, Va., (WVEC) — A sailor who returned from deployment aboard USS Harry S. Truman surprised his children Saturday afternoon, and their reunion was captured on video.

The video, which was posted on Facebook, shows Brian Virgili's children coming outside of their house and their reaction as they saw their dad there, waiting.

Brian's wife, Jessica Virgili, said keeping the surprise a secret from her children took some maneuvering.

"They're younger so they don't watch the news," she said when she found out about the Truman's early return home.

"They don't have or use social media, so they wouldn't have seen it."

The oldest son Logan was away at camp, so he wasn't aware of the carrier's early return, Jessica said.

She said the hardest part in not giving away the surprise: keeping the house clean.

"I'm trying to keep the house clean and I can't tell them why," Jessica said.

"I kept telling them 'let's get your room clean.' And my son was begging me to take him to 7-Eleven but the whole time I'm thinking 'hurry up.'"

The surprise involved Jessica's mother-in-law picking up her husband and bringing him home.

Around 3 p.m., Brian called his wife to let her know he was waiting outside their Kempsville-area home.

Jessica's first attempt was to tell her youngest daughter Sophie to get the mail.

"She was like 'I don't want to check the mail," Jessica said.

Sophie had her reasons for not going to the door. "I was tired,” said Sophie.

After telling Sophie it was an Amazon package, her daughter went outside to find her father in uniform waiting patiently on a bench.

That's when middle child Chloe came outside and immediately began to cry after seeing her father.

"It's really exciting, because he's been gone for a very long time," said Chloe.

"She got everybody crying," Jessica said. Logan and then Jessica followed and gave Brian big welcome-home hugs.

The family enjoyed the rest of their Saturday with a cookout, and Brian gave his children gifts from overseas. The kids collect currencies their father brings home from his deployments.

Logan also had the chance to tell his father about his adventures at camp, Jessica said.

Brian Virgili has served the U.S. for 18 years, and was thrilled to be reunited with his family.

"I'm ready for it, you know what I mean. I'm ready for it and they're not. They don't know when I'm coming home... so when I come home early, it's always a good time," said Brian.