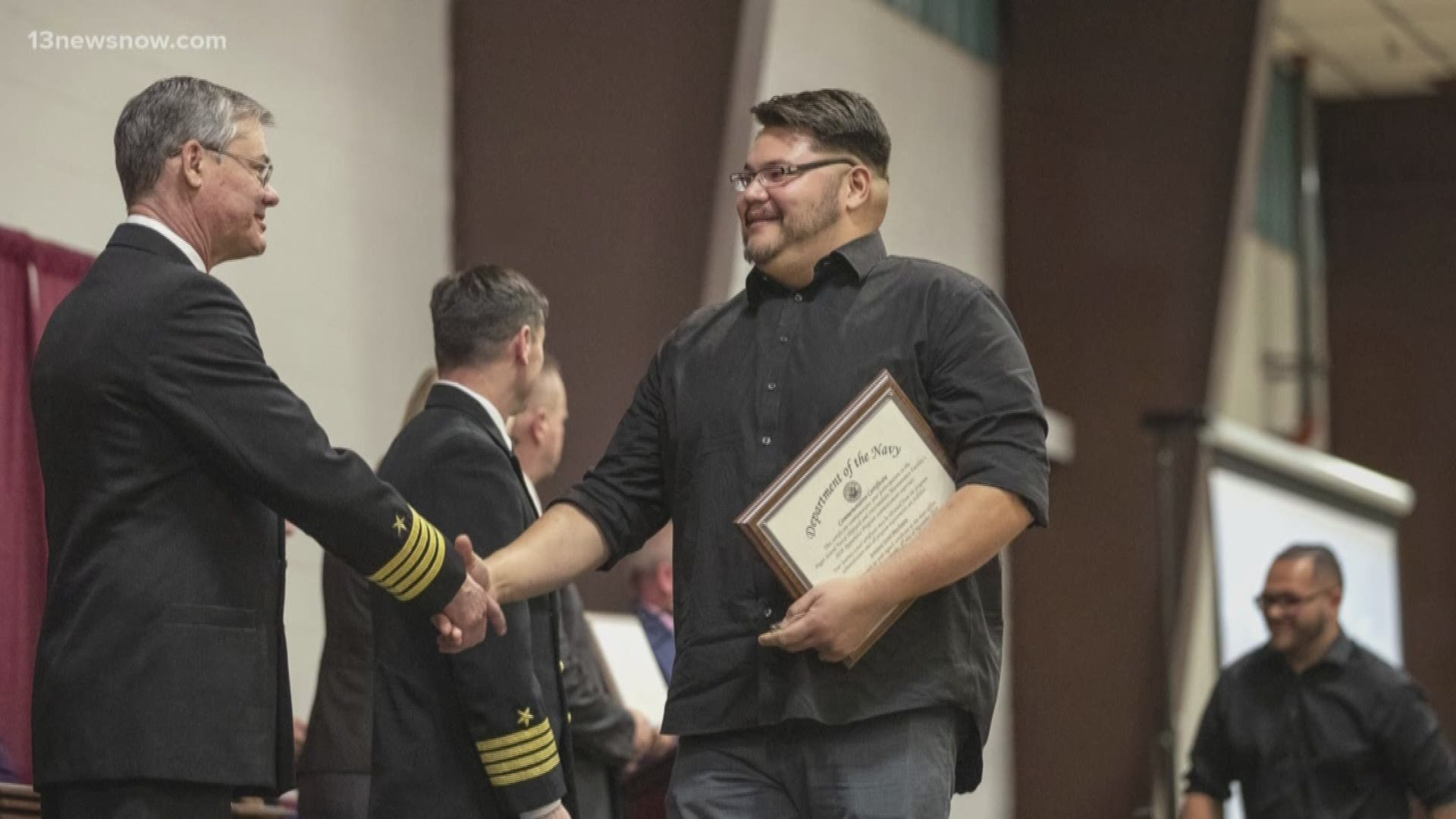 PORTSMOUTH, Va. — Norfolk Naval Shipyard held an Apprentice Graduation and Awards Ceremony on Tuesday for the 241 students who completed a four-year training program.

The students, who represent 24 trades across the shipyard, received a Technician Career Studies Certificate and were converted to the journeymen level of their trade after the ceremony at Chrysler Hall.

It comes at a good time for the Navy.

A report last year regarding the country's four naval shipyards, from the Government Accountability Office, found that between 2012 and 2018, only 30% of maintenance was completed on schedule. The report said the backlog is caused by insufficient capacity in public yards as well as shortages of shipyard workers.

The Navy is now focused on finding and getting more workers qualified more quickly.

That is where the NNSY Apprentice Program, in partnership with Tidewater Community College, comes in.

"There's talent out there," said Apprentice Program Director Colby Tynes. "Now it's up to us to find that talent and bring them to Norfolk Naval Shipyard."

The grads are excited, and they know the role they'll play is crucial.

"Working within the Norfolk Naval Shipyard, it gives me gratification knowing that I played a role in getting the ships out to sea," said Aisha Clark.

Jacob Burrell said: "It has to go out right the first time, every time, because we want them to be able to accomplish their mission wherever they go."

Matt Waters added: "If the ships don't meet deadline, if we don't get the work done with the first time quality in mind,then they don't perform to the best of their ability or worse, we could have casualties of our sailors, and that directly affects the mission of the U.S. Navy."

The graduation took place at 6 p.m. at 215 St. Pauls Boulevard in Norfolk.

"Congratulations to the graduates of Norfolk Naval Shipyard's Apprentice Class of 2019!” said Shipyard Commander Capt. Kai Torkelson. “People are at the heart of what we do to accomplish our mission. America's Shipyard needs you now more than ever to develop to your full potential to be part of a high performing team. Together, we will achieve excellence in the repair and modernization of ships and submarines."

The Apprentice Program Class of 2019 valedictorian, Waters, is a Shop 38 marine machinery mechanic. The 29-year-old Western Branch High School graduate finished the NNSY Apprentice Program with a 3.914 GPA, which also earned him an early promotion.

RELATED: 157 apprentices graduate from The Apprentice School in Newport News

This year marks the 106th anniversary of NNSY’s Apprentice Program, one of the most historic and honored apprentice programs in the nation. The program has been recognized by the U.S. Department of Labor, in partnership with the Secretary’s Advisory Committee on Apprenticeship (ACA), as a 21st Century Registered Apprenticeship Trailblazer and Innovator.