Great white gone? Mary Lee was more than a tweet

The 16-foot, 3,456 pound shark hasn't pinged since June 17, leaving many followers wondering what happened to the apex predator. 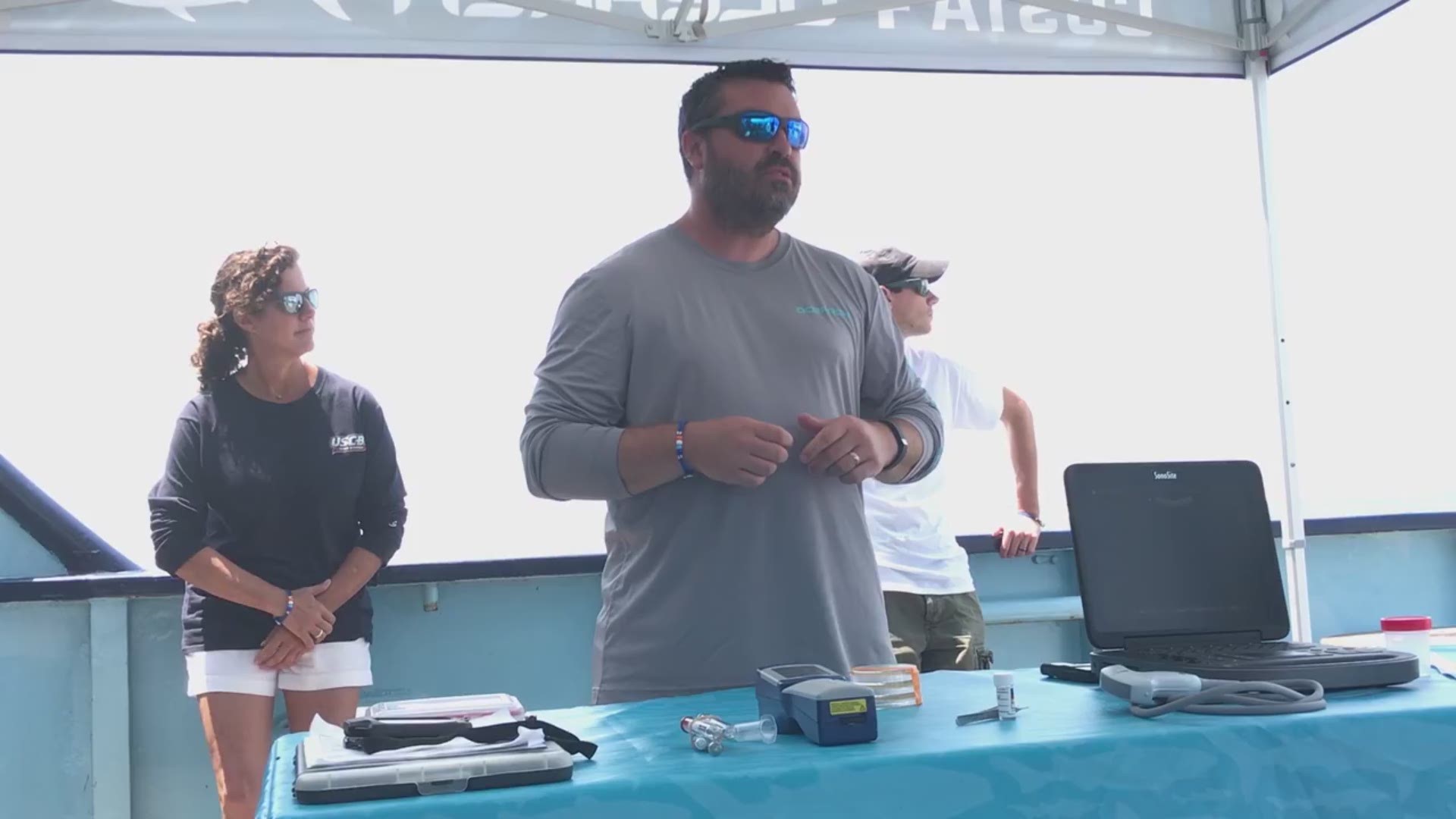 ASSATEAGUE ISLAND, Va. (Delmarva Now) -- Mary Lee gained local fame along the Eastern Shore for her frequent visits around Memorial Day, but her Twitter account with over 128,000 followers suggests the famous great white shark was a favorite all over.

But the 16-foot, 3,456 pound shark hasn't pinged since June 17, leaving many followers wondering what happened to the apex predator.

"We might hear from her again, but we might not. Her tag may have run its course," said Chris Fischer, founder of OCEARCH, an organization dedicated to the telemetry, conservation and study of keystone marine species.

The organization tags and tracks sharks, allowing users to follow along online.

But Fischer was worried whether Mary Lee was alive or not.

"She's the queen of the ocean," Fischer said during an interview with the Asbury Park Press. "She's a 50-year-old or so mature white shark that absolutely dominates wherever she goes."

Credit: OCEARCH tweet
The great white shark Mary Lee tracked is often tracked near the Eastern Shore an Outer Banks. This photo is of her tagging on Sept. 17, 2012.

Jim Ware, a journalist with the Wilmington Star News in North Carolina, runs the social media account for the famed shark. He agreed with Fischer that it is likely Mary Lee's tag ran out of batteries.

"The lifespan of the tag when the account first started was four years, so to get five years is amazing," Ware said.

A ping occurs when the shark's fin breaches the surface. Mary Lee's most recent ping came off the coast of southern New Jersey during her yearly trek north.

One of the final times she pinged near Delmarva was on May 23, which was off the coast of Assateague Island.

Mary Lee has to keep her dorsal fin above water for 90 seconds in order for it to be picked up as a ping. She was tagged off Cape Cod in September of 2012 and swam over 39,975 miles between when she was tagged and when she went silent.

Fischer named the shark after his mother. Fischer speculated that Mary Lee might be heading toward Georgia or Florida, where she has been every winter for the past five years.

Since Ware created the account in September of 2012, the account has grown beyond his expectations, he said.

"The account has had an amazing response," Ware said. "People have been so kind."

One person who follows the account told Ware she was going through chemotherapy, and the tweets sent out by Mary Lee were a big part of her life.

Ware started the Mary Lee Twitter account in November of 2012 when the shark passed off the coast of Wilmington, North Carolina, where Ware lives and works.

He was fascinated by her travels, Ware added.

"We started tweeting jokes and responding to people and it took off like crazy," Ware said. "Within a couple of days, people were talking about the tweeting shark."

The account really took off in 2015 when Mary Lee made passes off New Jersey and New York, Ware said, where the media picked up on the tweeting shark.

He didn't know the Mary Lee sensation would grow to where it is when he first started it, Ware said.

"When we got to 50 followers, we thought this would be great," he said.

Twitter accounts "run" by animals such as Mary Lee are popular because of the entertainment factor that they bring, said Jenn Mackay, associate professor of journalism at Virginia Tech.

People follow corporations for entertainment factors, too, she added, so this is another way people are receiving entertainment from the accounts they follow.

"It's a type of distraction from the real world," Mackay said.

But for Ware and OCEARCH, Mary Lee is more than a tweeting shark.

When Mary Lee was first tagged in 2012, Ware said there was still the "Jaws" mentality where sharks were something to be feared.

That's different now, though, he said.

"Really, most (sharks) will try to avoid human contact, so that was the biggest change, seeing that shift in the attitude toward sharks," Ware said. "I don’t know if the Twitter account had anything to do with it, but Chris Fischer credits Mary Lee with changing that perception."

And even with Mary Lee going silent, Ware hasn't given up hope.

Katharine, another tweeting shark, pinged Tuesday after not reporting a location since June 25 — eight days since Mary Lee last pinged.

"So for me, that's a hopeful sign that Mary Lee might surface," he said. "It's a remote chance."

Here are a few quick facts about Mary Lee from OCEARCH:

1 / 25
ANNA ZIEMINSKI, AFP/Getty Images
GANSBAAI, SOUTH AFRICA: An undated file photograph of a Great White Shark swimming off Gansbaai, about 180 kms from Cape Town. Following a great white attack on a young surfer last week off Muizenburg, tour operators are accused of making the waters dangerous by 'chumming' where the operators throw a mixture of fish blood and oil into the water to attract the great whites. AFP PHOTO/THEO FERREIRA/SHARKAHOLIC (Photo credit should read ANNA ZIEMINSKI/AFP/Getty Images)