The classic order is a pulled pork sandwich with coleslaw. They also serve pulled chicken, chicken quarters, stew, and all homemade sides. 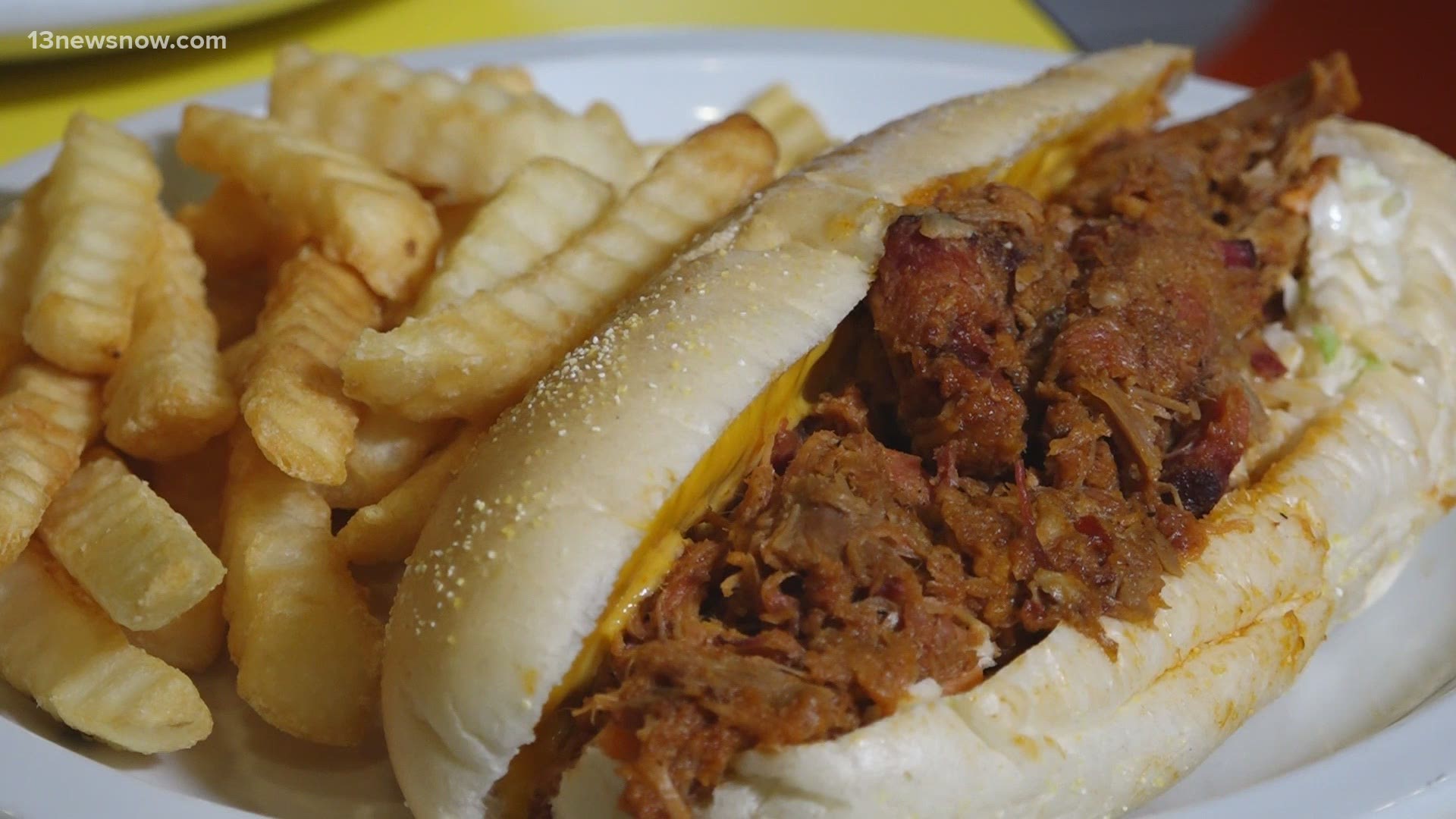 "I remember him calling me in as he sat there with a yellow legal pad and drew what just looked like a square to me, and he was drawing out this building. I guess he could tell I wasn't paying attention, and he pointed his finger at me and told me, this is going to be your future. You need to pay attention to what's going on," laughed Pierce.

Fifty years later, Jay Pierce runs and operates what his parents started. Pierce's Pitt started as a small shack and evolved into a big building with plenty of seating inside and outside. They have hug pits out back with plenty of space to make the good stuff. Everything you see is farm-to-table.

Pierce tells 13News Now that they source all of their vegetables and meat from local farmers in Virginia. Farm-to-table means all of their sides and toppings are fresh. Their meat is also free-range, meaning it has no antibiotics or impurities added. The classic order is a pulled pork sandwich with coleslaw. They also serve pulled chicken, chicken quarters, stew, and all homemade sides. That's not all Pierce said, "Now we do ribs, brisket, burnt ends, the chicken, so the menu just keeps expanding."

It's all delicious and authentic. You can taste the love that goes into every single bite. The desserts are also homemade classics; red velvet cake, coconut custard pie, pecan pie, and banana pudding, to name a few. The banana pudding taste's just like home.

"We're a dying breed; we're not a chain," said Pierce. That's why Pierce takes his job so seriously. He wants to ensure everything's done right. Pierce is no stranger to hard work; even now, you can find him in the kitchen working even on the weekend. "I had an employee say to me the other day; they said, you know, this has been my rock. They said when life throws things at you, death in your family, whatever happens, the trauma in your life, or just the hard times. Because we have such a tight-knit group of employees that have worked together for so long they pick you up, they're there when you need them, so it means coming home to me, it means security, knowing someone's got your back," said Pierce.

Pierce continued to gush over his employees for most of the interview. He said that some employees are in their fortieth year of work for the company. "We sill laugh, and you just treat one another with respect and be proud of what you've achieved. Because I can't do this without them, do we all lean on one another," smiled Pierce. He continued to speak highly of his staff but then hesitated, saying their most significant problem is finding people to come work. "I would hire 14 people if I could find them right now," Pierce sighed.

Pierce's Pitt Bar-B-Que is exceptional, beyond the people and the flavor of the food. Walking in here, you get a serving of history. From the pictures hanging on the wall down to the name of the dishes you order. Each item has a specific name after a person who was instrumental in Pierce's creation and stability. Things like the Super Doc and Bertie Stew, named after the restaurant's creators. Those two passing their love of this place to their son, Jay Pierce.

"This is what I enjoy. This is my family, this coming here, keeping this restaurant going, being able to see those regular customers that have been coming here long enough that they knew my parents. They still call me little boy, and I haven't been a little boy in many, many years," laughed Pierce.

Pierce's love for this Bar-B-Que spot is unmatched. For the last fifty years, this spot has been his life. And to think it all started with a legal pad in his parent's kitchen, with his dad telling him to pay attention, and boy did he.

"I don't think they would've ever had a clue that it would've gotten as large as it has," smiled Pierce.