Massive changes are coming to the sites of the Williamsburg and Monticello shopping centers in Williamsburg. 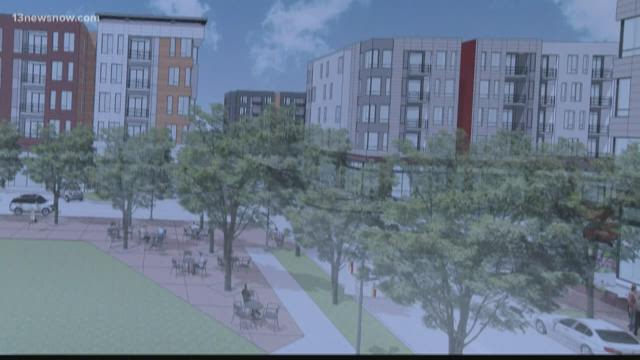 WILLIAMSBURG, Va. (WVEC) -- Two aging shopping centers will get a huge revamp as a part of single project in the city.

Broad Street Realty broke ground Thursday on Midtown Row. The company is performing a major overhaul on the Williamsburg Shopping Center at the corner of Richmond Road and Monticello Avenue and the adjoining Monticello Shopping Center

"I love Williamsburg for what it used to be, but now we need a change to be up to date with all other areas and states," said Lillie Randall-Miller.

During the next two years, crews are refacing, demolishing, and building on the sites of the shopping centers. Restaurants, stores, offices, and around 250 apartments will fill the space.

The city is contributing between $5 million and $6 million for infrastructure improvements.

"Wider sidewalks, dedicated bike paths, there will be a multi-use path that's built that will connect these two shopping centers with Newtown and James City County," Freiling said.

The College of William & Mary and the federal government are putting money towards the multi-use path which should cost about $1 million.

Earth Fare, an organic grocery store, is the first to break ground. The North Carolina-based company wants to work with local vendors and farmers.

"When we say local, we truly mean it. We try to stay within a 150-mile radius of each specific location," said a company spokeswoman.

While there is some excitement over the project, some people are concerned about traffic and the height of buildings that will be part of the development.

"The streetscape redesign where we line up the entrances and exits to the shopping centers will actually facilitate traffic flow," Freiling explained. "These buildings will be set back a little bit. There's a sloping to the ground so that you won't notice the height as much."

There are various phases and opening dates for the project, but Midtown Row is scheduled to be completed by early Summer 2020.