Newport News Shipbuilding will add the island on to the USS John F. Kennedy Wednesday. The island will give the ship the distinctive profile of an aircraft carrier. 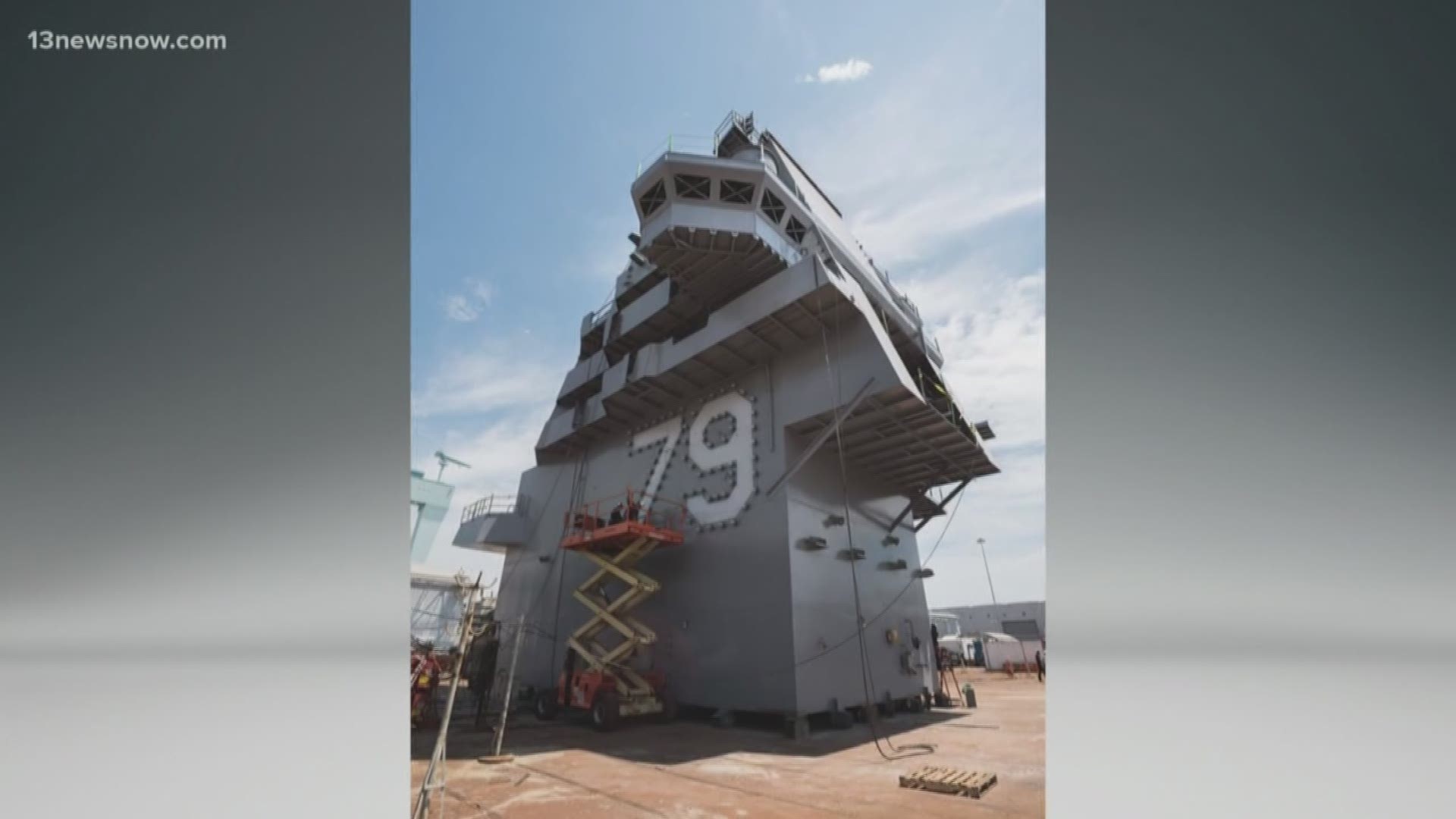 NEWPORT NEWS, Va. — It's a major milestone in the life cycle of the construction of the nation's next aircraft carrier.

On Wednesday, Newport News Shipbuilding will hold the time-honored "island-landing ceremony" for the future warship to be known as USS John F. Kennedy.

When the 555-metric ton island bearing the number "79" is raised and lowered into place on board "Big John's"  flight deck, the ceremony at Newport News Shipbuilding will mark the final super lift in the construction process of the 100,000-ton warship.

The island will give the USS John F. Kennedy the distinctive and unmistakable profile of an aircraft carrier. Visually speaking, it will be the final piece of the puzzle.

The $11.4 billion Kennedy will be the second in the Gerald R. Ford Class of aircraft carriers, replacing the aging Nimitz class.

It will be named for the 35th president, himself a Navy man.

"This is not about politics in any way, shape or form," said Maryellen Baldwin, President and CEO of the Navy League of the United States, Hampton Roads, a nonprofit civilian, educational and advocacy organization that supports America's sea services."It's really honoring the legacy of our former president, and most importantly, doing the right thing for the United States Navy and our national defense."

Baldwin said the ship getting one step closer to reality, with a planned November 2019 christening, and a hoped-for 2020 commissioning, is very exciting.

"For every one of us who are residents here in Hampton Roads, it's a proud feeling when you see a carrier in the Chesapeake Bay," she said. "And to think that we were actually a part of Navy history is very significant."

President Donald Trump today returned to a subject he has spoken about numerous times: his criticism of the Ford Class's electromagnetic aviation launch system.

Speaking aboard USS Wasp during his trip to Japan, the President said that while the new catapults are faster, they are too complicated and too expensive, and he said they were, "the wrong choice."

He said: "I think I'm going to put an order. When we build a new aircraft carrier, we're going to use steam."

The island-landing ceremony is scheduled to begin at 10:30 a.m. Wednesday.