About 26 percent of Navy fighter pilot positions are unfilled, or one in four billets, with that number expected to increase through 2023, according to a Government Accountability Office report. 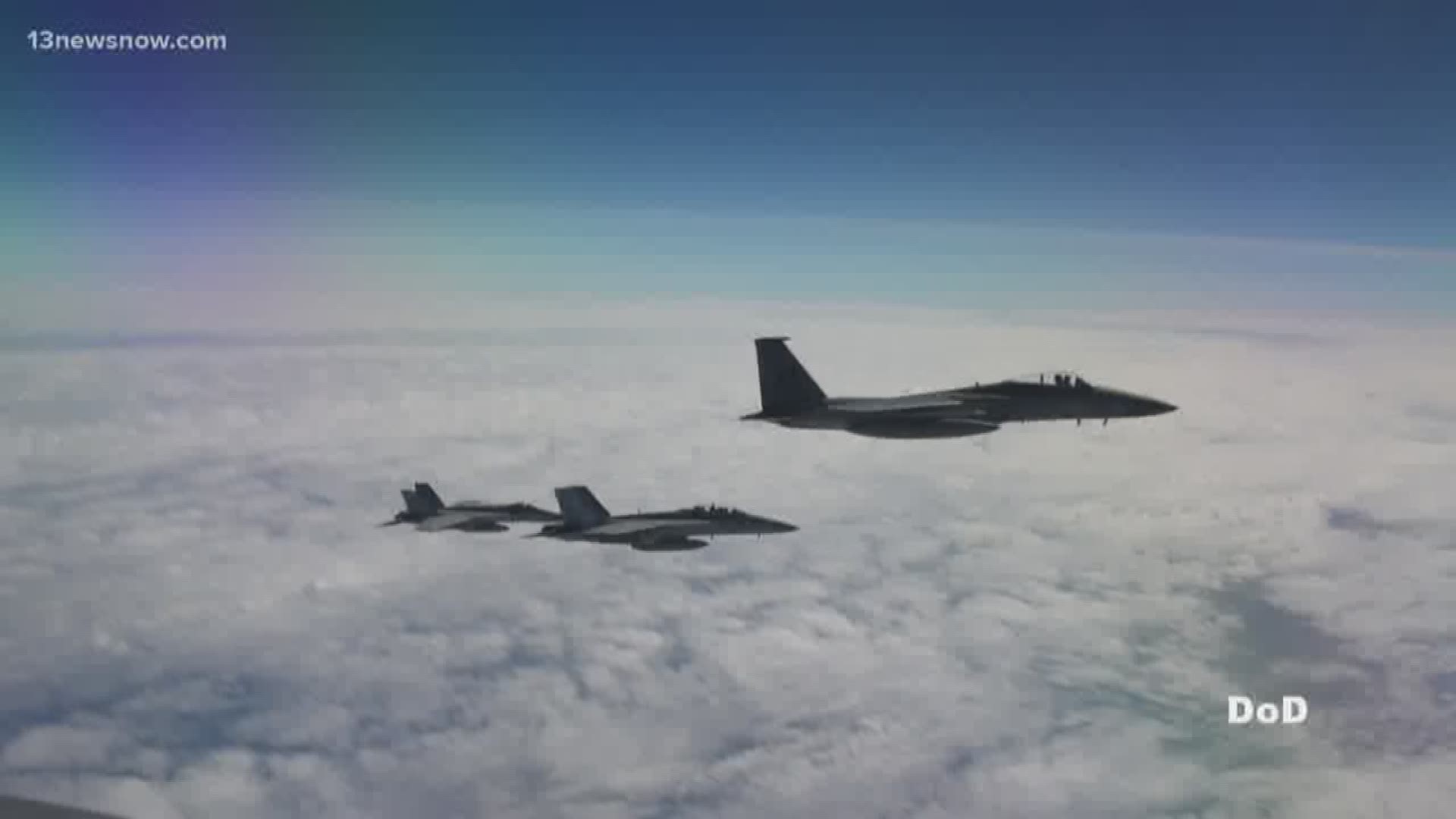 Current and former fighter pilots are raising serious concerns regarding military readiness as a result of an increasing fighter pilot shortage.

Top military officials said the private sector, specifically commercial airlines, is poaching their pilots. Boeing estimates North America will need to hire more than 200,000 pilots over the next twenty years as the number of airline passengers doubles to more than eight billion, according to the International Air Transport Association.

Specifically, within the Navy, the influx of airline hiring is exacerbating a staffing shortage within its fighter pilot community, which makes up about 33 percent of its pilot force.

"I can count on my fingers five guys, they decided to get out early," said former VFA-106 Flight Instructor Matt Walker. “It gets back to, they’ve been a fighter pilot, they’ve done that job and the ability to transition smartly, [this] is the time to do it.”

Navy Strike fighter pilots fly F/A-18’s, a fight and attack aircraft that is primarily used as a fighter escort and for fleet air defense. Their positions are critical to achieving and maintaining air dominance during combat operations.

About 26 percent of Navy fighter pilot first tour junior officer positions are unfilled, or one in four billets, with that number expected to increase through 2023, according to an April 2018 Government Accountability Office report.

“I’ve watched a lot of good men and good women leave this job,” said Lieutenant Commander Tony Kopp, a Training Officer of VFA-131. “The fact of the matter is it’s a tough job. There’s a lot of stresses with this job. There’s time away from family, there’s long hours away from work, there’s inherent danger among the things we do on a daily basis.”

The Navy said across all fighter pilot ranks, there is a nine percent shortfall.

The GAO found the staffing shortage is resulting in longer deployments and an increased workload, which is ultimately worsening the situation.

The Navy is facing a growing shortage within the VFA community, as an increasing number of junior officers are declining the department head promotion.

The option to take the department head promotion signals whether Navy fighter pilots are leaving the military the first chance they get, as it comes when they complete their first 10-year obligation to the Navy.

“We do a little bit more with less,” said Lieutenant Julius Bratton, an Instructor Pilot at VFA-106. “We run the squadron with fewer J.O.’s [junior officers] and the same amount of jobs so it’s inevitable that we’re going to work hard and feel overworked.”

Credit: 13News Now
Lt. Julius Bratton says he is still deciding whether or not he wants to stay in the Navy as a fighter pilot.

Bratton said he is unsure if he wants to accept the department head promotion or leave the force altogether.

When requested by 13News Now, the Navy did not provide the exact numbers of pilots declining the department head promotion, including FY 2020 numbers.

Overall, top military officials say the shortage is causing the Navy to miss its staffing requirements. For an organization that only promotes from within, it means not being able to be as selective when choosing the leaders who move forward in the pipeline.

“We want to have enough Department Heads to fill our squadrons and at the same time we would like to have enough selectivity to go at 70 percent, in other words, be able to pick and choose the very best of that group,” said Kelley.

Admiral Kelley said deploying forces are 100 percent staffed and therefore, readiness is not an issue. April and June 2018 GAO reports found the Navy makes up for the staffing gaps by having senior pilots fill junior positions and by pulling in pilots from other squadrons.

“The manning on deployment, we’re meeting all those manning requirements,” said Kelley. “The issue would be if there are undermanned situations, it’s when they're in the training back home, home base, so in maintenance and basic training is where we would see any of the shortfalls happen.”

Ultimately, the staffing shortage is rippling through non-deploying squadrons. Those squadrons are facing aging aircraft, a lack of parts and fewer people. Military officials acknowledge it results in less flying time and less training.

Austin Hulbert left VFA-106 in December 2015 and said these factors are taking their toll on the force.

“You see that with people getting out,” said Hulbert. “They go, ‘You know this isn’t worth it. Why would I fly aircraft that are breaking because we don’t have enough parts for them or because they’re being overflown past their service life when I can go fly for an airline and make a lot more money and have none of the ground job responsibilities?’”

Kelley made it clear that he does not feel the shortage impacts military readiness. 13News Now asked, “And you guys have never deployed an air wing that was not ready?” To which Kelley said:

“Oh, I wouldn’t say that. I would say that we man, train and equip to the very best that we can to meet requirements. Now if you said, ‘Is there anybody that’s deployed that we felt was somewhat challenged for one reason or the other… they may have gotten personnel later in the training cycle so that they weren’t able to get the qualifications level that they wanted to have for deployment?’ Yeah, absolutely. Are we looking at operational risk by doing it? No.”

When pressed to provide the number of times an air wing deployed below readiness standards over the last five years, the Navy was unwilling to share that information.

Kelley said the Navy implemented changes aimed at getting pilots to stay - like an increase in flight pay, changes in the bonus structure and creating a flight instructor program.

However, according to Kelley and several GAO reports, it will take years to see results.

Hulbert, the former Fighter Pilot, warns the changes may not be enough and, in the meantime, the staffing shortfall is chipping away at the force’s morale.

“That’s the worse thing that could happen is you completely destroy the soul and the spirit that makes people want to sign up and join the military,” said Hulbert.

Lieutenant Commander Tony Kopp, Training Officer of VFA-131 accepted the department promotion last year and described why he decided to stay in the Navy. 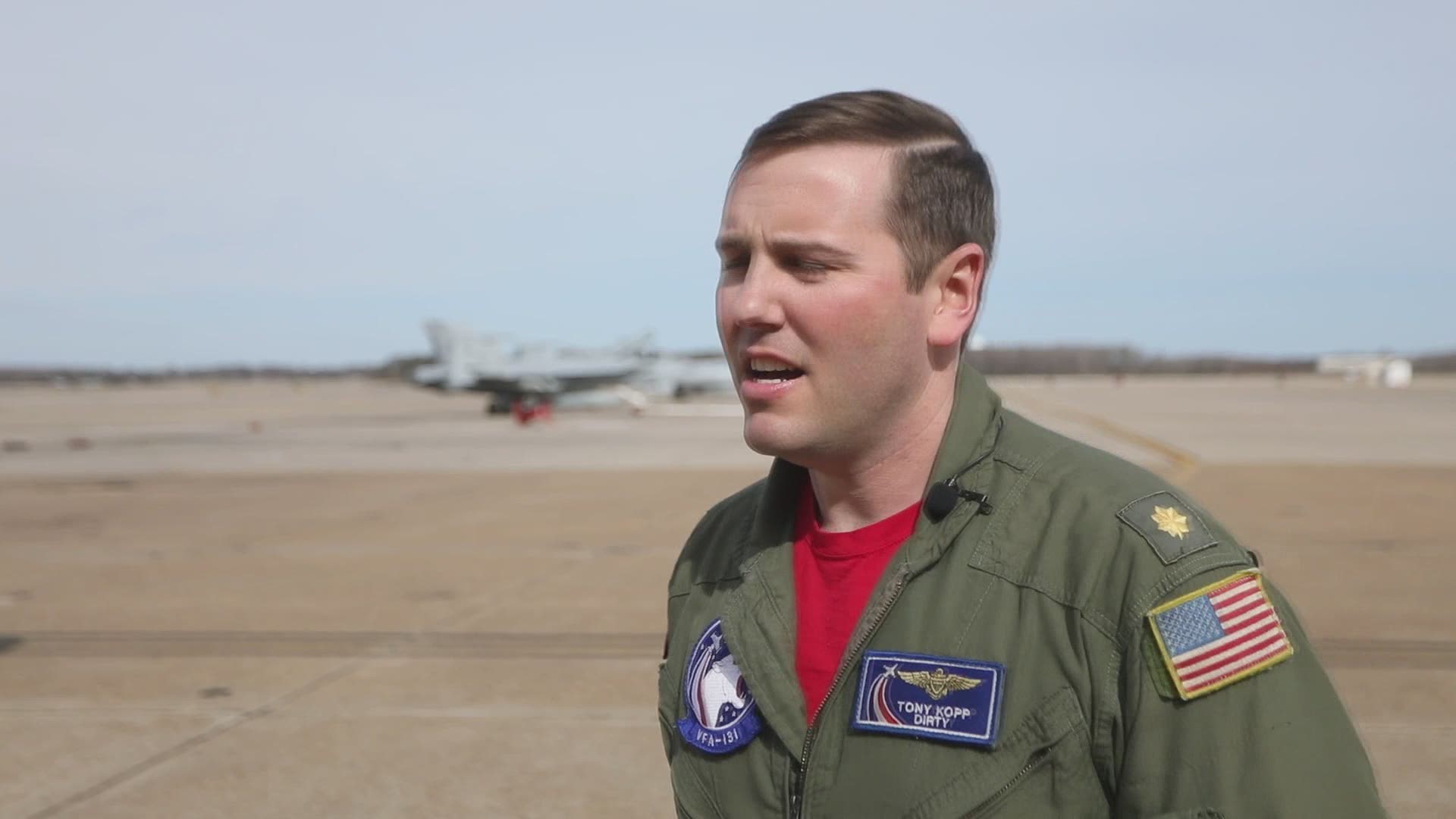 While we don’t know all the reasons some aviators choose to leave the service early, many have said they did so because of insufficient flying hours and a broadening pay gap as compared to private industry.  These are two areas where we have focused great efforts on correcting, and today we are starting to see a positive trend developing.  The number of “up aircraft” is on the rise leading to an increase in flight hours and with our new bonuses, the pay gap is rapidly decreasing.  Some specific initiatives to improve since 2017 include:

The Professional Flight Instructor (PFI) alternate career path was officially launched in November 2018 with a selection of the first 25 pilots/NFOs for the program.  PFI is a career path initiative that allows selects to serve continuously as flight instructors beyond Department Head.  This career path offers greater assignment stability for selected officers and their families and provides rewarding experiences shaping the development of our newest Aviators.  The PFI program is intended to improve retention by responding to calls for greater career choice/flexibility, while also improving instructor manning.

These efforts, coupled with a range of Navy-wide initiatives (e.g., Performance Evaluation Transformation, Marketplace Detailing, Targeted Reentry Programs, renewed emphasis on leader development through education), are beginning to have positive effects on retention by addressing the career choice/flexibility and quality of service concerns leading many to leave the Navy.