The military says some active duty service members stormed the Capitol. So what are they going to do about it?

The Secretary of Defense has ordered a “stand-down” so commanders can discuss extremism in the ranks with their personnel. 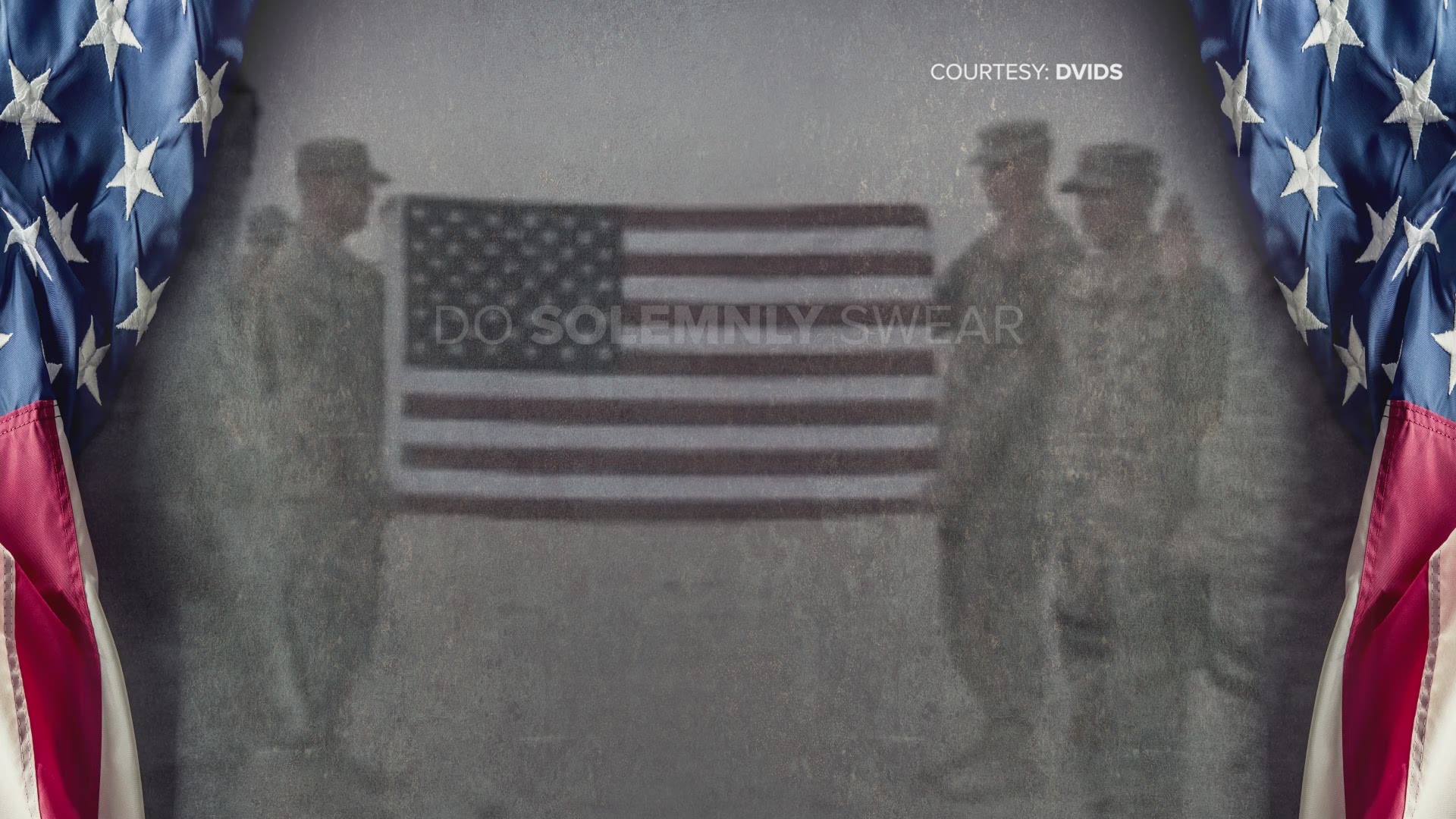 WASHINGTON — Every single service member takes an oath to support and defend the Constitution of the United States when entering the military. But, the Pentagon announced that some of the extremists who stormed the U.S. Capitol, the heart of our democracy, on Jan. 6., were active-duty service members. DOD told WUSA9 they aren't aware of any active-duty troops being indicted yet.

The newly appointed Secretary of Defense has issued a "stand-down" order directing commanding officers to hold discussions about extremism in the ranks.

We asked retired Major Mike Lyons, a military analyst and a United States Military Academy West Point graduate, how this could happen.

“It doesn't happen overnight; it happens likely over time,” Lyons said. “There is a story behind it. It's likely an individual story for what these people did.”

What these active-duty military members allegedly did wasn't just betray an oath, but break a Department of Defense rule. The rule states:

“Military personnel must not actively advocate supremacist, extremist, or criminal gang doctrine, ideology, or causes, including those that advance, encourage, or advocate illegal discrimination based on race, creed, color, sex, religion, ethnicity, or national origin or those that advance, encourage, or advocate the use of force, violence, or criminal activity or otherwise advance efforts to deprive individuals of their civil rights.”

They also cannot participate in demonstrations where "violence is likely to result." If they do, they'll face punishment from commanders.

“You go to work every day in the military, good day or bad day, you're doing something important and for whatever reason individuals that decided to do that lost their way about it,” Lyons said. “And it's possible in our world given all the forces that act on people and social media points and what's going on right now.”

“How does the leadership not pick up on these people?” Lyons asked. “There's red flags that usually come about and the leadership has got to be more attune to them.”

That's where the retired major believes the "stand-down" will come into play. We've learned over the next 60 days, leaders will choose one day to drop everything and talk about this issue with those in their commands.

The memo explains the discussions "should include the importance of our oath of office; a description of impermissible behaviors; and procedures for reporting suspected, or actual, extremist behaviors."

“It allows the military to catch its breath,” Lyons said. “Sometimes what's called the OPTEMPO, and that's the pace at which the military runs, gets so far out in front that commanders and leaders don't recognize that they're making mistakes.”

Veteran and Maryland Congressman Anthony Brown hopes part of the defense bill or NDAA, Congress passed in January, will also help. It requires the military to ask service members about their experiences with racism, extremism and anti-Semitism in workplace surveys.

“What we want to do is really get our arms around the problem in the military, how prevalent is these extreme ideologies,” Brown said.

Both Brown and Lyons think these efforts need to start early.

Secretary Austin wrote this is just the first initiative. He closed his memo writing:

"We owe it to the oath we each took and the trust the American people have in our institution."

We asked Lyons what the consequences are if the military doesn’t root out extremism in the ranks.

“People are going to lose faith in it,” he responded. “It has one mission – fight and win the nation's wars – and these are distractions that will get in the way of doing that."

Commanders have the ability to tailor these discussions to what's going on in their specific units.

In case you're curious about the @USNavy's diversity and inclusion efforts -- here's our story on Task Force One Navy: https://t.co/K2rR6mta5K @wusa9

When WUSA9 asked what the stand-down will look like, a U.S. Marines spokesman said: “There are not many details to share at this stage. We are aware of the Secretary’s order for the stand down. Guidance to the force, including expectations and training materials, is still under development and more information will be available at a later time.”

“I believe you probably might want to query DoD, to learn if they will be publishing guidance, and the timeline for that,” a U.S. Army spokesman responded.

“We are currently working on a plan based on OSD guidance,” U.S. Air Force spokesperson Lt. Col. Malinda Singleton stated. “Once we have the details, I'll reach back out to you with the additional information.”

WUSA9 also asked each of the branches what they plan to do about service members who might have participated in the riots.

A U.S. Army spokesman sent us this response:

“No Active-duty Soldiers have been charged or arrested for participation in the Jan. 6 events at the U.S. Capitol.

The Army is committed to working closely with the FBI as they identify people who participated in the Jan. 6 events at the U.S. Capitol to determine if the individuals have any connection to the Army.

Extremist ideologies and activities directly oppose Army values. The Army takes all allegations of Soldier or Army civilian involvement in extremist groups seriously and will address this issue in accordance with Army regulations and the Uniform Code of Military Justice, based on the facts of each individual case."

A U.S. Marines Spokesman sent us this response:

“No, there have been no active-duty Marines arrested for participation in the events at the Capitol.

Marines may participate in peaceful protests or rallies so long as they are not in uniform or showing perceived DOD or Marine Corps affiliation to the political activity or event. However, trespassing, damaging property or destructive behavior is never allowed. Marines found guilty of engaging in these behaviors will be held accountable, as appropriate. All Marines must be steadfast in our commitment to defend the Constitution and our Nation’s democratic principles.

Commanders have the authority to employ the full range of administrative and disciplinary actions, including administrative separation or appropriate criminal action, against military personnel who engage in prohibited activities. Suspected criminal activities perpetrated by DoD personnel are investigated by DoD law enforcement components. These components conduct joint investigations with federal, state, and local law enforcement agencies as appropriate.

I’d like to reiterate that at this point there have been zero arrests for Marines participating in the events at the Capitol, so any discussions on specific disciplinary measures are premature or speculative.”

A U.S. Air Force Spokeswoman sent us this response:

“To date, there have been no active duty Air Force members arrested for participation in the January 6th riots at the Capitol,” USAF Lt. Col Singleton said.

“The FBI has primary jurisdiction over all investigations into the criminal activity occurring on Capitol Hill. While the Department of the Air Force is providing full support to all inquiries coming from the FBI to help further their investigations, it would be inappropriate for us to comment on them. As such, any inquiries into those investigations, including number of cases, should be directed to the FBI National Press Office.”

A U.S. Navy Spokesperson sent us this response:

“The FBI has primary jurisdiction over all investigations into the criminal activity occurring on Capitol Hill. As such, any inquiries into those investigations, including number of cases, should be directed to the FBI National Press Office.”

The FBI did not have a comment for our story.

We are still waiting to hear back from the U.S. Department of Justice.