“My mom initially thought that my dad was developing Alzheimer's," says the daughter of a QAnon follower. 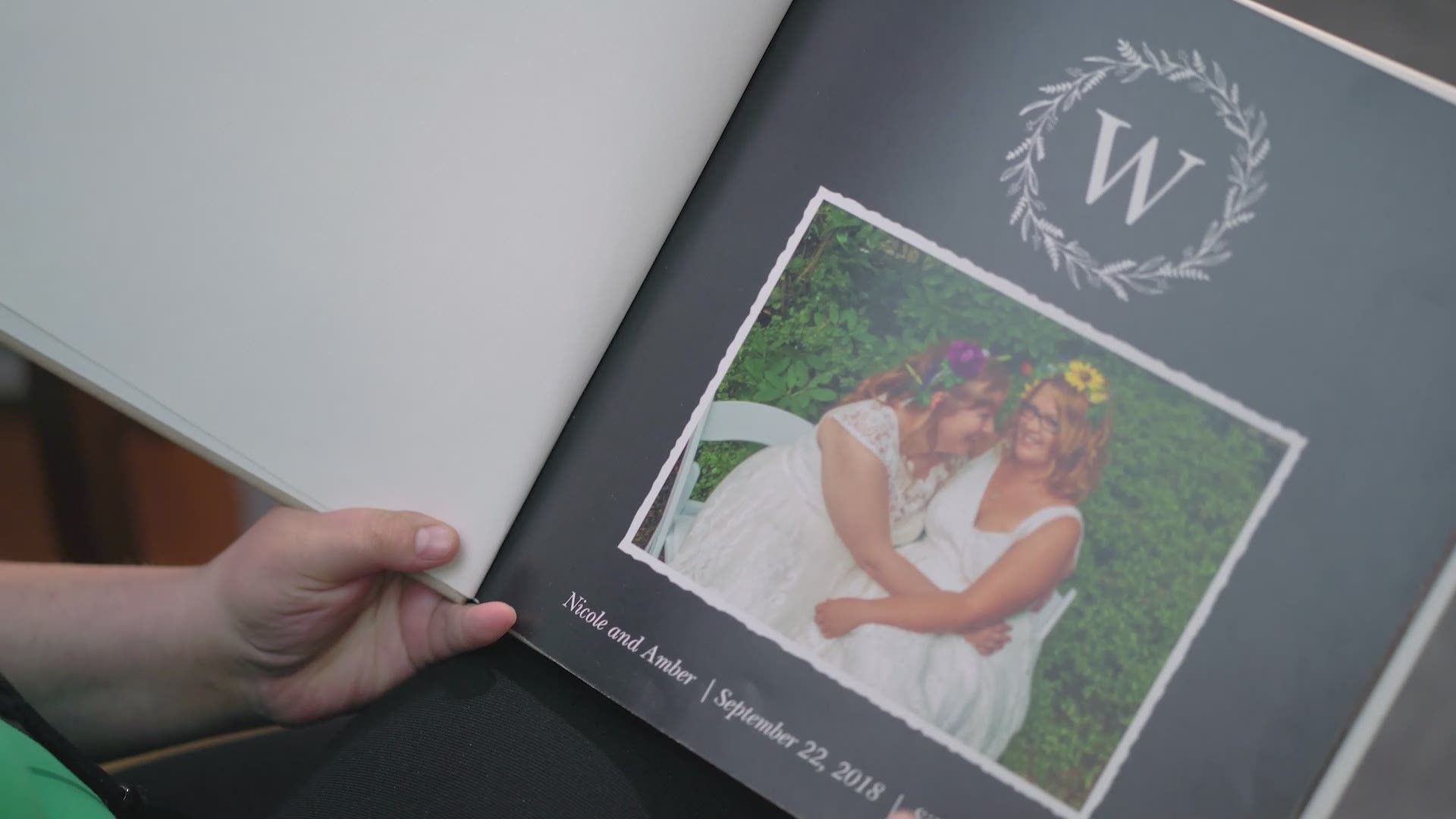 WASHINGTON — On December 4, 2016, Edgar Welch walked into a northwest D.C. pizzeria and opened fire with an AR-15.

Welch had driven more than 300 miles from Salisbury, North Carolina – a town of 33,000 people an hour northeast of Charlotte – fueled by the belief that he was about to liberate a child sex ring run by prominent Democrats out of the basement of northwest D.C.'s Comet Ping Pong pizzeria.

In a video recorded in his car on the way to D.C., Welch told his daughters he "couldn't let them grow up in a world so corrupted by evil." He said he was going to stand up for children like them.

By the time Welch exited the restaurant to turn himself into police, he had fired multiple shots, thankfully hitting no one, but had found no shadowy cabal of Satanic politicians and no children – except the ones who were there to play games and get pizza with their families. Comet Ping Pong, it would turn out, doesn't even have a basement.

Welch was a militant believer in the conspiracy known as "Pizzagate" – a bizarre and baseless theory pushed by prominent right-wing activists and websites that took root on places like Reddit and Voat during the 2016 presidential election. Rather than ending with Welch's ill-fated trip to Comet Ping Pong, however, "Pizzagate" eventually morphed into an even more insidious belief system now known as "QAnon" – a web of discredited conspiracy theories that helped fuel the January 6 assault on the U.S. Capitol building.

Credit: File Photo
Jacob Chansley, aka the "QAnon Shaman," shown here in an undated photo. Chansley was among hundreds who entered the Capitol on January 6, 2021.

QAnon, broadly speaking, is a set of interlinking, often amorphous, beliefs that hold that a Satanic cabal of cannibalistic pedophiles runs a global sex-trafficking ring – and that former President Donald Trump was leading an intricate plan to stop them. The conspiracy theory is named after an anonymous 4chan user named "Q" who claimed to be a high-ranking government official and who would post cryptic messages purporting to provide QAnon believers with classified information.

While it is unclear how many people follow QAnon nationwide, the toll QAnon has taken on families in the DMV has begun to come into focus since the Capitol riot.

Amber Winters sits inside her Maryland home, looking through old photos of her lifelong best friend. She hasn't spoken to him since he cut off their relationship when she began questioning his growing interest in QAnon.

Credit: Haleigh Purvis
Amber Winters looks over photos of the life-long friend she says she lost to the QAnon conspiracy theory.

The change, she says, began in 2017 shortly after Trump's election.

“After Trump got elected, things started getting different. He got more argumentative,” Winters said. “You know, he called to argue about politics more often. He got more personal when I didn't agree with him.”

Winters said she distinctly remembers a conversation in which her best friend attempted to convince her that then-President Barack Obama was “the Antichrist."

“He told me that most of the people in power in the government are part of an elite pedophile ring,” Winters said. “And then I looked up what QAnon was, because I wasn't super familiar. Some of their beliefs and some of the things that he had been saying to me aligned with the Q beliefs. And that's where it all kind of clicked with me.”

In Virginia, a Prince William County woman says she came to a similar realization about her father. She asked not to be identified because her family still lives in the area.

“It’s those QAnon catchphrases that people say,” the woman told WUSA9, adding that growing up in Prince William County her father had stressed the importance of respecting all political viewpoints.

Then she says, he started following QAnon and pushing its conspiracy theories.

“My mom initially thought that my dad was developing Alzheimer's,” she said. “That's how out-of-character this behavior was. Trying to explain to somebody that I don't think that the Clintons are running a child sex ring? Like... I don’t know how to prove that. The dad that I grew up with was not that person. I don't know who that was.”

'The Storm is Here'

On January 6, thousands of people flocked to Washington, D.C., to attend then-President Trump's "Stop the Steal" rally. Many of them, wearing shirts and carrying flags emblazoned with a large "Q," believed they were dutifully answering the call of a president who had told them for months that the election had been stolen.

For some, like Air Force veteran Ashli Babbitt, it wasn't just that Trump had promised a "wild" day – it was the culmination of years of promises from Q himself.

"Nothing will stop us," Babbitt posted on Twitter on January 5. "They can try and try and try but the storm is here."

Babbitt's family said the 35-year-old California resident had become "fanatical" about her support for Trump and her belief in the QAnon conspiracy theory. On social media, her posts were filled with references to Trump and his "Make American Great Again" (MAGA) slogan, rants about the border wall and attacks on the Democratic Party.

While in the Air Force, Babbitt had served deployments in Afghanistan, and transitioned to the National Guard in Maryland upon her return to the states. Her uncle, Anthony Mazziott Jr., said Babbitt came to D.C. on January 6 out of a sense of duty for her country, thinking she could "influence whatever was happening in Washington that day."

What happened in Washington that day wound up being a violent assault on the U.S. Capitol building by thousands of pro-Trump rioters – among them, Babbitt. Video captured during the riot shows Babbitt among the mob trying to break into the Speaker's Lobby outside the House Chamber.

After other rioters broke out the glass in windows to the lobby, video shows Babbitt attempting to climb through to where several Capitol Police officers were barricaded. As she did so, one of the officers fired a single shot – striking her in the shoulder. She was pronounced dead a short time later.

Back in Prince William County, the daughter who's become estranged from her father isn't alone in feeling lost.

On Reddit, a support group called “QAnonCasualties” has grown to more than 154,000 members nationwide.

“I think the people who were drawn into QAnon were suffering in some capacity,” said Mia Bloom, co-author of the book Pastels and Pedophiles: Inside the Mind of QAnon. “And I think with the pandemic, many people have been suffering.”

Credit: Mia Bloom
A new book titled "Pastels and Pedophiles: Inside the Mind of QAnon" examines how families should react to a Q believer.

“In many ways, you know, for the people we want to try to get out back into the light, we have to have great empathy," Bloom said.

Bloom has some suggestions for how to approach friends and family members who may have become infatuated with QAnon. Don’t ostracize them, Bloom says – instead, try to hear them out. When opportunities arise, gently point out inconsistencies in what QAnon says is true and what actually happened.

For example, many QAnon communities were convinced a large group of high-profile figures would be arrested for child abuse during President Joe Biden’s inauguration on January 20, and then, when that failed to materialize, that Trump would become president again on March 4. Needless to say, neither of those things happened.

“I think the idea is that we don't want people feeling completely isolated, that they're abandoned, you know, that their families have abandoned them and the only thing they have left in their life is Q,” Bloom said.

Part of the reason the woman from Prince William County did not want to be identified is because she hasn’t given up on her dad and bringing him back into to the family fold – even though, she says, her brothers have already written him off.

“A lot of people are going through this separation process with their loved ones,” she said, “and that's really crummy.”

Amber Winters has given up any hope of reconciliation after her best friend ended their life-long relationship with a text message. She still keeps it on her phone.

“I can't stand what you hope to do to this country. It's destroyed now, and I blame you for your part in it,” the message read.

Credit: Haleigh Purvis
Amber Winters spoke to WUSA9 about the childhood friend she lost to the QAnon conspiracy theory.

He said he never wanted to speak to Winters again. Despite that, she says she will always worry about him and the impact QAnon has on his life.

In May, QAnon followers are hosting a three-day conference in Dallas. The “For God & Country Patriot Roundup” is a follow-up to a similar conference held last year in Atlanta.