The Tribe were without quarterback Hollis Mathis & running back Malichi Imoh. Both were nursing injuries. 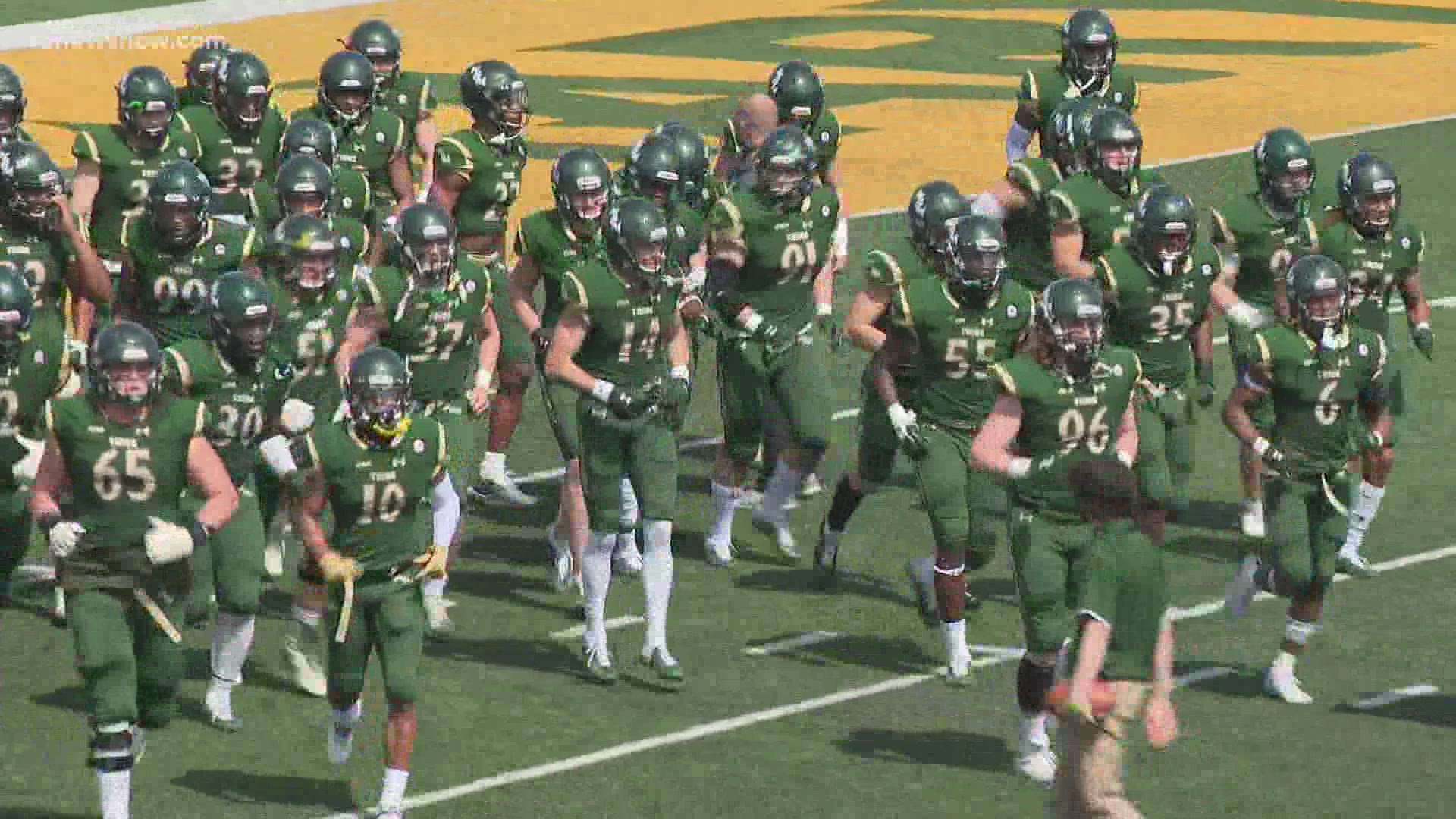 WILLIAMSBURG, Va. — To compete against a team like James Madison, which is ranked No. 1 in the nation for a reason, William & Mary at least needed to be at full strength. The Tribe wasn't even close, and neither was the final score.

Playing their first game in three weeks, the Dukes showed no signs of rust in a 38-10 win Saturday at Zable Stadium. Mixing the pass and run at a no-huddle pace, Madison scored touchdowns on its first four possessions. William & Mary had no counter punch.

Offensively, W&M (1-2, 1-2) was missing its two biggest stars from last week's 31-10 win over Elon: Quarterback Hollis Mathis, who had 251 total yards, and running back Malachi Imoh, who rushed for 137 yards and three touchdowns.

Mathis dressed for the game and went through warm-ups. Imoh was on the sideline in his game jersey and shorts.

"With Hollis, it was touch and go," W&M coach Mike London said. "He was unable to throw the ball accurately or with any velocity today, and we just said it's not worth it. I love the young man. He wanted to play, but we're not going to put him in that situation.

"Malachi is a guy who can run like a thoroughbred. And when you're lower-body extremities are hampering you (from) being able to be as fast and explosive as you need to be, it impacts the way you run. We didn't want to put a player out there and make his situation worse."

Their absence had an obvious impact on the Tribe's production.

"Two explosive guys who were basically 90 percent of our offense last week," London said. "We didn't have them today."

The Tribe also was without running backs Owen Wright and Donavyn Lester and wide receivers Kane Everson and Zach Burdick for the second consecutive game.

Quarterback Ted Hefter, fifth-year senior and team captain, made his first start since the 2018 season. He got off to a nice start with a 28-yard completion on W&M's first play from scrimmage. He finished 13-of-20 for 128 yards with a touchdown and an interception.

Minus Imoh, Wright, and Lester, the Tribe rushed for 59 yards on 27 attempts. But W&M's biggest issue was on the defensive side, where it was missing starters Trey Watkins (linebacker) and Bronson Yoder (safety). The Dukes had 239 yards and 28 points after their first four possessions.

The Dukes' yardage was nearly split down the middle — 240 rushing, 220 passing. With top back Percy Agyei-Obese out, Kaelon Black filled in with 141 yards and a touchdown.

Quarterback Cole Johnson, who briefly lost his job but got another chance with Gage Moloney unavailable, completed 16-of-22 passes for 220 yards.

"Their strength is in their run game," London said. "That's what they do — they wear you out. And when you bring an extra defender down, they throw the slant pattern right behind you. They did a great job executing."

On their first possession, the Dukes covered 75 yards in 13 plays. Johnson's 6-yard touchdown pass to Clayton Cheatham gave Madison a 7-0 lead with 7:33 remaining in the first quarter.

After the Tribe came up empty in the red zone, JMU struck again. Jawon Hamilton's 5-yard touchdown run made it 14-0 with 2:58 left in the first quarter.

It got worse from there. Madison safety Que Reed intercepted a Hefter pass to set up the Dukes' offense at the Tribe 11-yard line. But on third-and-six, linebacker Tyler Crist batted down a pass to seemingly set up a field goal attempt.

Instead, the Duke pulled off a perfect fake. Holder Alex Miller scored on a 7-yard touchdown run to make it 21-0 with 1:20 left in the first.

"Our alignment wasn't the way it needed to be, and they executed and got the touchdown," London said. "That was a big swing right there."