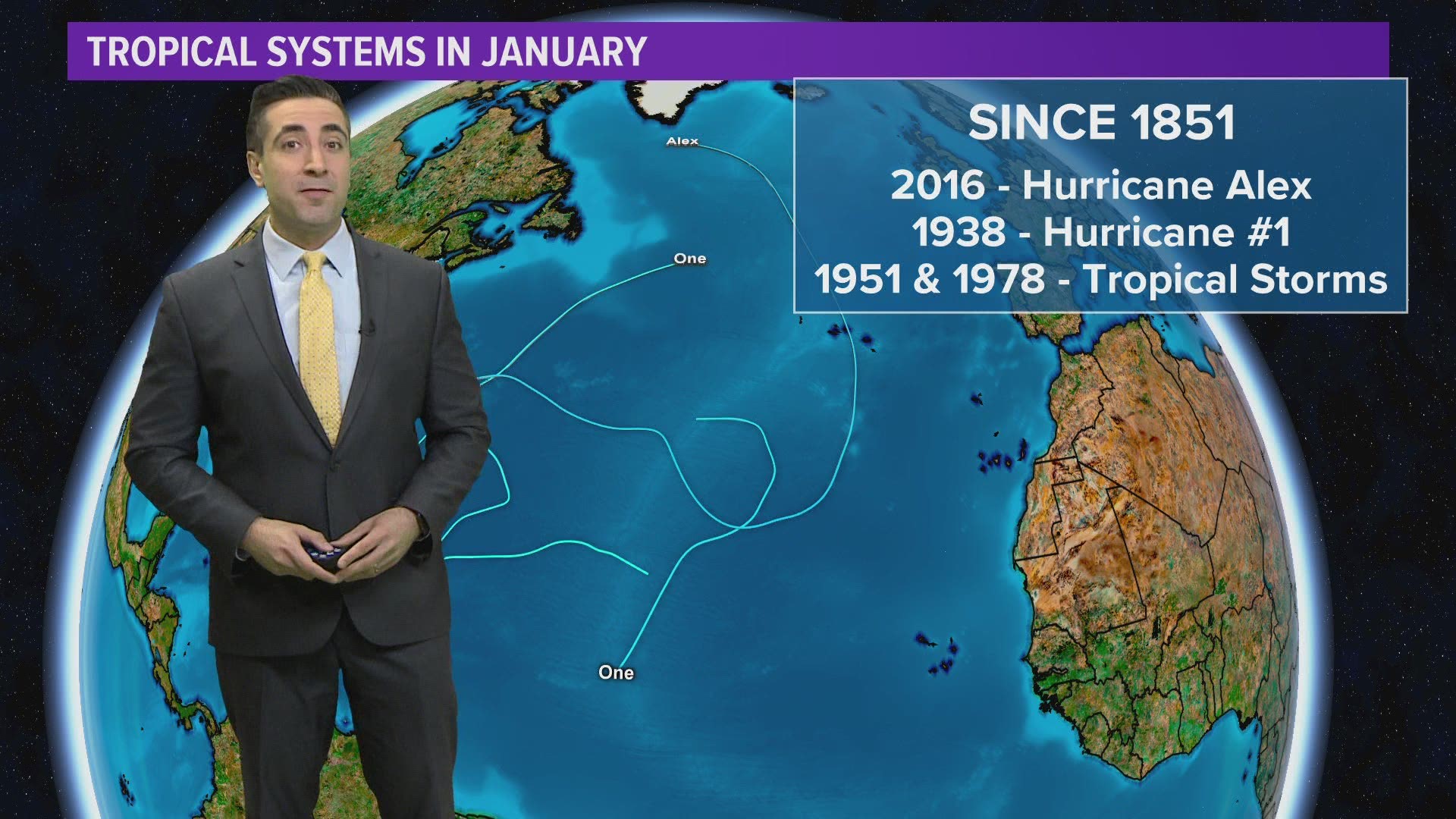 NORFOLK, Va. — We know it as hurricane season and it runs from June 1 through November 30. But Mother Nature doesn’t really follow a calendar and as a result, when the conditions are right we can have tropical storms and hurricanes outside of the "normal" season for them.

Certainly, the whole reason why there is a declared hurricane season is that 97% of all named storms occur during those months. This happens because the atmospheric and ocean conditions are the most ideal. Plenty of warm ocean water (80°F or warmer), moist air, seeds of energy coming off the African coast and favorable upper-level winds. But sometimes these conditions will persist long after the season has ended or develop well before the season begins.

Records of tropical systems go all the back to 1851, so which month of the off-season do you think is the quietest in terms of tropical activity? January, February, March, April, May, or December?

Even though it may be the middle of winter at this point, we’ve seen named tropical systems in the Atlantic during the month of January. Most recently was in 2016 with the formation of Alex, which grew into a category 1 storm, becoming the strongest hurricane ever recorded in the month of January.

Now on to February, really the heart of deep cold over much of the Northern Hemisphere at this point in our annual cycle of seasons. Surely this month is pretty quiet... and yes, it is, but still over that 170 years of records some certainly formed in February, right? You betcha!

No hurricanes have ever formed in February, however, there has been 1 tropical storm in 1952 and this one tracked right along the US southeast coastline. They called this one the Groundhog Day Storm! One other was a tropical depression from over 100 years ago in 1911!

Now of those six possible answers to the question I posed earlier, March is correct and is the quietest month of the year in terms of tropical activity in the Atlantic. Only one storm since 1851 has been recorded during the month but that storm was a doozy: a category 2 hurricane in the year 1908 that became known as the strongest off-season storm on record.

As we’re heading into spring, ocean temperatures are warming, the Northern Hemisphere is now past the Vernal Equinox, days are longer, more heat is available in the oceans as energy for potential storms. April as you’d expect starts to see a slight uptick in activity despite it being technically off-season.

There have been seven recorded storms in April since 1851. A few of them have occurred rather recently. In April of 2017, we had our first named storm of the year, Arlene, which maxed out as a weak tropical storm. In 2003 we saw Ana develop and also become a tropical storm. No hurricanes have been recorded in April, though.

The month before the season officially starts sees a huge jump in activity: 52 storms have been recorded in May! Just last year our first named storm of the year, Andrea, developed in May. In 2018 May brought us Alberto and in 2015 Ana. Out of 52 storms, only six went on to become hurricanes and none of those happened in this century.

Now let’s head to the other side of the season, December, coming down off of months of higher sun angles cooking up the Atlantic waters, activity drops off markedly, only 17 storms developed in December since records began in 1851. Most recently was 2013, an unnamed subtropical storm. Five storms became hurricanes.

Here are some really interesting facts from the official Atlantic hurricane database. The first storm to occur out of season was in 1865. The year with the most offseason storms was 1887 with a total of five. In seven seasons there were both storms before and after the season.

Out of all of those storms that occurred out of season, how many made landfall? Now I will say that most do NOT make landfall, good news. Most recently was Tropical Storm Beryl, which came ashore in 2012 along the Florida coast claiming the lives of three people.

RELATED: TIM Talk: Lightning and the distance of a storm