According to Governor Northam, store mottos should from now on be "no shirt, no shoes, no mask, no service." 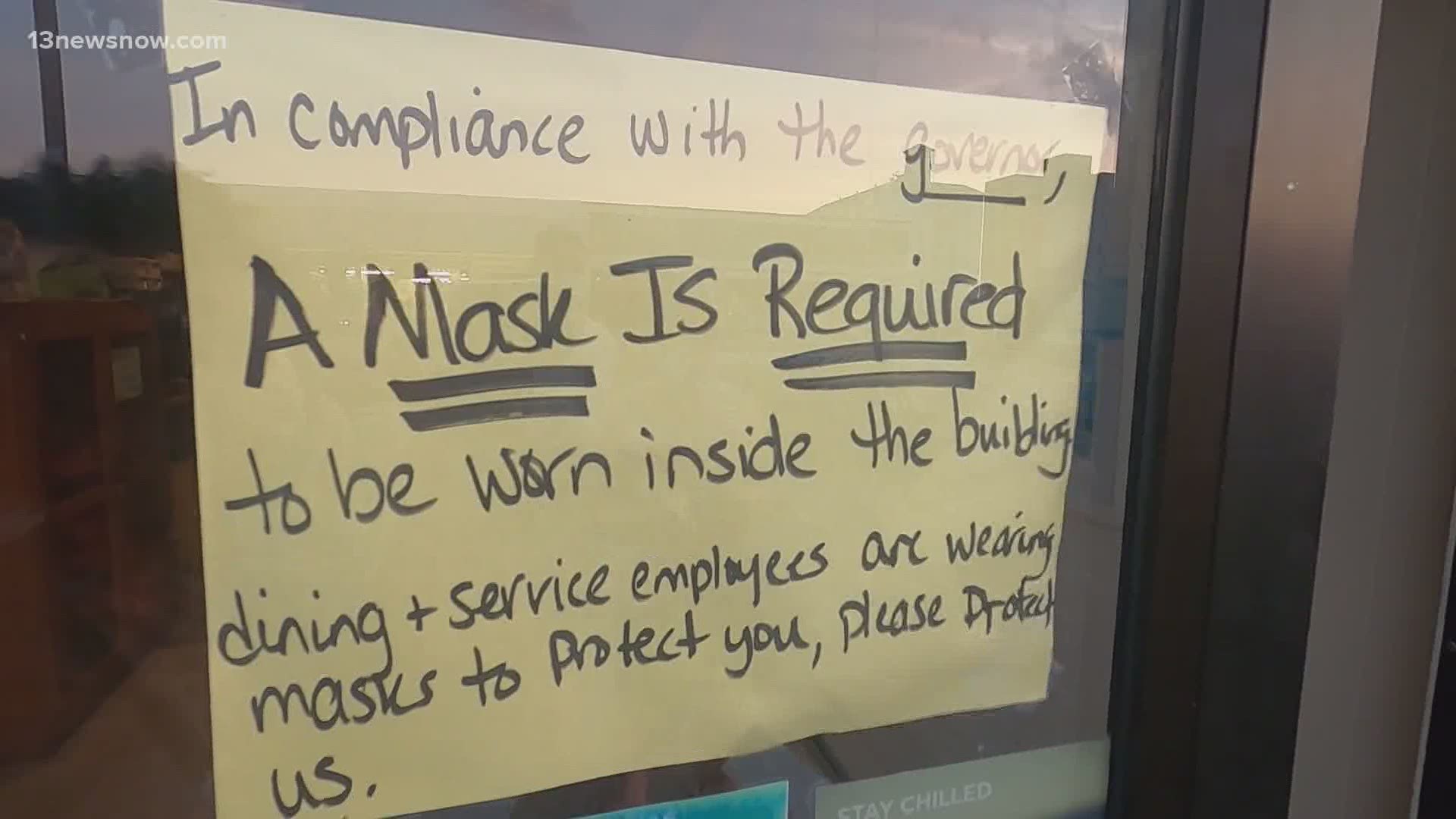 VIRGINIA BEACH, Va. — Virginia is continuing in Phase 3 but during a Tuesday briefing, Governor Ralph Northam said they will bring down the hammer when it comes to enforcing COVID-19 restrictions.

He is specifically focused on Hampton Roads.

Northam said The Virginia Department of Health is deploying 100 health officials out to ramp up enforcement.

"It's an inconvenience, it's not a problem,” said Ocean Eddie’s Seafood Restaurant manager Debbie Hague.

Hague said after the Governor’s mask mandate began, they tried charging a dollar for masks if a customer didn’t have one. Still, people complained. She said she is done dancing around that rule.

"We are going to have a sign out there,” Hague said. “If you want to come to our restaurant, you will need a mask on."

According to Northam, store mottos should from now on be "no shirt, no shoes, no mask, no service." He's directing health officials to heavily enforce business restrictions after a spike in Hampton Roads cases.

"We all need to do our part to really help slow the spread,” said Norfolk Environmental Health Director Norm Grefe.

Grefe is also an interim environmental manager for the Virginia Beach Health Department. He said when business complaints come in, officials will call the business to assess or drop in during busy night and weekend hours.

"If it's a situation where there are some egregious violations occurring, that could very well be considered a health hazard, that may lead to temporary permit suspension on the spot,” Grefe said.

Northam said health officials will conduct more pop-up visits and licenses will be on the line.

"Moving us back a phase would mean that all those people who have been trying to do the right thing would be punished,” said Virginia Beach Restaurant Association President BJ Baumann.

Baumann sent a letter to the Governor two days ago asking him not to backtrack. She said she is pleased with his plan so far.

"With some people ignoring the protocols, something has to happen there,” Baumann said.

Hague hopes the Governor's warning is enough and gets everyone on the same page.

"All of our customers stay healthy and all of our employees stay healthy,” Hague said. “That is the biggest concern for us right now."

Grefe said three Virginia Beach restaurants received temporary suspensions back in May. He also shared that no Norfolk restaurants have been suspended for restriction violations.

RELATED: Virginia will stay in Phase 3 for now

But Hampton Roads has recently seen an uptick in #COVID19 cases. The percent positivity is 10.1 percent, and it’s been rising for a number of days.

This increase appears to be driven by people who are not adhering to public health guidelines––and I'm very concerned about that. pic.twitter.com/692ZWYR92Q

That’s why we are taking action today to head this off.

I am directing a multi-agency effort to step up enforcement of our existing guidelines—we are deploying teams to conduct unannounced visits to establishments across Virginia, with a focus on the Hampton Roads area.

We have come a long way together since March.

Because everyone has made sacrifices, we have flattened the curve and kept hospitals from being overwhelmed.

But we can’t act like #COVID19 is gone—as we can see from the data in Hampton Roads, it is not.

We must remain vigilant.