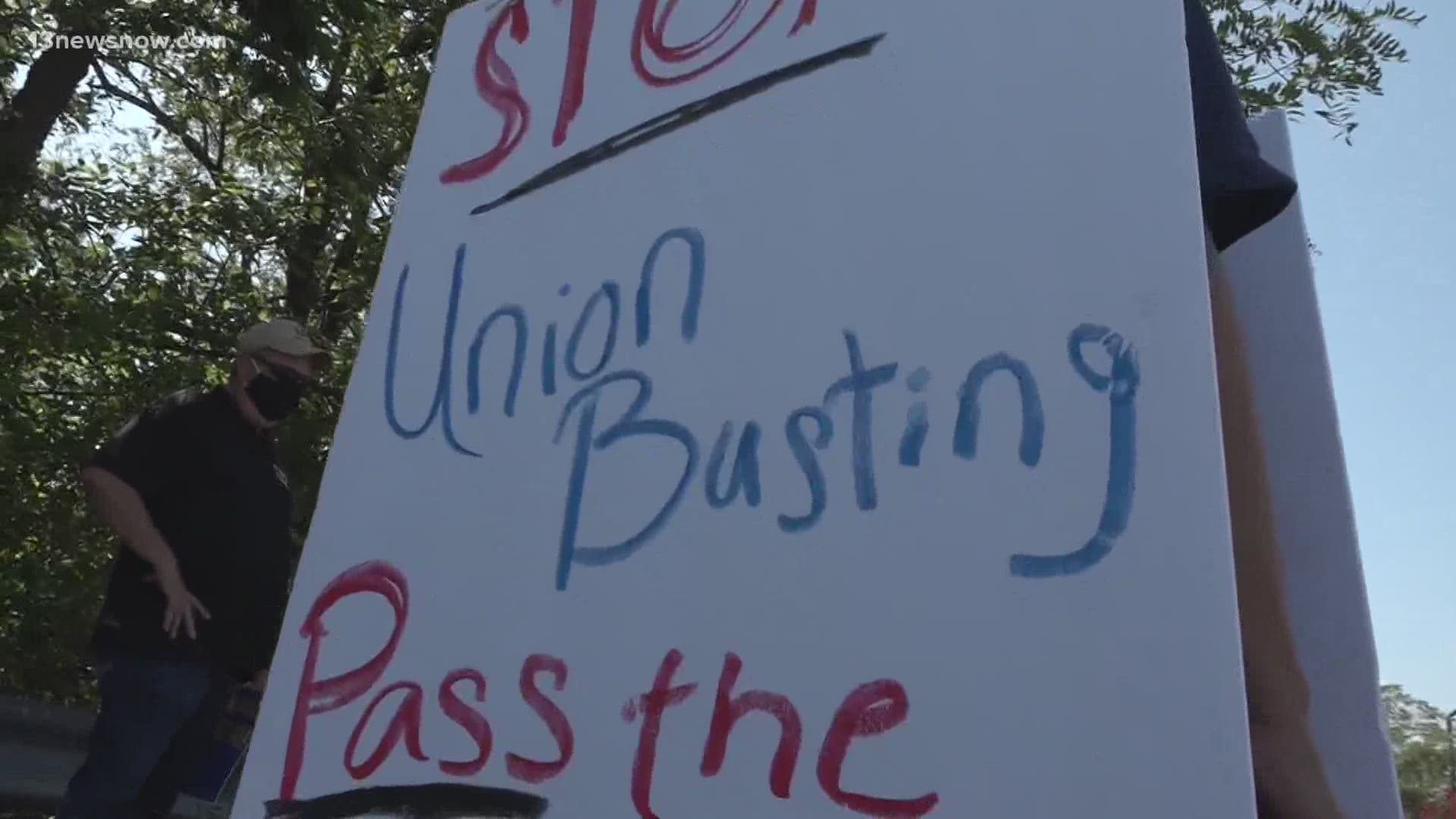 They're calling for more personal protective equipment (PPE), passage of the HEROES Act, an end to systemic racism and anyone trying to undermine union workers at the Hampton VA, and hazard pay, a hot topic across Hampton Roads.

They're also rallying for a fair union contract.

Members said a contract ensures that the agency takes their concerns seriously and that they can hold the VA accountable when they don’t. However, they claim management has abandoned negotiations and refused to bargain in good faith.

Dr. Sheila Elliott is the president of AFGE Local 2328. She said the issues are growing. Dozens of members rallied outside the Hampton VA Thursday afternoon.

"If the VA can't take care of its employees how are they going to take care of the veterans?" Elliott asked. "Mold issues, water issues, we got them over there. Just like the Washington D.C. administration, they just run right over employees."

"Management wanted to claim if we had a mask we were not in a hazardous situation, even if we were wearing the masks for seven days," Elliott said. "I am a God-fearing woman, I have claimed a change."

A spokesman for the Hampton VA said they have no comment.

Hundreds of union members from the American Federation of Government Employees’ National VA Council (AFGE NVAC), the union representing over 270,000 VA workers in over a dozen states will hold protests to demand a fair contract in the lead up to and over the course of Labor Day weekend.

The Department of Veterans Affairs replied to the union's protest, saying the AFGE’s comments lack credibility considering that during the pandemic, Hampton VA Medical Center employees have provided life-saving care to more than 245 COVID patients while adhering to safety practices that have limited its current COVID employee infection rate to 0.8 percent.

The pandemic tested America’s health care infrastructure like few events have in anyone’s living memory, and the Hampton VAMC passed that test because it worked together as a team.

Union bosses should be praising this teamwork rather than trying to sow division.

Regarding Contract Negotiations, the VA adds whether through its condemnation of the MISSION Act or its efforts to repeal the VA Accountability and Whistleblower Protection Act, AFGE has consistently fought for the status quo and opposed attempts to make VA work better for Veterans and their families. It’s no surprise that AFGE has taken the same approach with its refusal to accept commonsense improvements to its collective bargaining agreement.

VA’s collective bargaining proposals, which have been negotiated for several months per AFGE-approved ground rules, are designed to ensure Veterans come first in all that we do, and we look forward to working with AFGE to achieve that goal.