A law firm investigating a racist photo of a man in blackface standing beside someone in KKK robes on Ralph Northam's medical school yearbook page says it's unable to determine whether the governor is in the pic. 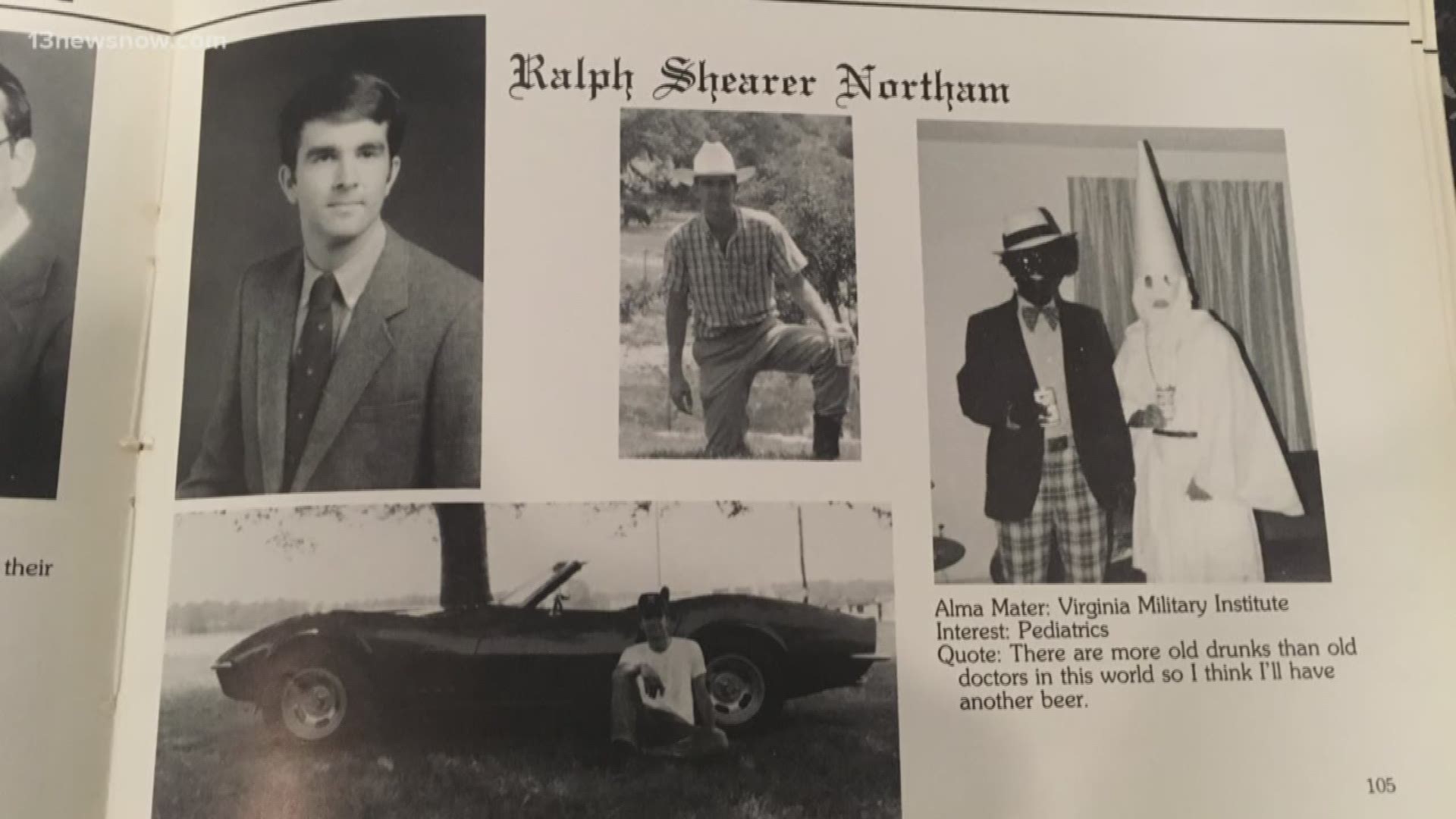 NORFOLK, Va. — Who are the two people seen in a 1984 Eastern Virginia Medical School yearbook photo of future Governor Ralph Northam, one in Ku Klux Klan robes and the other in blackface?

An investigation into the 35-year-old photo came back with this conclusion: inconclusive.

The independent investigation was conducted by the law firm McGuireWoods on behalf of the Norfolk medical school.

The Democratic governor initially acknowledged he was in the picture when it surfaced in February but reversed course the next day, saying he was convinced he wasn't in the photo.

Attorney Richard Cullen was one of the investigators and said Northam "erred on the side of caution initially and immediately regretted not having denied."

Yearbook staff members have disagreed over whether the photo could have been mistakenly placed on Northam's page.

The report found numerous instances of racism and misogyny from the 1970s to 2013, the last year the student-run yearbook was published. The majority of which came in the 1980s, during Northam’s time at the medical school.

Northam has continued to deny he was in the photo or that he had any prior knowledge of the picture on his page.

“While we have identified no information that the Photograph was placed on Governor Northam’s personal page in error or by other means not at his direction, we could not conclusively determine the origin of the Photograph,” the report said.

Northam also said the person in the KKK robes was much shorter than he is.

In the interviews, he said he did not know who the people in the picture are and didn’t want to speculate who they might be.

Northam said he didn’t recall much about the yearbook process, but he did submit other photos that appeared on the page. He did not think it was a prank, as he didn’t really know anyone on the yearbook staff and he was not very social during his time studying at EVMS.

Yearbook staff members interviewed in the report recalled the process of making the yearbook "chaotic," but no one could specifically recall how the offensive photo made its way onto Northam's page, or if it had been done in error.

One revelation from the report was that the previous and current EVMS administrations knew of the photo’s existence.

However, neither the current president of EVMS nor a previous one notified Northam or the public about the photo.

EVMS President Dr. Richard Homan learned of the photo’s existence during the 2017 gubernatorial campaign, but chose not to make it public knowledge or to alert Northam of the photo.

Homan said it was his opinion that the school should remain apolitical and not become involved or give the perception of becoming involved in an election, because EVMS is a public institution.

During a press conference Wednesday, Homan stated he would not have done things differently, as he did not want the school to be perceived as making any sort of political stance.

The report stated because the yearbooks were no longer produced, Homan “wanted the school to move forward with new initiatives rather than focus on the past.”

Meanwhile, the chairman of the Virginia Legislative Black Caucus said little has changed following the release of the report on Wednesday.

State Delegate Lamont Bagby said there's "no news" in the investigative report. He said lawmakers should focus instead on fixing long-standing racial disparities in Virginia.

Following the release of the report and Wednesday's news conference, Governor Northam reiterated his longstanding denial that he's in the racist photo.

Northam said he was sorry for how he responded and said he's working on addressing longstanding racial inequities.

Governor Northam's full statement is below:

"I have cooperated with Richard Cullen and his team over the course of their investigation, both by making myself available for interviews and by turning over the findings of my private inquiry into the matter. I am not in the racist and offensive photo that appears under my name in the 1984 Eastern Virginia Medical School yearbook.

"That being said, I know and understand the events of early February and my response to them have caused hurt for many Virginians and for that, I am sorry. I felt it was important to take accountability for the photo’s presence on my page, but rather than providing clarity, I instead deepened pain and confusion.

"In visits with local leaders across the Commonwealth, I have engaged in frank and necessary dialogue on how I can best utilize the power of the governor’s office to enact meaningful progress on issues of equity and better focus our administration’s efforts for the remainder of my term. That conversation will continue, with ensuing action, and I am committed to working to build a better and more equitable Virginia for all who call it home."

"The Republican Party of Virginia's call for Ralph Northam's resignation is unwavering. Ralph Northam admitted to wearing blackface and embarrassed our Commonwealth on an international scale. Only one person has confessed to being in the racist photograph, and that person is Ralph Northam.

"While the Governor has been professing ignorance as to the origin of the photograph or its inclusion in his yearbook entry, his subsequent actions - including his reversal on a 60-day mandatory minimum sentence for abusers convicted of domestic violence - suggest a guilty conscience.