The origins of Lee-Jackson Day in Virginia

An explanation of the history behind the controversial holiday and how it could soon be a thing of the past. 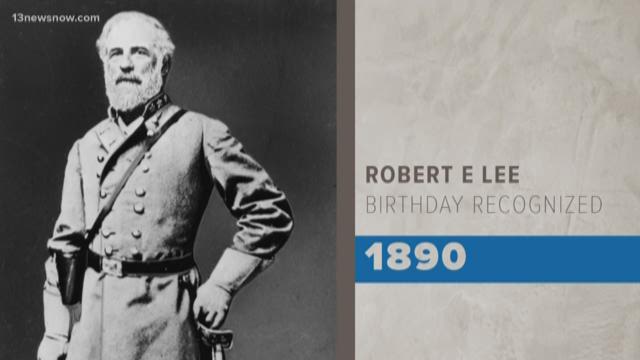 RICHMOND, Va. — The origins of the holiday date back over 100 years. The Virginia General Assembly designated Confederate General Robert E. Lee's birthday as a holiday back in 1890, according to the Richmond-Times Dispatch.

In 1904, the Assembly made the holiday Lee-Jackson Day, to honor another Confederate general, Thomas "Stonewall" Jackson.

In 2000, those two celebrations were separated.

Celebrating Confederate generals continues to be a controversial topic. Locally, Norfolk, Newport News, and Hampton choose not to observe the holiday.

Gov. Ralph Northam has even proposed eliminating it entirely and make Election Day a state holiday. Norfolk Delegate Joseph Lindsey has introduced a bill in the current session (HB 108) to do just that.

RELATED: Two Confederate monuments in Richmond have been vandalized