About 1,500 educators from around the commonwealth rallied on Capitol Hill for a VEA 'Fund Our Future' protest 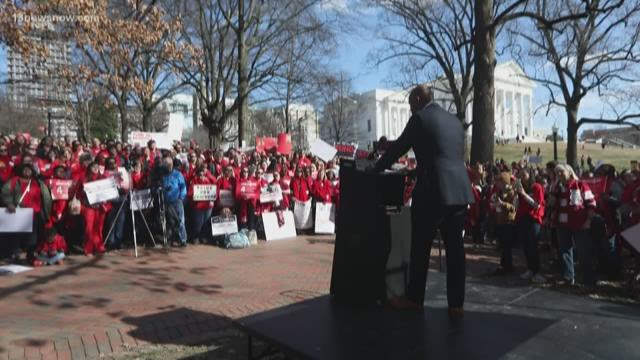 RICHMOND, Va. — The Virginia Education Association hosted a rally at the State Capitol to call on lawmakers to increase state funding for public education.

Shouting that lawmakers should "fund our future," about 1,500 educators wore red for the protest on Capitol Hill, the latest push for growing teacher compensation in the Commonwealth.

Seatack Elementary teacher Anthony Waldo said he rallied to advocate for the little voices, like his young students.

“I want equity across the board for all students, so that everyone is able to succeed at the same rate and a fair rate," Waldo said.

Walker said recruiting teachers is growing increasingly difficult, with teacher salaries failing to keep up with rising student loans or other costs of living.

In addition to teacher compensation, Waldo and Walker protested for collective bargaining rights.

“I think that alone would allow educators the voice they need to help our students and our communities," Walker said.

Waldo said he hopes lawmakers hear the cries for more public education funding, but he

“I feel encouraged but I still don’t know if this will be enough," Waldo said. “I think it’s gonna take a little bit more to be heard and to be meaningful."

The VEA is a union of more than 40,000 teachers and school support professionals.