The special prosecutor looking at whether members of former Congressman Scott Taylor's campaign violated Virginia law by helping his opponent get on the ballot believes at least one person committed election fraud. 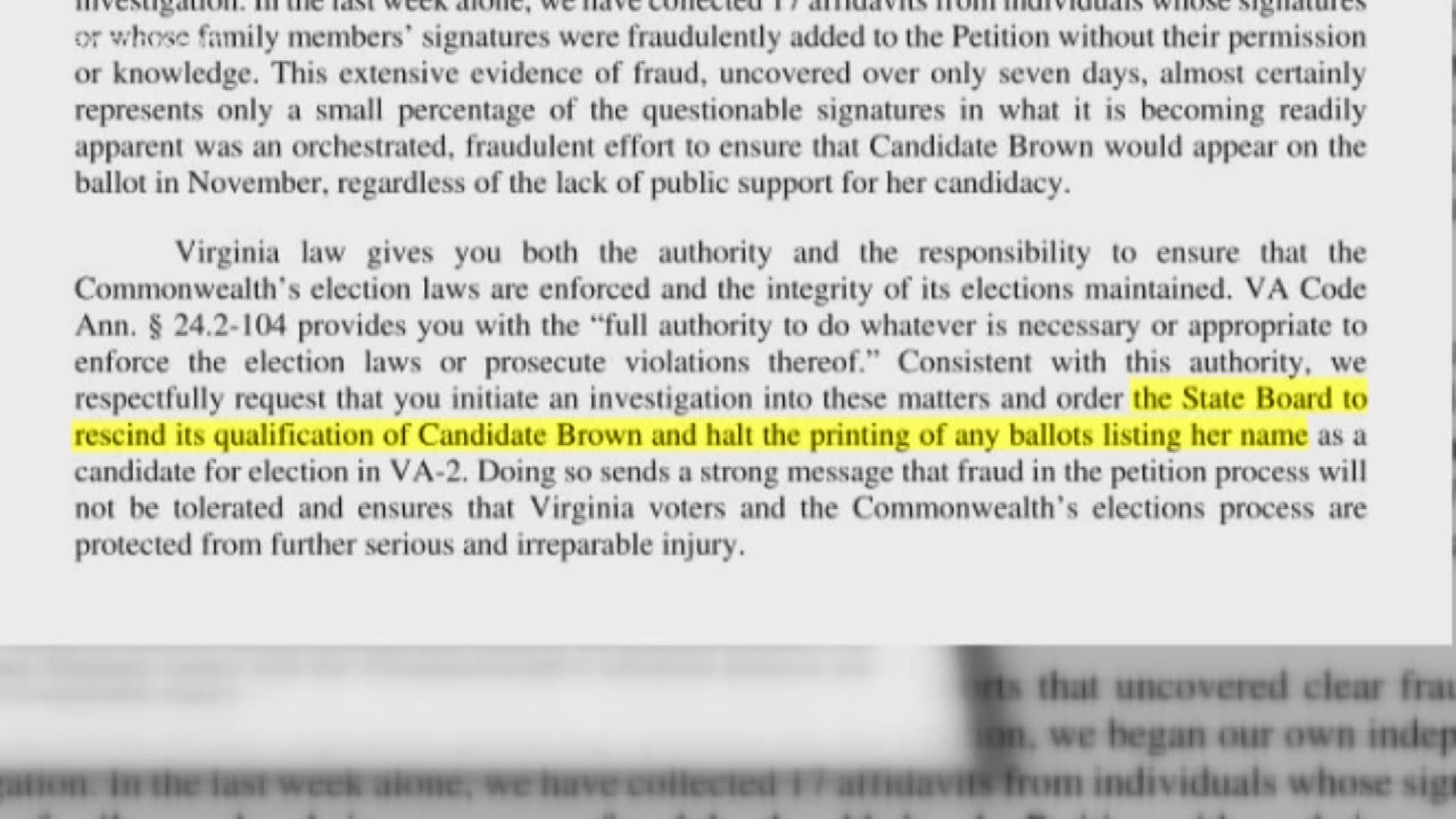 VIRGINIA BEACH, Va. — The special prosecutor heading up the investigation into potential violations during the race for the U.S. House of Representatives 2nd Congressional District said at least one person committed Election Fraud.

Donald S. Caldwell stated in a news release that he presented two indictments against someone from former Congressman Scott Taylor's camp. 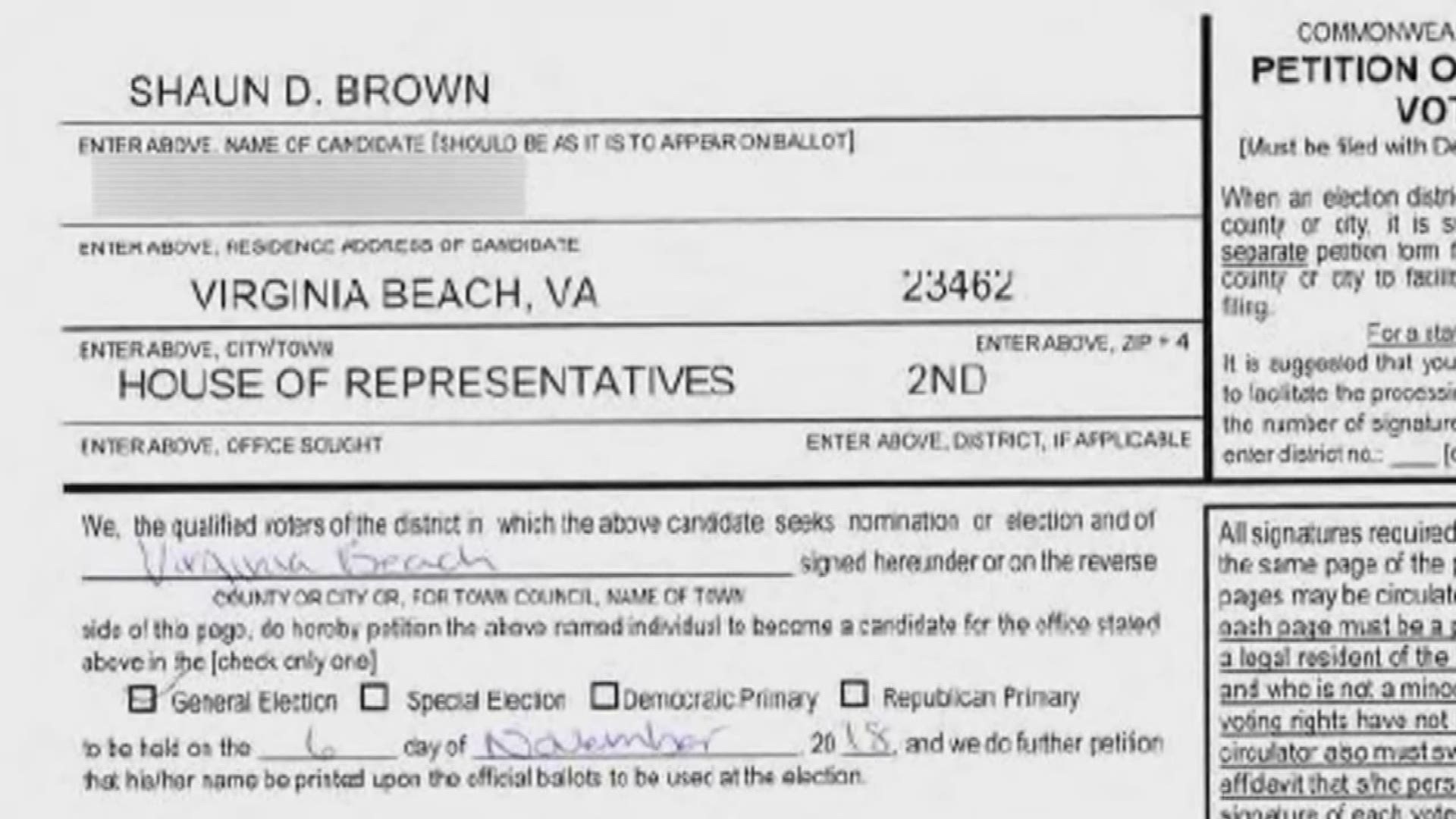 Caldwell, who also serves as the Commonwealth's Attorney of Roanoke, said at this stage of the investigation there is no indication that Taylor was involved.

Taylor was the Republican candidate hoping for reelection in 2018. He lost the 2nd Congressional District seat to Democrat Elaine Luria. Questions arose about efforts of Taylor's campaign to get Independent Shaun Brown on the ballot.

A judge ruled that Brown's name had to be removed from the ballot after questions arose as to whether signatures that appeared on the petitions had been forged.

Brown currently is serving a federal prison sentence that isn't related to the election.

Although Caldwell said there was conversation in Taylor's office in Washington, D.C. on or around June 1, 2018 "where a decision was reached to support Ms. Brown's effort by suing available campaign resources to circulate petitions on her behalf," doing so, in and of itself, is not a crime. Caldwell said there did not appear to be a directive given or an expectation that anyone would violate Virginia law.

The responsibility of circulating petitions on Brown's behalf fell to people at Taylor's headquarters in Virginia Beach. Caldwell wrote: "Ultimately, some 56 petitions were submitted to the Virginia Department of Elections by the Shaun Brown campaign, which can be traced back to individuals associated with the Taylor campaign."

Caldwell said in his news release: "At this point in time, what actually happened within the campaign headquarters is still a subject of investigation due primarily to the lack of cooperation of key individuals with the VSP investigator. The full explanation of what happened will hopefully be answered in the months to come."

The special prosecutor stated that he believes the indictments for Election Fraud he presented against Creekmore are "supported by proof beyond a reasonable doubt."

The special prosecutor's release today makes it concretely clear, as I have maintained all along, I knew nothing about any illegal actions that transpired. Further, it is entirely appropriate to hold those accountable for their actions in this matter.

It was also a breach of public trust to see the Democrats falsely state I was under investigation, when they knew this was never the case, and direct the creation of ads containing numerous demonstrably false statements. Today serves as a complete repudiation of the smears and lies leveled against me in the campaign last year. I was not ever aware of any wrongdoing by my campaign until the allegations came to light. Today's release by the special prosecutor is complete vindication in that regard.

Given the positive polling before the petition issue came to light and the close loss we suffered on Election Day, it is clear the millions spent by the dishonest Democrats impacted the outcome of the race.

Since I was 18, I have been called to service. That call has not subsided in me and I intend to stay engaged. I have lived up to the standards of integrity and character instilled in me by mother, mentor, and the military throughout my time in public office. The update provided on the investigation today confirms that.