The United States Coast Guard and Navy are preparing the bases and resources ahead of the storm. 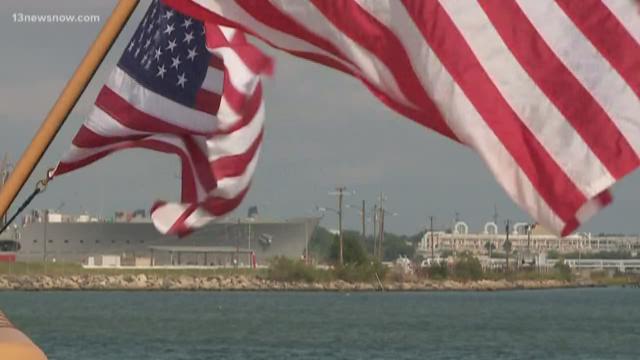 NORFOLK, Va. — With Hurricane Dorian predicted to carve its way to the east coast, it isn't just civilians who are getting ready.

"This is a storm we very much need to pay attention to and prepare for," said Captain Kevin Carroll with the Hampton Roads Sector of the United States Coast Guard.

Captain Carroll is taking the potential threat of the storm seriously and wants everyone to as well.

"The Coast Guard is taking precaution with our small boats and our cutters and we're sending them to different areas outside of where the impact of the storm will be. That's very important for people to understand because if you're going to be on the water during the storm, it's very likely that we will not be able to assist you," he said.

"Our first priority is protection of the fleet," said Admiral Rock.

That includes ships, aircraft, submarines, and most importantly, sailors and their families.

"We're responsible for ensuring that our infrastructure is safe that our buildings are keeping our sailors safe, and that includes sandbagging and cleaning out drains," he said.

Even on different grounds, Admiral Rock and Captain Carroll are on the same page.

"Take it very seriously, and prepare yourselves and your families," said Admiral Rock.

"You have to heed any warnings or evacuations that come from the commonwealth of Virginia," Captain Carroll said.

The Navy is warning sailors to not park their cars near the waterfront.

If you must park your car on base, Navy officials said they should be parked at lots away from the water such as the movie theater, the parking lot in the center of the base, or on the airside.

There will also be a shuttle service from the Navy Exchange and pool to help with waterfront commands.

1 / 5
NAS Oceana
NAS Oceana personnel are busy preparing for the potential impacts of Hurricane Dorian. Sailors are filling sandbags, testing generators and preparing supplies to minimize the potential for damage from the storm.