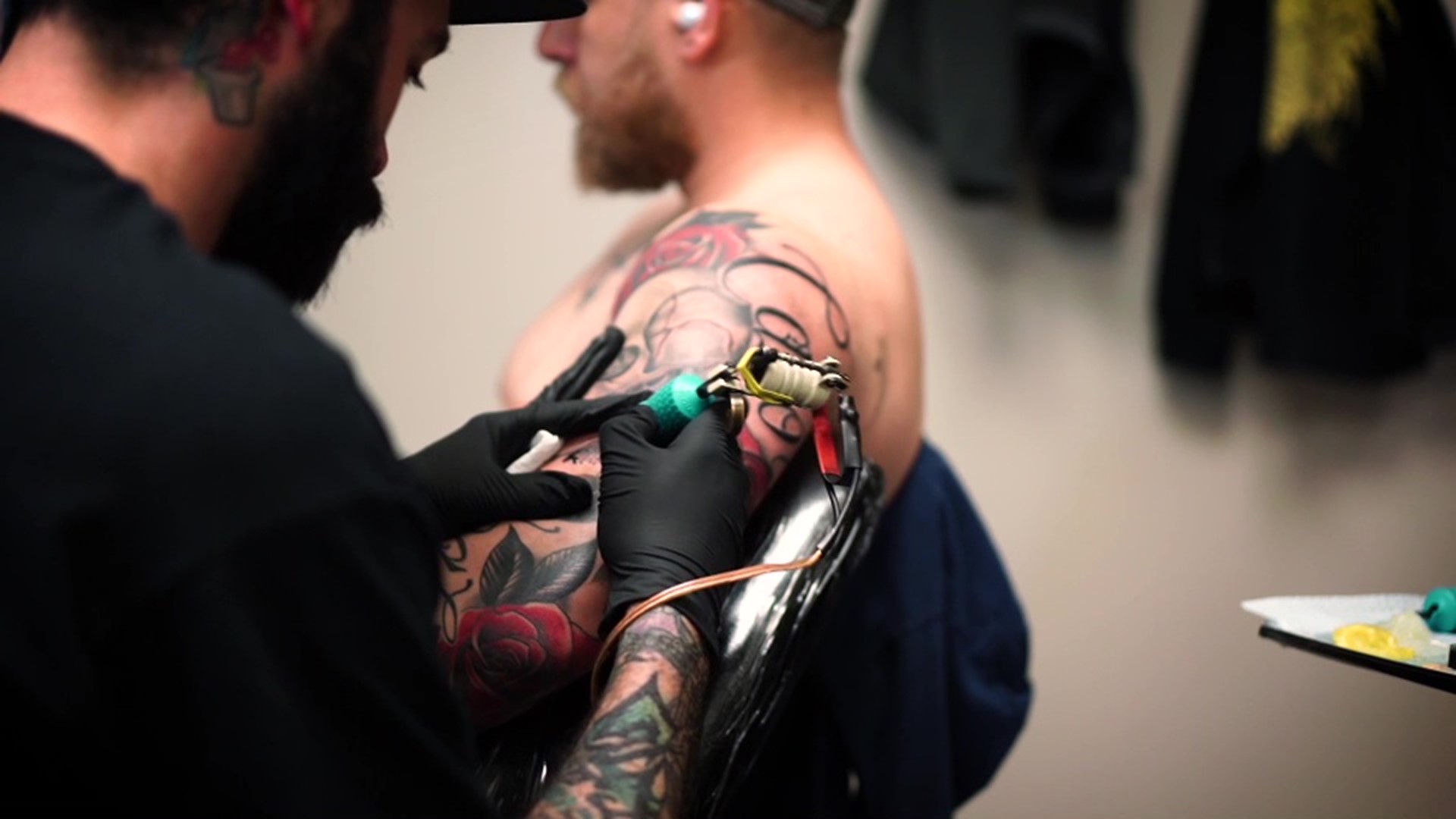 VIRGINIA BEACH, Va. -- In 2014, Carl Fuchs and Chris Garcia, two passionate and seasoned tattoo artists from Virginia Beach, joined forces to open Red 5, a premier tattoo parlor that is home to six award-winning artists who can take on many different styles of tattooing.

Co-owner Carl Fuchs has worked as a professional tattooer in Hampton Roads for many years.

“The thing that really made me want to become a tattooer was actually some encouragement that I had gotten from my grandmother,” Fuchs explained. “She wanted me to use the gift of art that had been given to me as a career. So I decided to start an apprenticeship in tattooing.”

Chris Garcia, Carl's business partner and the shop's co-owner, began tattooing his friends and family first and then eventually landed a job at a tattoo studio in Yorktown. Carl and Chris met for the first time when Carl traveled to Yorktown to receive a tattoo, and Garcia just so happened to be the artist to do it. Garcia worked under J.D. Crowe, a local tattoo pioneer who challenged the city of Virginia Beach on a long-standing ban that prohibited tattoo studios from being able to operate on the south side of Hampton Roads.

Thanks to his efforts, the ban was eventually overturned in both Norfolk and Virginia Beach. In 2009, Chris ended up moving to Las Vegas to pursue an opportunity at another studio.

“I guess I was just looking for room to grow myself as a tattoo artist,” Garcia said. “In 2014, my wife found out she was pregnant so that’s when I started thinking about coming back here to Virginia because most of my family is here.”

On a trip back home that year, Fuchs and Garcia reunited during a tattoo session between both of them. It was at this very moment when the initial idea of opening a business together came about.

“He asked me which studio would be the best fit for him coming back so he could start researching which studio to work for,” Fuchs stated. “I felt personally that the studio that we as tattooers aspire to work for did not really exist at the time.”

"That’s when we got to talking about tattoos, our perspective on tattooing and it turned out that we were on the same page when it came to a lot of different aspects of tattooing. So the conversation naturally went into opening a tattoo studio together,” Garcia recalled.

However, the two artists ran into many obstacles while trying to open their parlor. Though the long-standing ban on tattoo studios was overturned, Virginia Beach still held strict regulations regarding where a tattoo studio could set up shop. On top of the fact that many businesses did not want tattoo studios around them, limiting a lot of their possibilities.

“Not even the businesses, but the commercial property owners felt like we would bring their value down being a tattoo studio and it was really based on all of these perceptions of what a tattoo studio was,” Carl said.

They eventually pursued the option of buying out an already existing tattoo studio, finally bringing Red 5 to life. The studio opened December 6th, 2014. Fuchs and Garcia make it their mission to provide the highest quality of work for their customers and an environment that fosters both creativity and consummate professionalism. Carl says that their goal is to battle the stereotypes that surround the art of body tattoo.

“People in the public tend to perceive it as something that bikers and outlaws do and there’s lots of drugs and drinking going on and there are very unsavory people. But the fact of the matter is is that there are plenty of hardworking and just good people who just want a good tattoo,” Carl exclaimed. “Which is one of the reasons why we opened the studio and run it the way that we do because we are trying to show that there is a lot of art and culture behind this and it’s not just a party and it’s not to be taken lightly.”

Red 5 celebrates raving reviews online and it’s apparent that their business model has worked in their favor. Quality over quantity is what they value. Not only surpassing their clients’ expectations but also providing a hospitable and safe experience for them as well.

“When clients come, I want them to leave with a good quality tattoo. I want to make sure that they have a pretty good experience as well,” Garcia stated. “We try to work as a team and develop each other so then, that way, it raises the bar for everyone and everyone continues to grow and get better. Not only as a tattooer but as an artist in general,” Fuchs claimed.