The Congressman wanted to talk with school principals in the cities he represents about how they're handling plans to reopen schools during a pandemic. 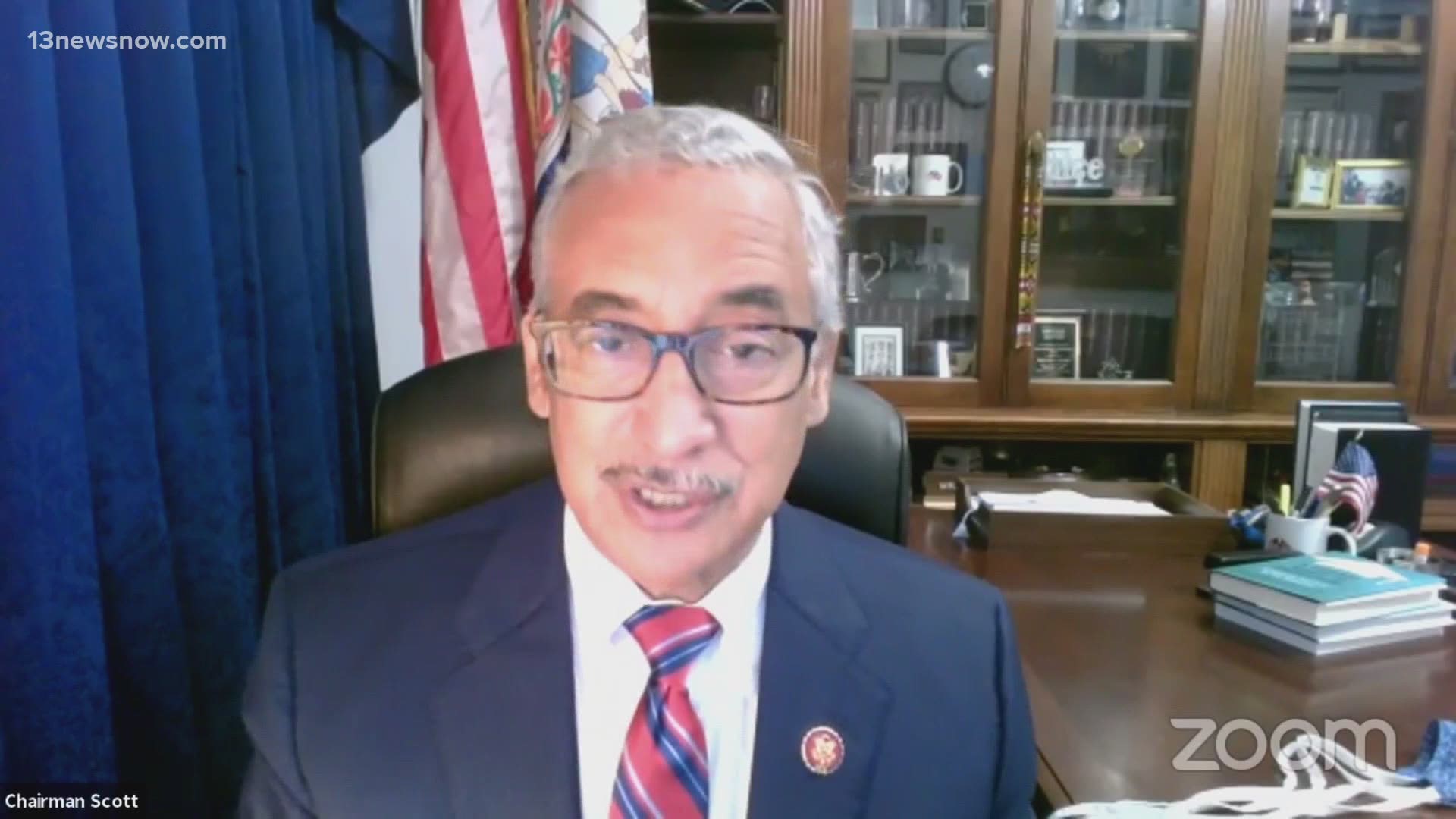 NORFOLK, Va. — Via video call, Congressman Bobby Scott (D-Va.) sat down with school principals from across the district he represents to discuss how school instruction will safely proceed in the fall during the COVID-19 pandemic.

Scott represents Newport News and Portsmouth as well as parts of Norfolk, Chesapeake, Hampton, and Suffolk.

School district leaders are having to wrestle with how to safely reopen schools and instruct students while the pandemic lingers and cases continue to mount in parts of Virginia, particularly Hampton Roads.

Scott held the virtual roundtable with principals Wednesday morning. He spoke with teachers in the 3rd Congressional District last week on the very same issue.

Scott has worked to move two pieces of legislation forward in the House of Representatives that would devote more than $200 billion to help reopen schools safely.

During the call, Scott said more federal funding is needed in order to safely reopen schools.

"The lack of funding and resurgence of COVID-19 will make it clear that schools simply cannot safely reopen without significant support," said Scott.

He's also called for the Centers for Disease Control to appear before the House Committee on Education and Labor, which he chairs, to discuss the safest ways to reopen schools. However, the White House blocked the head of the CDC from testifying before the committee.

Scott called it alarming that the Trump administration would prevent CDC officials from appearing before the committee “at a time when its expertise and guidance is so critical to the health and safety of students, parents, and educators.″

Principals all agreed. The path forward for students this fall is challenging.

The issue of internet access was just raised by Kristy Buggs, the Principal at Georgie Tyler Middle School in Isle of Wight County. She says middle and high school students will have chromebooks, but whether or not they’ll have internet at home is a big concern. #13NewsNow pic.twitter.com/pYdSLh8A0f

During the call, Walter Brower, the principal at Norview High School in Norfolk, said he's concerned about the potential of students not returning to the classroom.

“I’m just worried about the kids, parents, faculty, staff, and mental health,” said Brower. "We will weather the storm, definitely."

He’s not alone. Principals and administrators are under intense pressure as they try to develop plans for the start of the new school year.

Dr. Bryce Johnson, the principal at Tyler Elementary School in Hampton, said school leaders in his city expect to finalize a plan next week.

"We want those kids in the class as much as we possibly can, but we also have an issue of personal safety. We’re not ready to make that decision in Hampton,” said Johnson.

“We’re a rural locality, so we have children spread out all over our county, and access to the internet is not in every area of our division," said Buggs.

Buggs said middle and high schoolers in Isle of Wight have received Chrome Books for remote learning, but elementary school students do not have them.

The issue of engaging students during remote learning was also discussed.

Angela Flowers, the principal at Park View Elementary School in Portsmouth, said accountability and close communication with parents will be key in order for students to succeed during remote learning.

“What we’re finding in summer school is that students are doing the work, but not logging onto the virtual classroom,” said Flowers.

Portsmouth's summer school program has served as a preview of how remote learning will work. Flowers said of the all students in Portsmouth Public Schools who were required to attend summer school remotely, only 50-percent participated.

Scott said the top priority remains welcoming students back into the classroom for in-person instruction as soon as possible.

"The in-person instruction is critical to academic success, access to nutrition, emotional learning, and it allows us to detect cases of child neglect," said Scott.

RELATED: What are the back-to-school plans for each school system across Hampton Roads? Here's a list.