One police chief says diversifying police departments has always been a challenge. 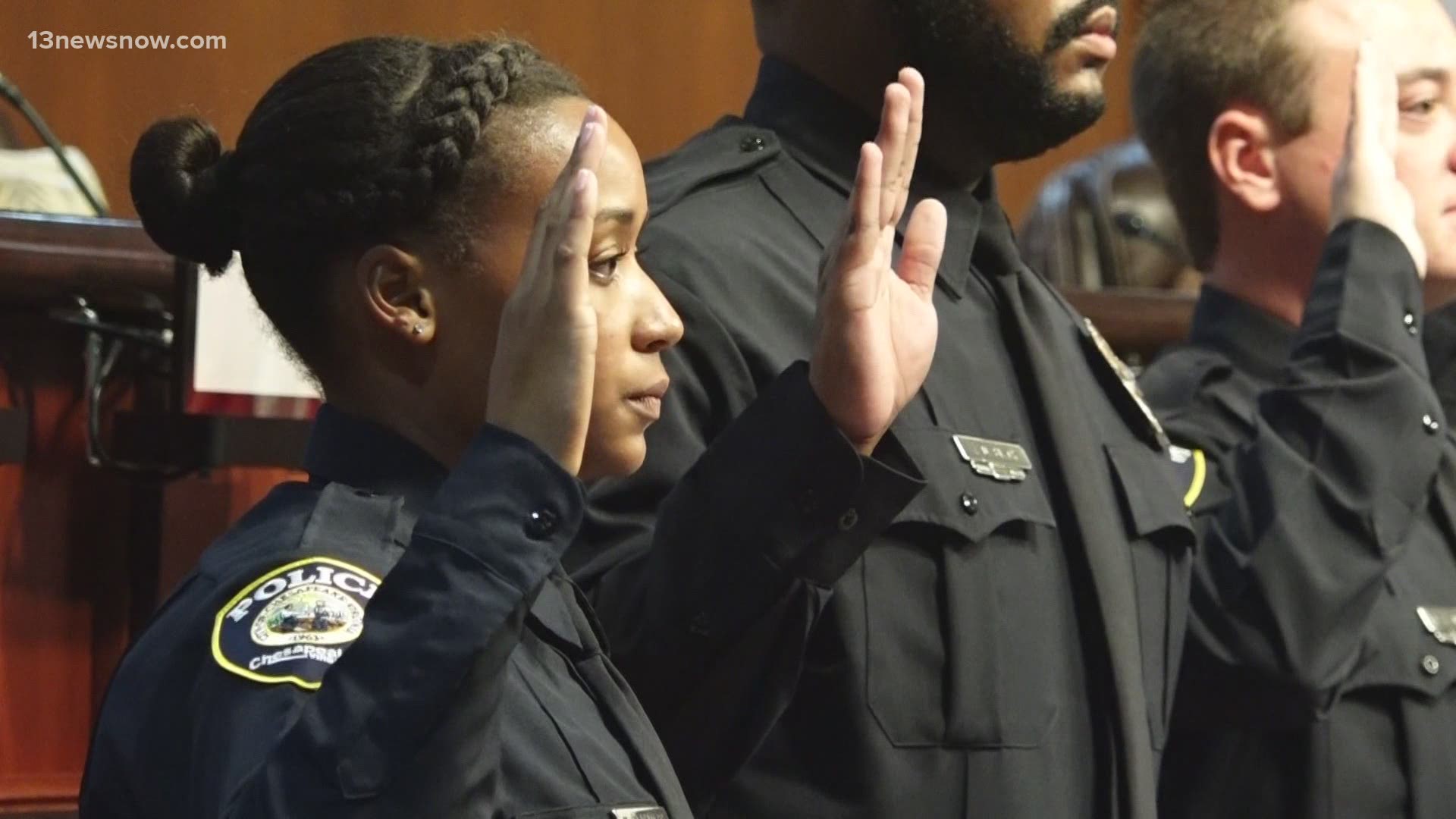 NORFOLK, Va. — Hampton Roads is made up of diverse communities. But when it comes to police departments, that’s not always the case.

A 13News Now investigation reveals no department in Hampton Roads fully mirrors the demographics of the communities they serve.

While there are success stories to be found, one police chief says diversifying departments is no easy task in 2020.

"THIS IS A COUNTRY ISSUE"

Norfolk Police Chief Larry Boone said it is fair and important to compare police demographics to their cities at large.

“We have a host of all races here, and it’s important that we represent the city,” Boone said. “In the reform police atmosphere, people want to know what your department looks like. We need to be transparent.”

“It tells you we’re not quite where we need to be,” Boone said. “We’ve still got work to do by way of diversity, but not just us: Virginia Beach, Portsmouth, Newport News, Hampton, Richmond, everybody else. This is not just a Norfolk issue, this is a country issue.”

Hampton has the largest share of minority officers in Hampton Roads, with 25 percent of its officers listed as Black. But it’s still a far cry from the city as a whole, where the majority of residents (53 percent) are Black.

Newport News Police Chief Steve Drew told 13News Now he joined the force two years ago and made it a priority to make Spanish-speaking officers available to community members who don’t speak English.

“Our recruiting team uses various resources to seek out qualified candidates who speak fluent Spanish and we strive for at least two percent of each academy class to meet this requirement. So far, we have been successful,” Drew said.

But it appears the department is making improvements to diversity its force.

Of the 66 officers they hired in 2020, 35 percent are Black, which is getting closer to mirroring the city at large.

Police nationwide found themselves in the spotlight this year following the high-profile deaths of Brionna Taylor and George Floyd at the hands of police.

The ensuing social unrest in major American cities became a major issue in the 2020 Election and inside police departments nationwide.

“I’ve never seen anything like this,” said Norfolk Police Chief Larry Boone. “I was here when the Rodney King incident occurred, there was some ruffling there. With Ferguson, there was similar concerns. But this is different. You’ve got police chiefs resigning. Not just officers, police chiefs.”

In Norfolk, Chief Boone said some of his officers have grappled with the decision to end their careers in law enforcement.

“In the last four to five months, folks have sat right there and said, 'Chief I can’t do this anymore,'” Boone said.

Boone said despite incidents like the Floyd murder in Minneapolis, the challenge of recruiting minorities is not unique to 2020.

But while some officers are choosing to leave the profession, others are signing up for service, including a young woman in Chesapeake.

CALLED TO BE A COP

Most officers will tell you that law enforcement is not a career, it's a calling.

For Mikalya Beasley, that calling came when she was a young teenager living in Chesapeake.

“I had always wanted to be an officer, I just didn’t know how to go about it,” Beasley said.

When Beasley was 15, her father took her to the Chesapeake Police Department to meet with any available officer.

Detective Dorienne Boykin was available and willing to speak with the young girl.

“Detective Boykin at the time comes down and starts talking to me,” Beasley said. “It clicked in my head that there are officers like this, and this is what I want to do, and that’s what I want to become.”

Boykin, now a sergeant in the department, saw some of herself in Beasley and helped mentor the young woman along the way.

“The last four years we’ve gotten close, and just guided her on the path that she’s on now,” Boykin said.

Beasley’s path over the past five years led her to the Chesapeake Police Academy around the same time the Brionna Taylor and George Floyd incidents were shining a spotlight on policing.

“It definitely put a lot in perspective, being African-American and being female, but that didn’t change what I wanted to do and what I’m here for,” Beasley said. “I didn’t waver on being a police officer or not, I still wanted to do this.”

Beasley stuck with her dream, earned her badge this September, and is now patrolling the streets of Chesapeake.

Her journey from dream to badge is a success story for the Chesapeake Police Department where African-Americans make up 14 percent of the department but 30 percent of the city's residents.

But the department is making strides in diversifying its force, according to a 13News Now analysis of recent recruiting classes.

It was one of Chesapeake’s most diverse academies ever.

Sergeant Boykin, who is a Black woman herself, hopes she and Beasley can be an example for others who feel the same calling to law enforcement.

“You can also be a wife and a mother and still hold your own in this male-dominated field,” Boykin said. “That’s important for me to pass on, especially to any younger women in the department that may need women role models.”

But while Chesapeake is recruiting more females to the force, there are currently no women on the department’s command staff.

DIVERSITY FROM THE TOP-DOWN

13News Now also analyzed the demographic makeup of the command staffs in each department, which normally consists of the chief, assistant chiefs, and other top-ranking officials like captains.

Chief Larry Boone in Norfolk said departments should be diverse from the top on down.

“Diversity is important, but it really isn’t enough if you don’t have people at the table in decision-making positions," he said. “You have to have folks at the table that have the ability to have input as it relates to their lens.”

She is one of four African-Americans on Chief Boone’s command staff but the only woman on the leadership team.

“We’re playing catchup compared to some years ago," Boone said. “There’s no doubt in my mind within a year or two, maybe three, we’ll have an assistant chief who is a female, perhaps a chief, and a couple of captains. They’re already in the hopper. It’s just a matter of time.”

Virginia Beach has an all-white command staff. Meanwhile in Chesapeake, Suffolk, Portsmouth, and Newport News, between 15-and-25 percent of the command staffs are African-American. Hampton has the highest percentage of minorities on a command staff with 50 percent.

The recruitment for new and qualified officers never ends, regardless of the city or the year.

Nationally, women make up just 12 percent of all officers.

“Our current percentage is at 18,” Chief Drew said. “We are hopeful our recruitment efforts will increase this number even more.”

“We work hard to try to diversity our police department but what’s more important to me is your heart, and how you go about serving the citizens of Norfolk," Boone said.

Boone recognizes the challenges still ahead for law enforcement.

In May, as people rallied in the name of justice for George Floyd, Boone joined the demonstrators and carried a sign that read "Black Lives Matter."

Credit: WVEC
Chief Boone joined demonstrators in May calling for justice in the death of George Floyd.

“We have a long way to go to build authentic trust,” Boone said.

He believed recruiting the next generation of officers starts by building trust with those already wearing the badge.

Even those at the top of the department.