Man on the Roof: Habitat for Humanity of South Hampton Roads to hold unique fundraiser

For the week, Frank will be on the roof eating, sleeping, working and talking on social media about how Habitat SHR is doing their part to help the environment. 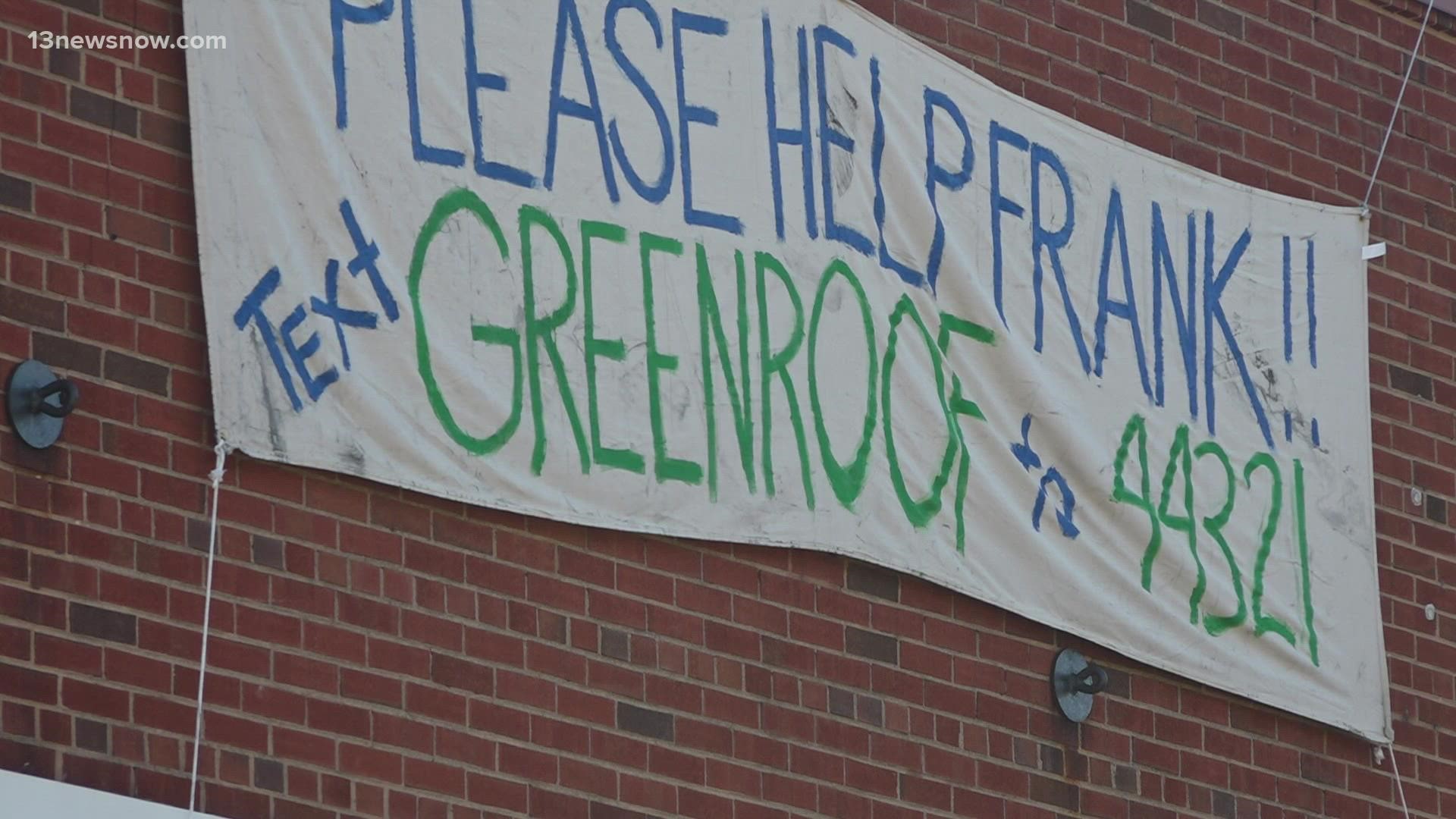 On top of the Habitat for Humanity of South Hampton Roads (Habitat SHR) building in Norfolk you'll find its executive director Frank Hruska.

"I got to be honest," Hruska said. "I'm outside my comfort zone. I'm a Marriott type of guy, but I slept outside in a sleeping bag last night."

For the week, Frank will be on the roof eating, sleeping, working and talking on social media about how Habitat SHR is doing their part to help the environment by reducing their carbon footprint and cutting down on electricity.

He's been on the roof since Sunday afternoon and will live there until October 3.

Monday morning, volunteers built a shed for Hruska which will later go towards a home in Suffolk the team is constructing. For now, this will make his week-long stay on the roof a little comfortable.

Habitat SHR is hosting this fundraiser as a part of their Going Greener Renewable Energy Project. They want to install solar panels on the roof of their headquarters in order to reduce energy costs and put that money towards home construction.

LIVING ON THE ROOF: The executive director of Habitat for Humanity of South Hampton Roads is staying on the roof of the building for a week.

It’s to raise money to replace the roof and then install solar panels to reduce energy costs. pic.twitter.com/6WAaowsAGO

But first, they need $250,000 to bring their roof up to code for the installation.

“Without a new roof, we’re unable to initiate our Going Greener Renewable Energy Project,” Hruska said. “Our building has a lot of life left in it, but we must replace the roof in order to install the Solar panels, save money and help protect the environment."

He says the solar panels will also save the organization thousands of dollars each year.

"So, it's a double win," he said. "We're helping the environment and two in the long run we're going to have more money in our bank accounts so we can build more homes for low income families in Hampton Roads."

Posted by Habitat for Humanity of South Hampton Roads, Inc. on Thursday, September 16, 2021

Leaders in the community are also scheduled to come up on the roof with Frank and chat about the importance of reducing fossil fuel use on Facebook Live.

“Their electric bill will be reduced to zero,” Ruth McElroy Amundsen of Norfolk Solar said. “So this is really an investment which enables Habitat for Humanity SHR to continue their vital work of building safe, decent, and affordable homes for local low-income families.”

Those who are interested in donating to this fundraiser can click here. You can also follow along and keep up to date on what's going on with Frank for the week on their Facebook page.

Since 1988, Habitat SHR has constructed 238 homes for families in need throughout Hampton Roads.

Restaurants donating meals for Frank throughout the week are the following: