Women United, a part of the United Way of South Hampton Roads, comes together once a year to make 2,500 meals in just one hour for those in need. 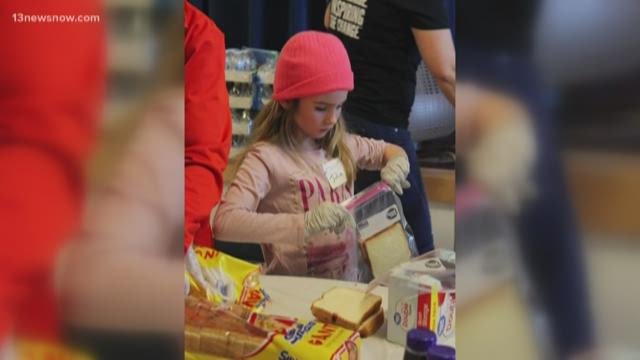 NORFOLK, Va. — What's in a name? Sometimes, it's more than you think.

A Navy veteran and mother of five works a full-time job. But in her spare time, she helps those in need. Her name is Charity.

"Giving and helping others is an instant, one hundred percent return on investment," she says. "If things are important, you make them happen. And this is important to me."

Charity Anderson is a board member of Women United, a part of the United Way of South Hampton Roads.

In the fable, hungry strangers convince the people of a town to each share a small amount of their food in order to make a meal that everyone enjoys. The moral of the story is to share.

"I do help organize and facilitate the event, but it's not a charity event-- no pun intended! It is about many hands coming together to do the work the one person cannot."

And for her, charity begins at home. "It's very important to me that [my] kids have a sense of how to give back to their community," Anderson says.

"So, when our kids started participating in 'Stone Soup', they were at [the] peanut butter and jelly table, making sandwiches and making lunches. But as they've grown, they have shifted to other activities."

It's been a little more than eight years since Anderson joined Women United, but she says she's just getting started. "Our role really is to reach back and lift up women that are ten years behind us," says Anderson.

"I'm hoping that I can be a part of creating a new group of women leaders."

The next 'Stone Soup' event is Saturday, February 1. For more information, visit https://unitedwayshr.org/.

RELATED: MAKING A MARK: Local woman passes down love of dance to the next generation

RELATED: MAKING A MARK: Local nonprofit helps to improve the quality of life of seniors

RELATED: MAKING A MARK: Two groups come together to empower kids through music