'This is not over. This is just the beginning.' | Donovon Lynch's family calls for federal investigation

The family's attorney said he has evidence that Lynch's body was moved to a different spot after he was shot during the investigation. 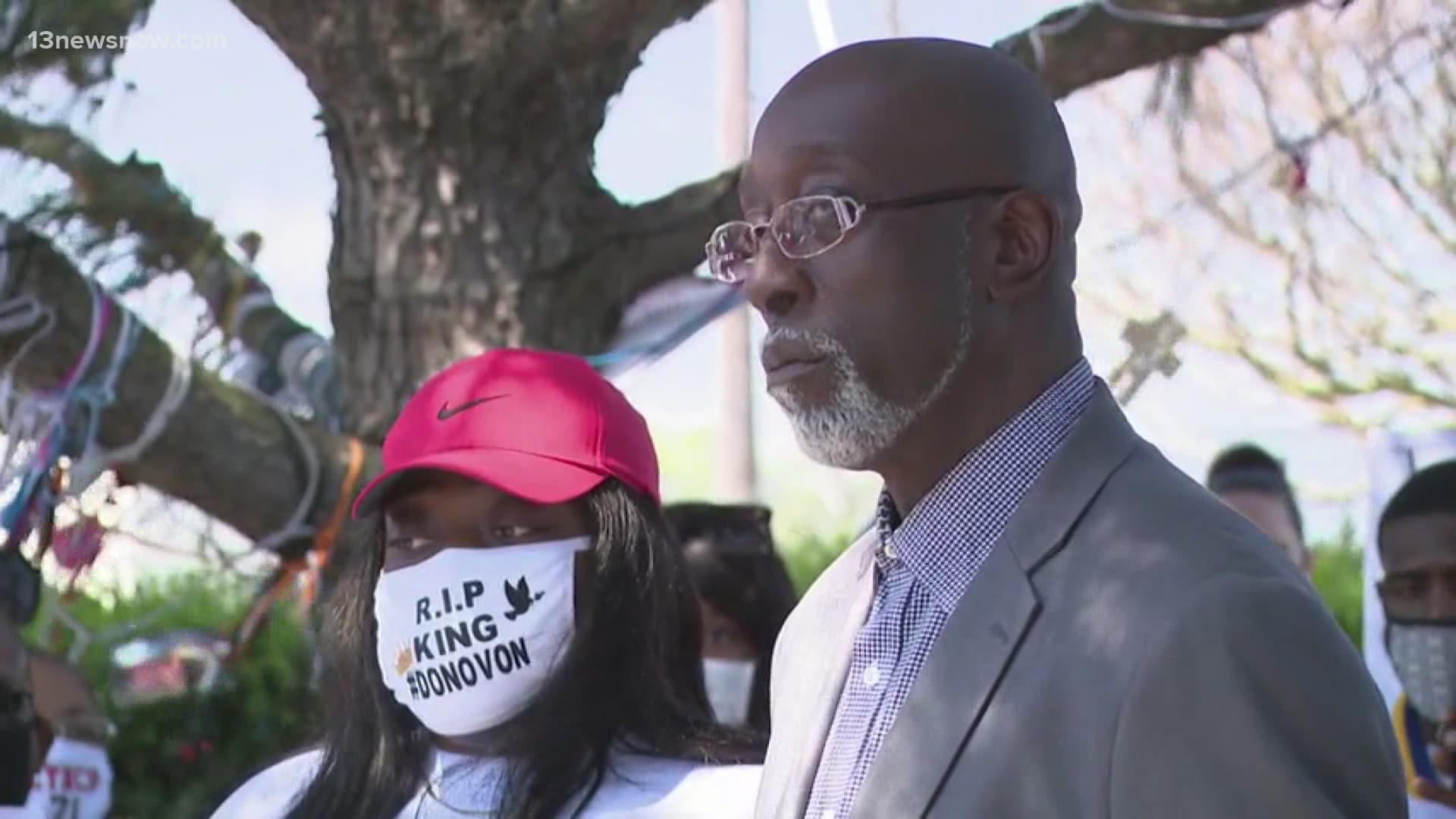 VIRGINIA BEACH, Va. — The family of Donovon Lynch held a press conference Monday to officially call for a federal investigation into his death.

“This is not over, this is just beginning, we want justice for Donovon Lynch and we will get it," said Wayne Lynch, Donovon's father. "We're heartbroken, angry."

Lynch died after being shot by a police officer at the Oceanfront on March 26.

Many questions still stand about the fatal encounter that night. There's no footage of the incident since the officer's body camera wasn't activated.

Police already said that Lynch had a gun on him that was recovered from the scene, but it's unclear if the firearm was part of how the police encounter escalated to a shooting.

During the presser, the family's lawyer, Jeff Reichert, said he obtained new evidence that Lynch's body was moved to another location after he was shot.

Jeff Reichert - attorney for Lynch family - says he has evidence the body of #DonovonLynch was moved to a different spot during the investigation. He says he knows witnesses that haven’t been contacted. Also criticizes the use of the word “brandishing” in VBPD release #13NewsNow pic.twitter.com/qo6B7bSsaw

Reichert also said another officer shot a person in the hand who tried to help Lynch, but that officer hadn't activated his body camera either.

“Nobody has talked to that person, nobody knows [that witness] exists, because if they went after that person the whole crime scene and narrative is shot," Reichert said at the news conference.

Reichert said investigators haven’t reached out to the witnesses who tell him there are problems with the investigation. However, he also said the witnesses won’t talk to the Virginia Beach Police or Virginia State Police because they don’t trust them.

“To allow the witnesses to talk freely with the right people and get the truth out, it has to be a federal investigation," he said.

Lynch’s family wants the Virginia Beach Police to retract a statement about Lynch “brandishing” a gun, because they say there’s no evidence of that and Lynch was a licensed gun owner.

They also asked for the names of police officers involved and a more powerful citizens’ review board for police accountability at the news conference.

Lauryn Lynch, Donovon's sister, said she has a difficult time answering questions about how she's handling her brother's death.

"I’m angry because of the type of person Donovon was, we talked about our dreams, goals, what our future holds, and to know that was just taken from him," she said.

Reichert said the autopsy report shows Lynch was shot twice, first in the leg and then in the chest. He also said Lynch’s time of death was 15 minutes after he was shot.

Virginia State Police is leading an independent investigation into the shooting. They've already put out a call to the public asking for witnesses who might have cellphone or surveillance video of the incident to come forward.

Virginia Beach City Manager Patrick Duhaney responded with a statement, confirming that police officers moved Lynch after he was shot "in order to render aid in a safer area."

“With condolences to the Lynch and Harris families, we reaffirm our commitment to thorough investigations into the circumstances of the deaths of Donovan Lynch and DeShayla Harris on March 26, 2021. The City has already demonstrated its willingness to have a separate investigation into the officer involved shooting by asking the Virginia State Police to assume responsibility for it. Should the federal government decide to become involved in the investigation, the City will cooperate fully. In the meantime, we encourage anyone with information in this case to contact the Virginia State Police Bureau of Criminal Investigation at (757) 424-6800 or by email at questions@vsp.virginia.gov. Anonymous tips are welcome.

We are restricted in our ability to provide information while the Virginia State Police investigation into the officer involved shooting is under way, however, we can clarify the circumstances regarding the movement of Mr. Lynch after the shooting occurred. In order to render aid to Mr. Lynch in a safer area, Virginia Beach firefighters and police officers carried Mr. Lynch about half a block east on 20th Street between Atlantic and Pacific avenues. Ms. Harris was found at the corner of Pacific Ave. and 19th Street and first responders rendered aid to her in that location. At no time were Mr. Lynch or Ms. Harris moved to be proximate to each other.

EMS and Fire crews followed guidelines for responding to active shooter and multiple casualty incidents. In those cases, patients are rapidly removed by rescue teams to secured areas where more effective treatment can be safely provided. Mr. Lynch was moved a short distance away where additional medical personnel and lighting were available. Mr. Lynch was determined to be deceased at the scene by EMS and Fire personnel shortly after he was moved. At the time of the incident, EMS and Fire crews were responding to multiple reports of injured persons at different locations in the area. Eight patients were ultimately transported to the hospital.”

Community members backing the family in their pursuit of a federal probe were also present at the press conference.

Norfolk native and NFL Hall of Famer Bruce Smith was there to kick off the presser and demanded transparency.

Smith calls for “transparency, the truth and justice served.” Gives condolences to the DeShayla Harris and Lynch families. @13NewsNow pic.twitter.com/dyeXvg4SPZ