For the first time since the pandemic, an inside-look at the progress of USS Gerald R. Ford

Commanding leadership is optimistic about the direction of the aircraft carrier. 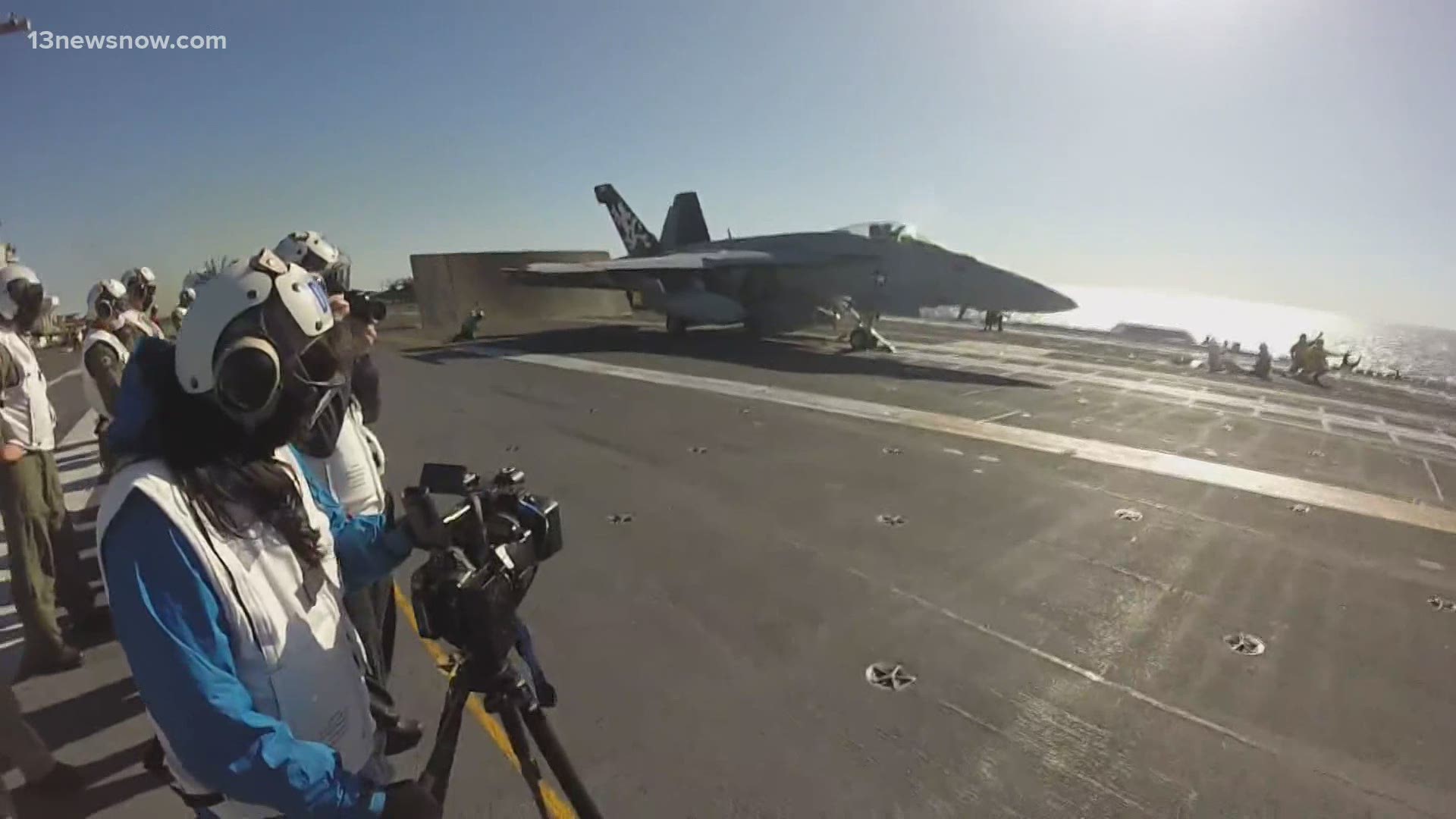 As of November 2020, the aircraft carrier has entered "First fully-integrated Carrier Strike Group operations," another step in the timeline toward the ultimate goal of having the ship deployed as a fully ready combat carrier.

On Tuesday, 12 planes soared to the sky in a matter of minutes, a trial demonstration for media to show the speed of the crew's operations and flight deck procedures.

“You saw operating at its best, a 57,000-pound aircraft going from 0-160 MPH in 2.5 seconds," Commanding Officer J.J. Cummings told media on Tuesday. “You just saw about 12 planes launch, using catapults one, three, and four."

The multi-billion-dollar Navy project has gone through delays, maintenance, and technical problems over the last several years, some of those including the proper working of the ship's weapons' elevators.

In April, 13News Now reported on USS Gerald R. Ford reaching a significant milestone by getting five of the ship's elevators working.

As of November's embark, seven of the ship's 11 elevators are now working as previously reported, with the rest expected to be completed in 2021.

“We were still struggling to get any of our weapons elevators up, as of 12-18 months ago we had tremendous problems with the radar on the ship," Rear Admiral Craig Clapperton, Commander for Carrier Strike Group TWELVE said.

Coming up tonight on @13NewsNow: The USS Gerald R. Ford is going through its 'First fully-integrated Carrier Strike Group operations.'

What exactly that means, and more on #13NewsNow. https://t.co/eGBRMBR8E3 pic.twitter.com/DA4RRHjONf

Other developments beyond the First fully-integrated Carrier Strike Group operations, has leadership positive about the direction of the ship's progress.

“What we’re really trying to figure out is what’s different about a Ford strike  group," Rear Adm. Clapperton said.

In a year as unprecedented as 2020, the Ford’s mission remains the same: working toward deployment as a fully-ready combat carrier, its trials now starting to become less of a test and more like the real thing.

“What it would look like on deployment, that’s what you’d see underway," CO. Cummings said.

“We are now doing integrated strike group operations, very similar to what you would see a carrier in workups doing," Rear Adm. Clapperton said. "This week, you’re starting to see an increase in complexity.”

According to military officials, Ford is complete with 70 percent of its Post Delivery Test and Trials. Ford is also serving as the only aircraft carrier regularly available on the East Coast to conduct carrier qualifications for Fleet replacement squadron pilots and student naval aviators.

“Still going to be a few years before the ship goes on deployment," Rear Adm. Clapperton said.