A driver was going almost 80 miles above the speed limit. State police posted a picture of the summons a trooper issued to call attention to the dangers of speeding. 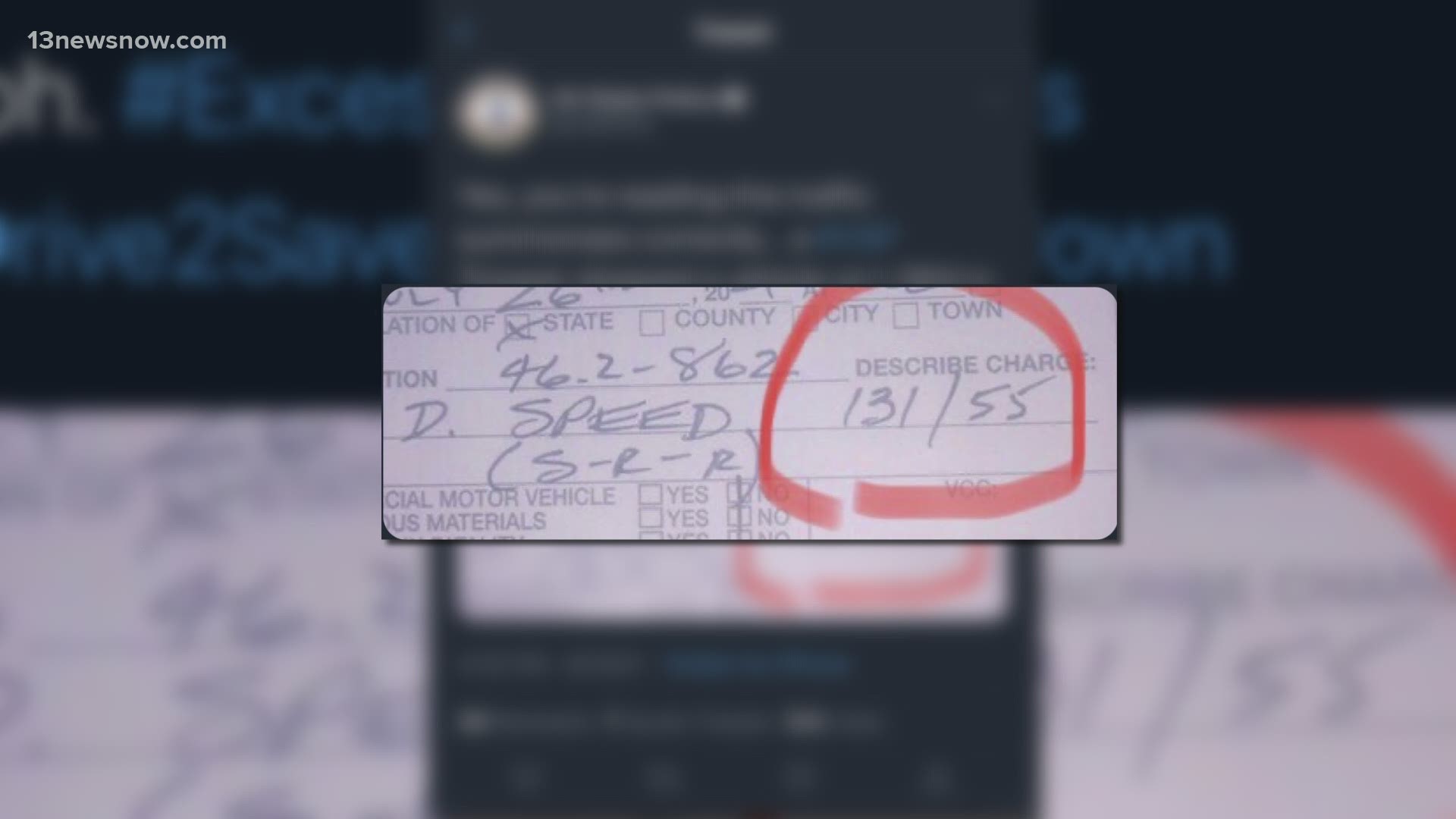 NORFOLK, Va. — Virginia State Police is posting some of its recent speeding citations on social media with the goal of warning people about the reckless driving that's taking place where they live.

On Sunday, a trooper pulled over a driver who was going 131 miles per hour in a 55 mile per hour zone on Interstate 564 in Norfolk.

“We do have troopers that stop those types of speeds every single day," said Sgt. Michelle Anaya with Virginia State Police.

Anaya said the area on I-564 where the driver was speeding was a straightaway near Naval Station Norfolk.

It wasn't the only high-speed stop that day.

“That trooper, right after that, made another stop for 94 miles per hour," Anaya said.

Troopers are posting some of the speeding tickets on social media. Anaya explained they are highlighting the kinds of stops troopers face in Hampton Roads and across the state.

“Making the public aware that speed does kill," she said.

Yes, you’re reading this traffic summonses correctly... a #VSP Trooper stopped a vehicle on I-564 in #Norfolk for 131 mph in a posted 55 mph. #ExcessiveSpeedKills #Drive2SaveLives #SlowDown pic.twitter.com/3l4zyr8joT

State trooper said a man who died on I-664 in Hampton on Friday was speeding when he came up on traffic that was stopped.

Kevin Riddick  swerved to avoid other cars, hit a barrier, and his car overturned several times. Riddick was thrown from the car.

RELATED: Deadly hit-and-run followed by hazmat spill on northbound I-664

Rosalind Powell drives on the highway every day to get to work. She said it doesn't take long before she sees a car speeding past her.

Powell hopes troopers keep posting these warnings and for people to stay more alert on the roadways.

“Bringing it to people's attention to slow down, slow down. It’s okay. You’re going to get there," Powell said.

According to Virginia law, anyone driving 20 miles above the speed limit or in excess of 80 miles per hour, regardless of the speed limit, can be charged with a Class 1 misdemeanor. The offense also could include fines and possibly jail time.