Why do we call police? | An analysis of 911 calls in Hampton Roads

With discussions of reform, training and funding, we examined how 911 call data shows the responsibilities of an officer and how the public uses law enforcement. 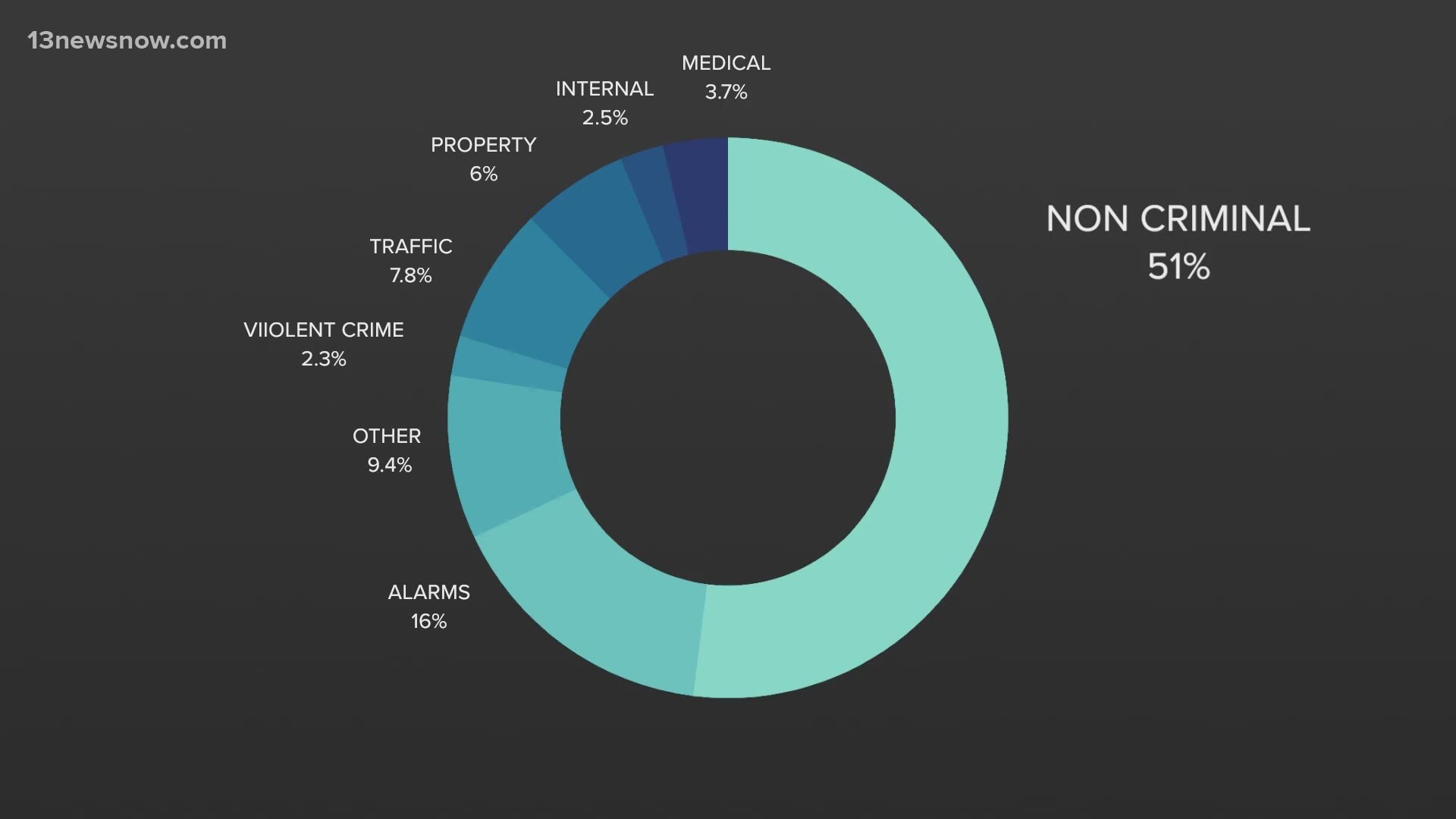 VIRGINIA BEACH, Va. — Hampton Roads police departments receive thousands, sometimes hundreds of thousands of 911 calls each year. Those calls are tracked by topic: anything from a noise complaint to a car accident to an armed robbery.

With discussions of criminal justice reform, police officer training and department funding -- questions of how officers are used and what we expect from law enforcement are significant.

The verdict? Most 911 calls are noncriminal - such as reports of a disturbance, or a noise complaint, or a suspicious person or vehicle.

Violent crime calls often account for the lowest percentage of calls for service, based on each city's reporting.

In Chesapeake, more than half of all 911 calls fit a "noncriminal" description, followed by 16% related to alarms or threats, about 9% related to "other crime" and about 8% related to traffic calls.

In Virginia Beach, 27% of calls are noncriminal, followed by traffic calls at 14% and medical or person-in-need calls at 10%.

Throughout the Seven Cities, violent crime 911 calls account for 3.36% of calls for service. Additional statistics can be found at the end of this article.

The breakdown illustrates the breadth of current responsibilities for police officers.

"We ask police to do a lot, they are law enforcement but also community members, healthcare providers, mental health consultants, they have a lot on their plate," said Norfolk Delegate Jay Jones.

Jones is part of a group of Democratic state lawmakers who introduced and passed police reform bills this fall, signed into law by the Governor yesterday.

Here's a rundown of new criminal justice and police reform bills in Virginia that @GovernorVA just signed into law. I have an in-depth story coming tomorrow at 11 on #13NewsNow that will examine some of these changes.https://t.co/qvjNglb6rm

The laws include banning no-knock warrants and most chokeholds, mandating officer intervention if another officer is using excessive force, enabling citizen review boards and making it easier to decertify officers who commit misconduct.

Some of the new laws require additional training.

“I don’t think this is what we envisioned when folks joined the police force, but I think they understand the task at hand and they rise to meet the moment," Jones said.

Virginia Beach Delegate Jason Miyares, a Republican, criticized some of the new laws, saying they could make law enforcement harder.

“All of us want the same thing, which is obviously to get rid of bad cops. I think you do that with additional training," Miyares said.

Miyares pointed out the growing need for crisis intervention training.

“There is a mental health crisis in this country so officers are increasingly having to deal with people who are dealing with serious mental health issues," he said.

In Virginia, crisis intervention training could include a new, proposed MARCUS Alert – a system designed to respond to people in psychiatric crisis without police force.

It’s named for Marcus David Peters, a biology teacher who was shot and killed by a Richmond Police officer during a mental health crisis in 2018.

“I think sometimes the show of force is not needed, and I only can go to what I’ve seen myself with William Chapman, my cousin.”

Chapman is the 18-year-old Portsmouth man who was shot and killed by Portsmouth Officer Stephen Rankin in 2018. Rankin was later found guilty of voluntary manslaughter.

Sparked by protests this summer, including many in Hampton Roads, Virginians are reevaluating the evolving role of officers.

Our analysis of 911 calls for service shows how much community members rely on police officers for things other than violent crime. Lawmakers are asking - will continued additional training stretch departments too thin?

“And so yes when you’re adding an extra layer that’s obviously something for concern but the question is what do you replace them with," Miyares said.