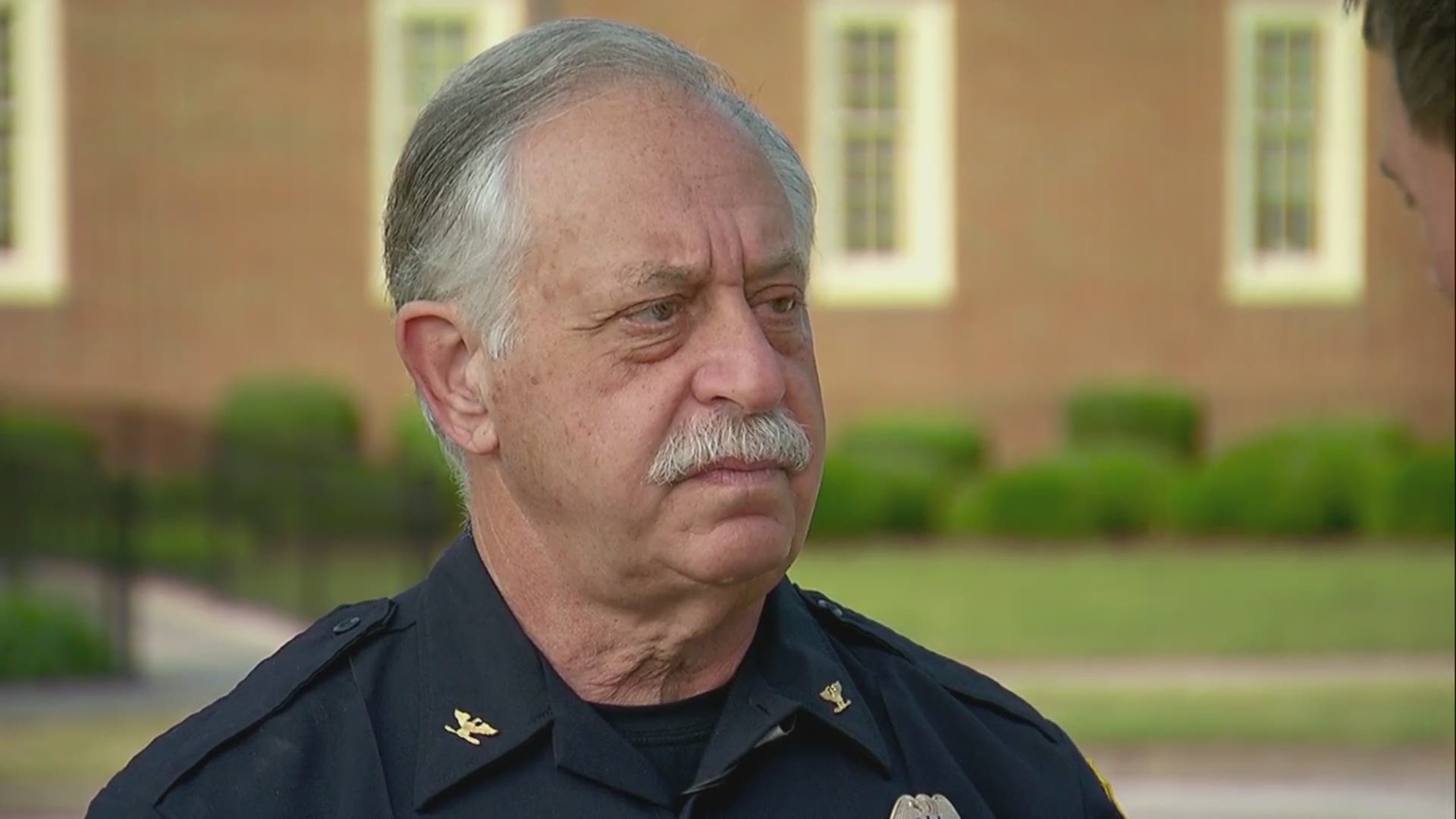 VIRGINIA BEACH, Va. — The first call of shots fired came in around 4:08 p.m. on a Friday and within minutes, four officers arrived at Building 2 of the Virginia Beach municipal center.

It set off events that led to 12 city employees killed and one gunman taken down by police.

Over the next 20 minutes, four police officers would engage in a gun battle with the suspect. One of the officers was wounded during the chaos.

"Within minutes officers had arrived on the scene. These four officers, who work in different units by the way, but we train the same way. Two of our officers were K-9, two were detective supervisors."

It was around 4:10 p.m. when officers entered the building.

Between 4:15 to 4:18 p.m. officers made contact with the gunman on the second floor. He was on the move when the shooting with the officers began.

After shooting one of the officers, the gunman retreated into an office where he was firing through the door and wall, Cervera said.

It was around 4:44 p.m. when officers breached the door and entered.

The officers took the suspect down but immediately tried to save his life.

"That's what we do on all of our cases. They believe in the sanctity of life. No cop gets up in the morning and wants to end up at a scene like this but then they do it and then they did transition into the first aid mode," Cervera said during an interview with ABC News.

The gunman, 40-year-old DeWayne Craddock, died while being taken to the hospital, he said.

Cervera said that outside, between the 4:15-4:18 timeline, additional officers began entering the building.

'The size of this particular case'

Chief Cervera said the city has never dealt with a case of this magnitude — and with that comes the need for more outside resources.

"We've had plane crashes, we had a civil disturbance, other types of police-related issues but nothing of this magnitude," he said.

"This intensity and the response we had to give to a situation like this."

About 40 FBI agents are going room to room in the municipal building meticulously gathering evidence.

The FBI's evidence recovery team has the lead because of the size and scope of the case.

"Our forensic team does a fantastic job but it's just they would've been inundated with the size of this particular case," he said.

It's a puzzle that investigators are now putting all those forensic pieces together to reconstruct the entire incident. In addition to the FBI, other federal agencies also are assisting in the investigation.

There are also victim advocate positions helping families, coworkers, and citizens who need assistance "to get through the next couple weeks."

1 / 11
Ali Weatherton, 13News Now
Virginia Beach Police Chief James Cervera consoles a mourner at a memorial set up for the victims of the shooting at the Virginia Beach Municipal Center.

Cervera said the department understands the importance of its officers' emotional wellness.

"Not only the physical wellness of an officer but the mental, emotional wellness. It's coming to the forefront of policing. After working x number of cases, not of this size, but of working cases every day it begins to build up," he said.

"To walk into something like this is absolutely horrific for the average person. The officers, again, they put that aside. They went and they engaged with the suspect as quickly as they could. Basically, they saved a number of lives inside that building."

He said it's an emotional challenge the rest of a police officer's life.

"They took a human life. He did what he did, but then they took his life. They will remember that forever," Cervera said.

"And that's something the general public needs to understand that it's not where we are now where we could stop and retake something; it's live, it's real, it's at that moment."

Cervera said police officers are human and have to make quick and decisive decisions under pressure.

"Now make that decision with an individual who is armed with a gun, who is firing at you with multiple weapons while we're moving."

'Looking for a motive'

Authorities now are trying to find a motive on why this shooting happened.

Cervera reiterated during Sunday's press conference that the mass shooting suspect was not fired from his job as an employee of Virginia Beach.

Virginia Beach City Manager Dave Hansen did confirm that the suspect resigned by email on the day of the shooting.

There are still four victims in critical condition at two hospitals.