TIMELINE: A break down of the Virginia Beach Municipal Center shooter's last day

Virginia Beach Police Deputy Chief Patrick Gallagher provided a full breakdown of the shooter's final moments and the moments leading up to the shooting. 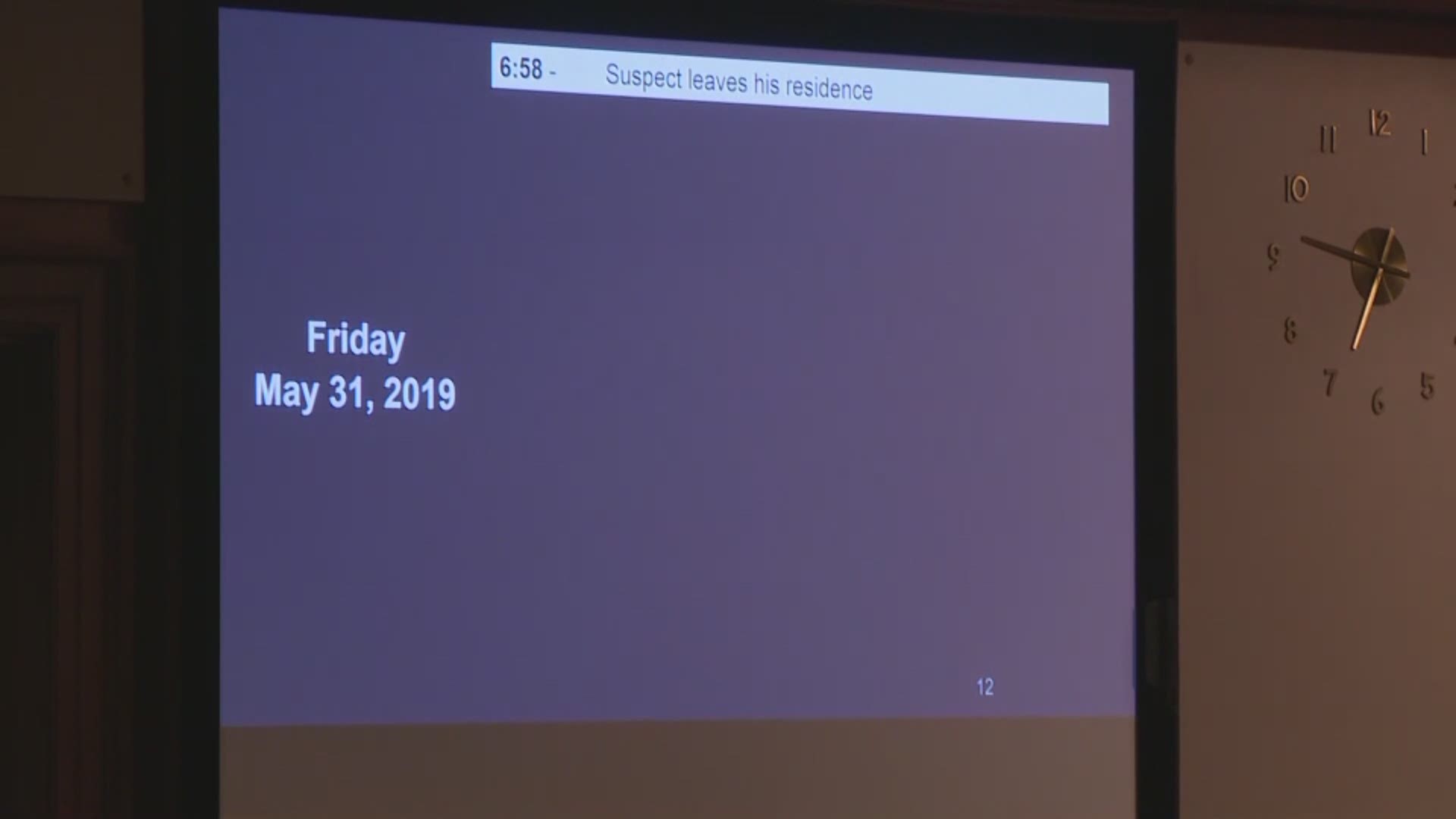 VIRGINIA BEACH, Va. — Editors Note: The Virginia Beach Police Department released slight time changes or updates to events after receiving new data on 10/22/2019. This article has been updated to reflect that update.

During a briefing, the Virginia Beach Police Department announced a detailed timeline of the shooter's final day.

The timeline comes from the criminal investigation police are still working on.

According to the timeline created from the police investigation, 10 people were killed and two people were injured before the first 911 call was made.

Here is the full timeline:

7:23 a.m. - He started up his work computer and checked his emails.

RELATED: Official: Gunman's resignation email had no sign of shooting

10:46 a.m. - The first-line supervisor responded with the resignation information to the suspect and copied the mid-level supervisor.

12:08 p.m. - The suspect swiped his card for entry at the 2nd Floor Engineering North Hall.

1:04 p.m. - The suspect and 2 co-workers left Building 2 and drove together in one vehicle.

1:06 p.m. through 3:06 p.m. - The suspect and two co-workers visited three project sites as part of a routine "ride-around" inspection process.

3:55 p.m. - The suspect sent another work-related email and left the building.

Deputy Chief Patrick Gallagher, who presented the timeline, explained that there was nothing out of the ordinary about the emails the suspected shooter sent that day.

"In none of those emails I described was anything out of the ordinary. They were generic, municipal, work-related typed of emails," explained Gallagher.

Gallagher said the suspect left the building through the south exit of Building 2, went to his car and got a gun.

The next part of the timeline is based on witness interviews, key card records and reenactments, according to Gallagher.

About 4:00- 4:03 p.m. - The suspect shot his first victim who was in his car. The victim died. The second victim was also killed outside.

About 4:03 p.m.The suspect entered the south entrance of Building 2. He kills one person in the stairwell and walks upstairs toward the 3rd floor.

About 4:04 p.m. - The suspect walked to the third floor of the building where he killed five more people and injured two others.

4:05.56 p.m. - The suspect's card was swiped his card at the 2nd Floor east side of the building and killed two more victims.

At this point, 10 people are dead and two are injured.

About 4:10 p.m. - The suspect walked to the 3rd Floor and injured another person.

RELATED: 'You are heroes who serve our community every day...' | Shooting survivor thanks first responders

4:11 p.m. - The suspect walked back to the 2nd Floor and someone there pulled the fire alarm.

4:15:07 p.m. - The suspect swiped his card at the east side of the 2nd Floor where he killed another person and injured one more.

"Over the next three minutes, the suspect attempted to ambush the officers and as was described, the 'horrific gun battle will occur," Deputy Chief Gallagher explained. The gunfight took place through a closed, wooden door.

RELATED: Neighbors of Virginia Beach mass shooting gunman say he 'kept to himself'