Here's a look at what Tropical Storm Isaias left in its path. 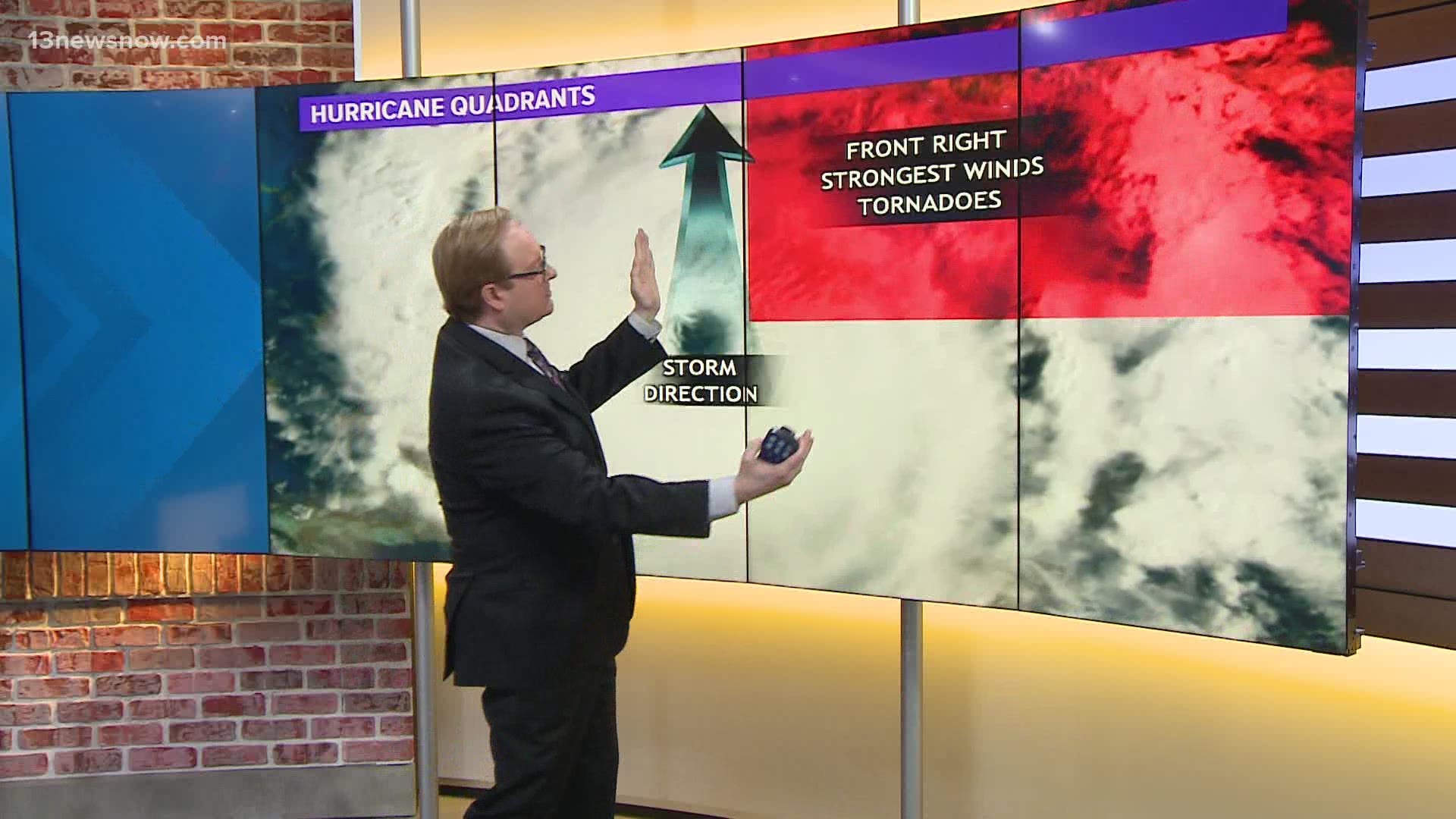 NORFOLK, Va. — We're continuing to track the effects of Isaias on our area. Check back here often for updates.

By about 2 p.m., Dominion Energy crews had finished cutting limbs off of a tree that downed power lines and blocked traffic on Croatan Road in Virginia Beach.

That freed up city crews to start breaking up the body of the tree, which was blocking access in and out of a neighborhood.

Officials still said it could take hours to clear the tree from the roadway, and restore power to the area affected.

By the latest York County Isaias update, 35 trees had been knocked down, and six of those landed on structures.

The county is offering to collect debris from residents who report a need by Tuesday, August 11. You can report debris online or by calling (757) 890-3780.

Many attractions in Yorktown were closed for the storm, including the Yorktown fishing pier, boat docks and Beach Picnic Area. Area trolley service was also temporarily shut down.

The spokesperson said two homes were damaged in the storm on Tuesday morning: trees fell on one mobile home and one town home.

No injuries were reported in the update.

There was a suspected tornado in Governor's Land, and the National Weather Service was scheduled to come out and confirm or deny that designation.

By the latest update, 6,209 people were out of power in the area. The county's release said Dominion was preparing a multi-day restoration effort.

To report downed trees across roadways, call the Virginia Department of Transportation at 800-367-7623.

Dare County says unrestricted access to Hatteras Island will begin at 2 p.m. for people who live there and for vistiors.

Officials said there wasn't a huge impact to Hatteras from Isaias.

Sand and water still area on some roadways in low-lying areas prone to soundside flooding, particularly along Highway 12 south of the Etheridge Bridge.

A Facebook page for the Lago Mar community in Virginia Beach shared some photos of flooding in the area.

"Winds are still gusty out of the south, so the current flooding will continue, and possibly continue to rise," moderators wrote.

Sandbridge Road in Virginia Beach was closed just before 11 a.m. because of flooding in the area.

City officials tweeted that there was also a tree on a power line in the area.

Drivers should avoid that road between New Bridge Road and Sandpiper Road.

There's now some aerial footage of the damage to a mobile home park in Bertie County, North Carolina, where at least one person died on the morning of August 4.

By 10:30 a.m., rescue teams were still searching for three to four people who were reported missing from the park.

A sheriff who was well familiar with the area told reporters the scene was "out of a movie." The sheriff said it didn't look like there were ever homes in the area. 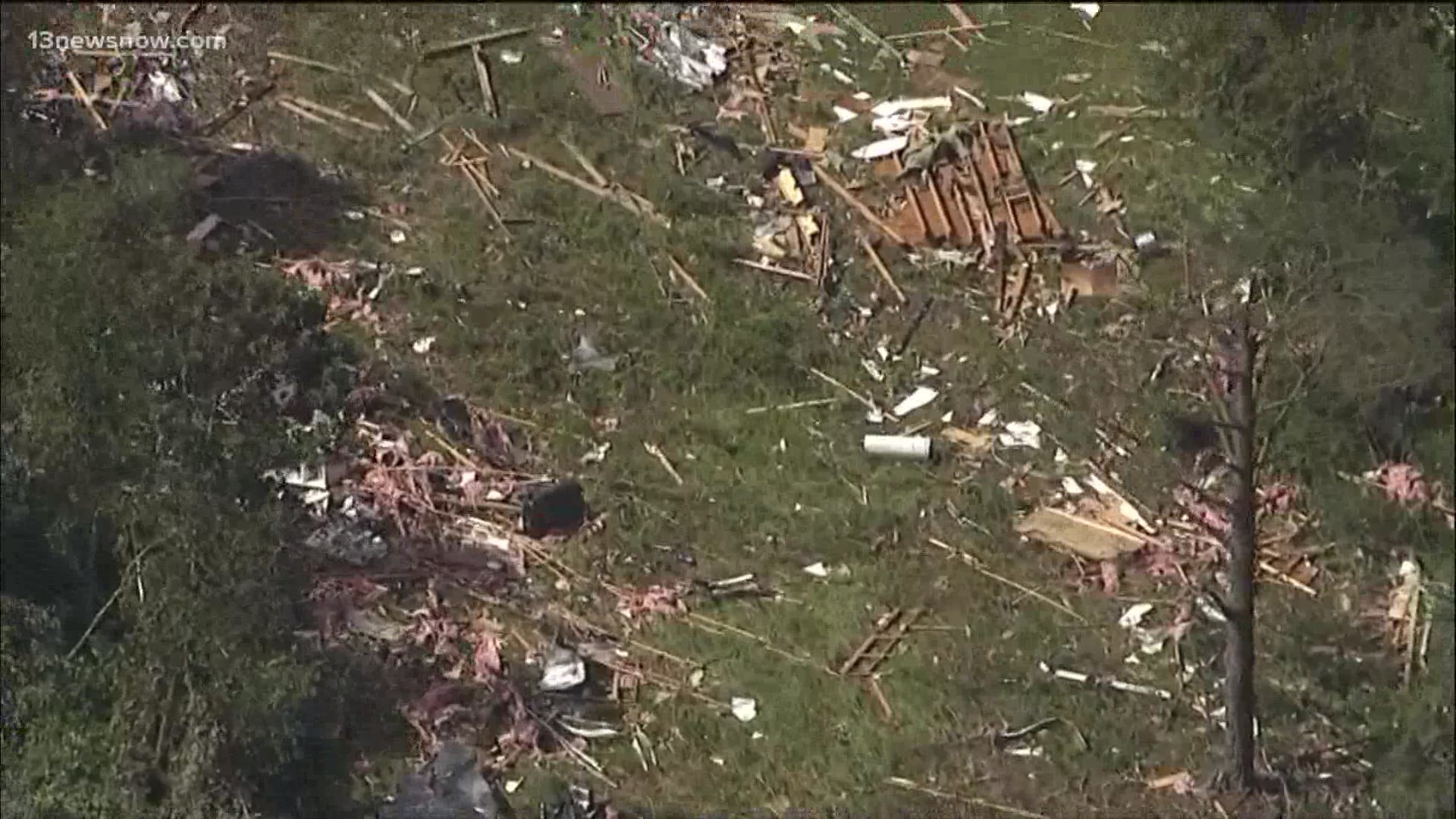 The Chesapeake Bay Bridge-Tunnel is operating under Level 4 wind restrictions.That means the only types of vehicles allowed to cross are cars without exterior cargo, pick-up trucks without cargo, mini-vans, and SUVs. Maximum safe speed is 45 MPH.

The Virginia Beach Fire Department was on the scene just before 10:30 a.m.

While they responded to the scene, one lane of North Great Neck Road was blocked off.

Dare County says it started initial damage assessments. So far, the information officials have indicates there was minimal damage from Isaias. There are scattered power outages across the Outer Banks. Some soundside water is rising, but conditions should be improving.

First Baptist Church in Norfolk at 38th Street and Bluestone Avenue had significant damage to it. Practically the entire front of a section of the building came off.

MAJOR #Isaias damage at the First Baptist Church in Norfolk on 38th Street and Bluestone Avenue. This wall collapsed onto the sidewalk and street below, bricks all over the ground and the area is taped off #13NewsNow pic.twitter.com/RVpPkKR1AC 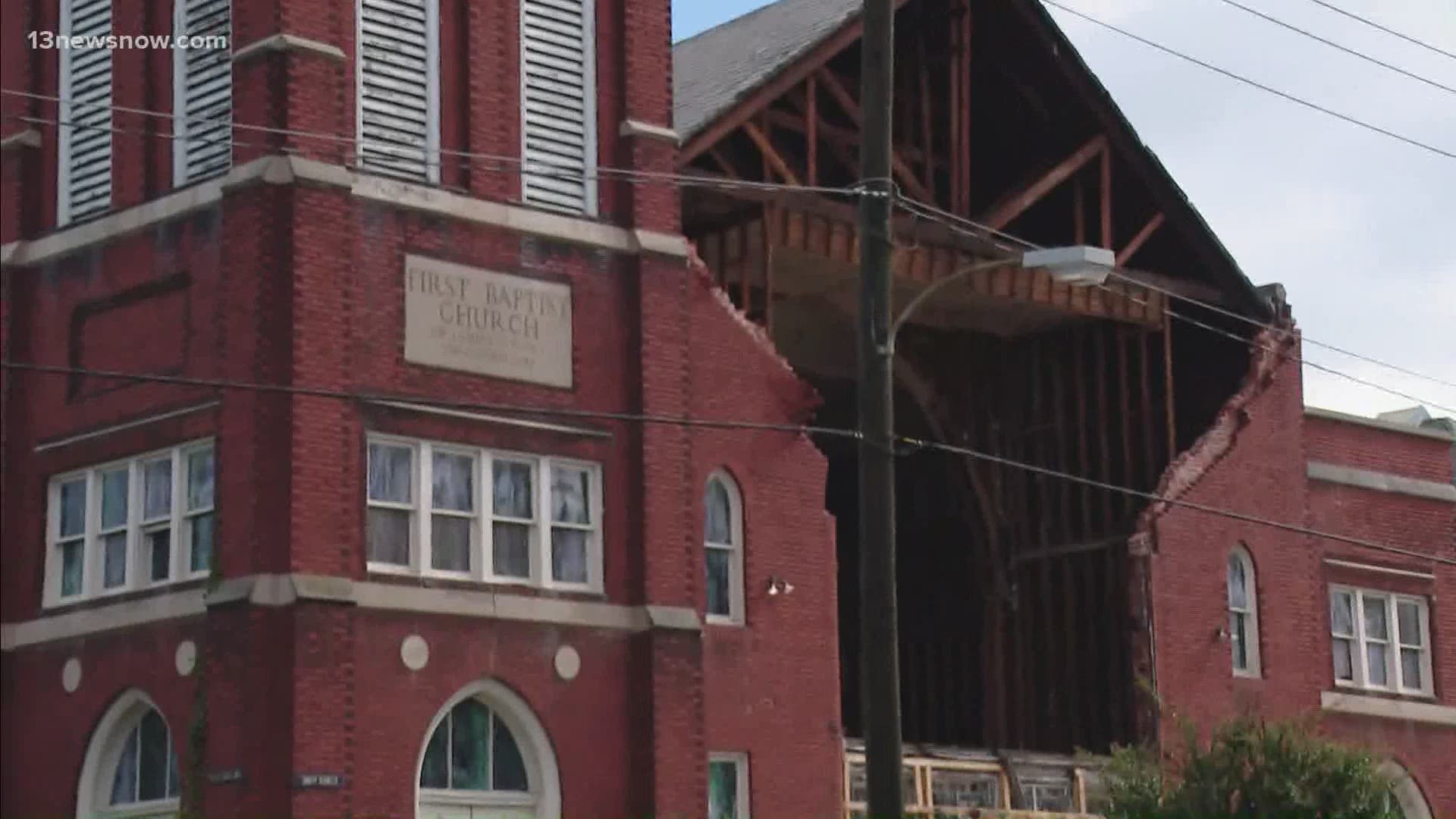 The Bertie County Sheriff's Office is searching for three to four people who are unaccounted for in the Morning Road area of the county. That's near Windsor, North Carolina.

The area has been blocked off to visitors while first responders survey the damage left by a tornado this morning, and work to locate the missing people.

People have been sending in photos of storm damage all morning, along with our crews in the field. Here are some of the images from across the area.

There's no other word on the person's identity. Bertie officials have not spoken out about the fatality. 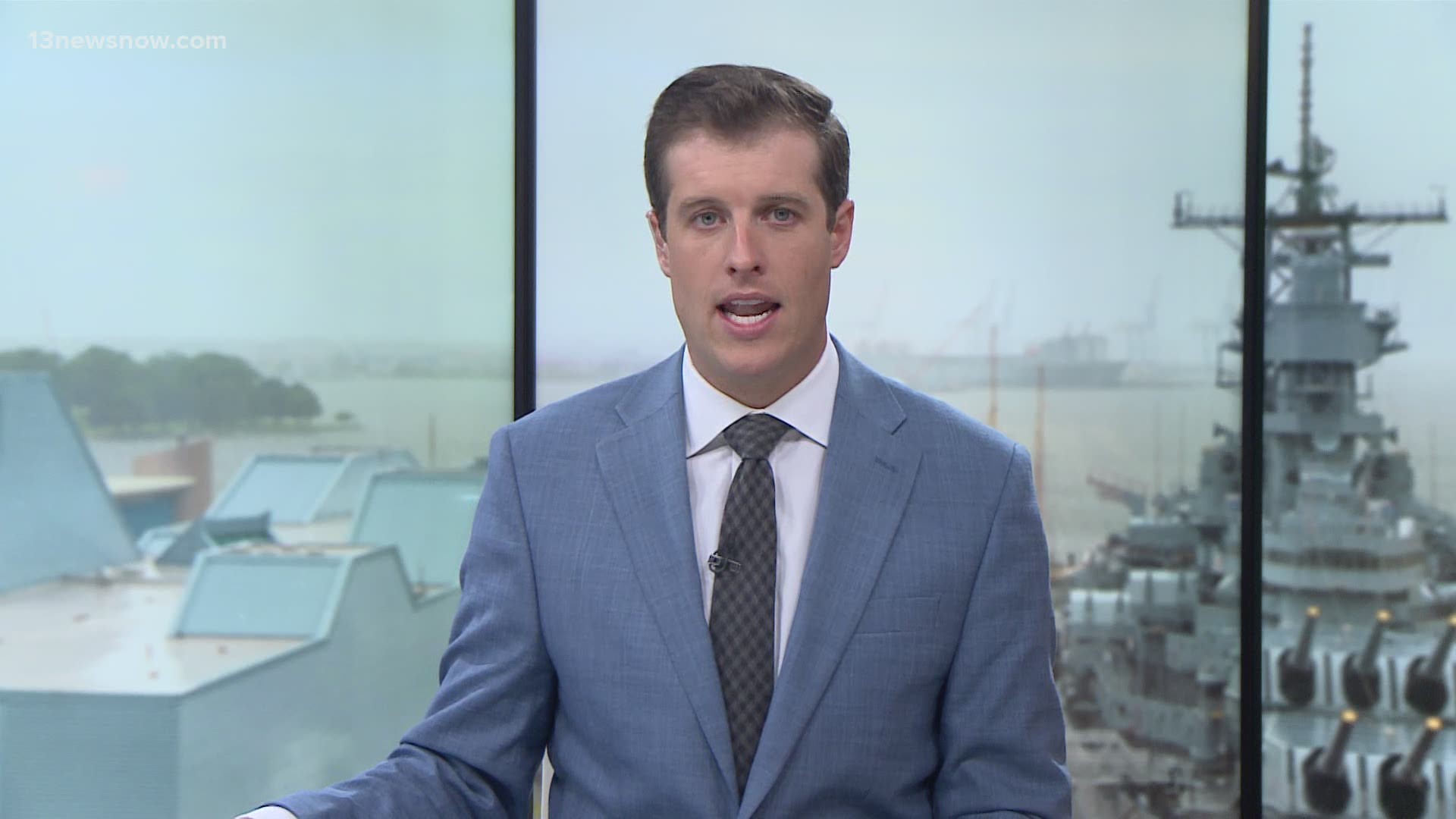 North Carolina Governor Roy Cooper confirmed that there had been at least one death in the Tarheel state, caused by Tropical Storm Isaias.

He did not say where the death occurred, or what happened in the situation.

Viewers around the region have sent in photos of storm damage, including trees downed, roads blocked and buildings stripped of walls. 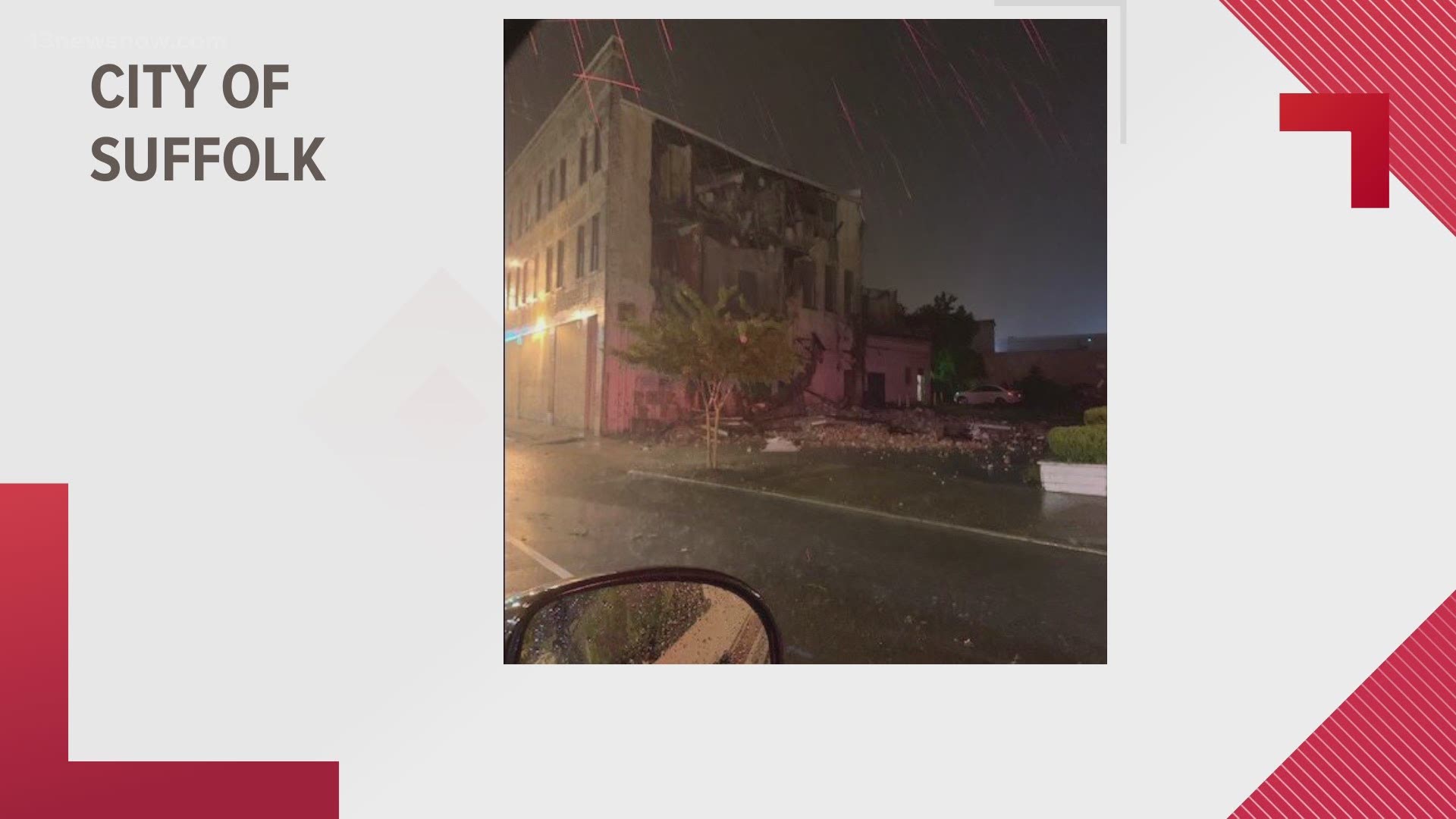 Bonita Billingsley Harris, the spokesperson for Dominion Energy, said about 35,000 people were without power in Virginia Beach.

Billingsley Harris said the company would prioritize returning power to that city throughout the morning.

Dominion is reporting more than 200,000 customers without power.

In southeastern Virginia and northeastern North Carolina, there were more than 170,000 outages.

Here are some of the local breakdowns:

Bertie County in North Carolina confirmed that a tornado touched down in Windsor earlier this morning.

A post by the county said it affected the area near Morning Road.

By about 6:30 a.m., first responders were still working in the area.

Billy Winn said officials had monitored a tornado signature in the area, and this morning, were seeing "damage to buildings, roofs blown off of homes there."

Winn said there were some trees and limbs down in Gates County, but said the damage wasn't significant.

The Brandon House, a furniture store in Suffolk, reported heavy damage at its storefront on West Washington Street. It wasn't the only business in that area affected by Isaias.

The small business has been in operation for 65 years. This morning, the owner said they might have to operate from across the street, if the damage was very extensive.

They were waiting on first light to get a better view of the damage, and hoped to call an insurance agent out to assess the full situation.

DOWNTOWN SUFFOLK DAMAGE: Storefronts along W Washington street took a hard hit during the storm. This is the Brandon House. Most of the front windows are blown out. A look at the damage coming up on #13newsnow pic.twitter.com/vv9oZt3KH1

A family in Poquoson said a large branch fell on their trailer home around 1:30 a.m. This is off Wythe Creek Road.

Luckily, everyone who lives in the home is okay. 13News Now reporter Niko Clemmons reviewed the damage at the scene. 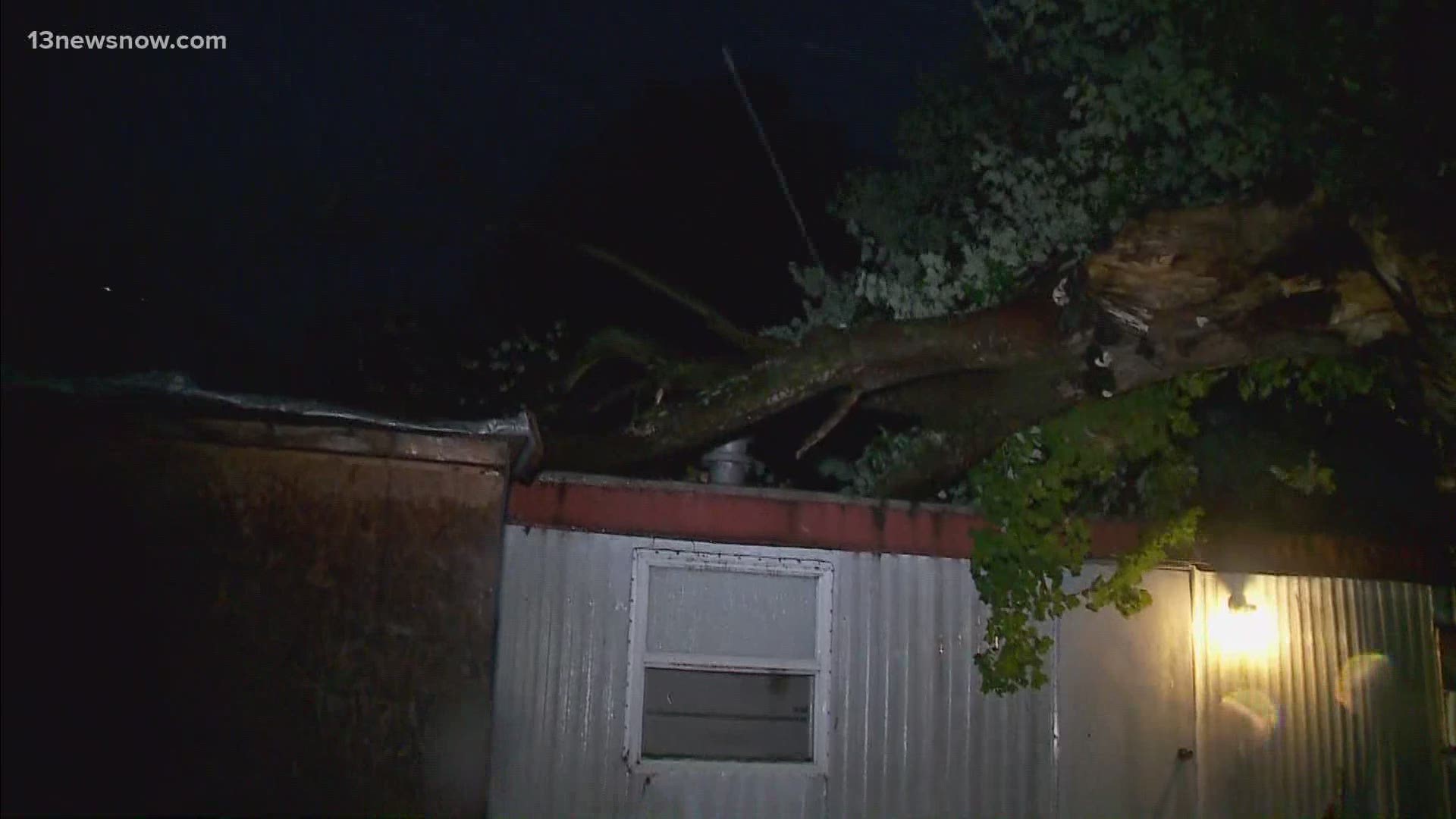 A spokeswoman for Elizabeth City, Camden and Pasquotank County Emergency Management said that although some branches are down in Elizabeth City, no serious damage has been reported for that area so far.

However, Christy Saunders said just southwest, in Bertie County, there could be more damage.

The Bertie County Sheriff's Office confirmed they did see some storm damage, but could not describe how widespread it was by 5:30 a.m.

A spokesperson for Hertford County, just below the Virginia state line, said the area had experienced significant damage, but did not give the specific cause or details.

Suffolk is reporting heavy storm damage. Here's footage from a reporter on the scene, just off of Culloden Street.

A current look at what this neighborhood in Suffolk is dealing with as the city is under a Tornado Warning 🌪⚠️ This is off of Culloden St. #13NewsNow #ISAIAS pic.twitter.com/vTjqWrm89S

The Chesapeake Bay Bridge Tunnel was closed due to high winds in the area.

#BREAKING: The CBBT is currently closed to all traffic due to inclement weather conditions. Earlier winds were reported there around 60mph. #13NewsNow @13BethanyReese

Suffolk officials confirmed there was storm damage in the Riverview neighborhood.

Tornado Warning ⚠️🌪 Currently here in Downtown Suffolk where the damage is severe! #13NewsNow Congested roadways with fallen trees and slanted power lines. Keep you updated throughout the morning. pic.twitter.com/zO5kqdoer3

By about 5:05 a.m., there were more than 75,000 power outages in southeastern Virginia and northeastern North Carolina.